Maryam Rajavi: Time for urgent action to compel the mullahs’ regime to stop torture and execution of those arrested during the Iran uprising 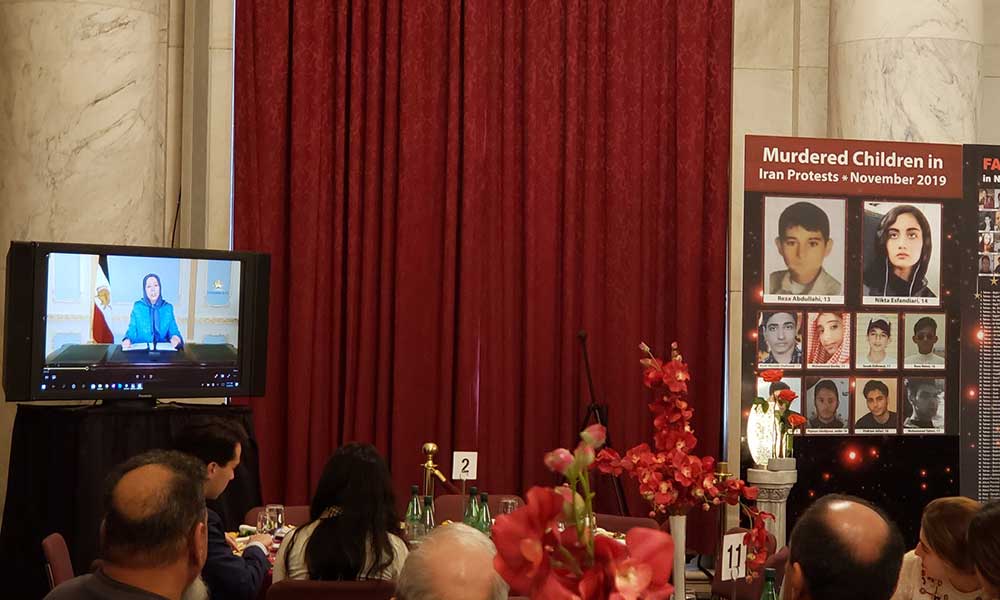 I would like to express my gratitude for your interest in the Iranian people’s struggle for freedom in Iran.

In recent days, a number of distinguished senators from both parties extended their support to the Iranian uprising.

They showed that the representatives of American democracy stand by the people of Iran.

On behalf of the people of Iran, I sincerely thank them.

Honorable personalities,
The Iran uprising which started on November 15th spread to more than 200 cities across Iran in just a few days. The mullahs’ reaction has been ruthless. They have murdered in cold blood more than 1,000 protesters in the streets. There are shocking video clips showing revolutionary guards directly shooting at young people.

One clip from the northern city of Gorgan shows an IRGC commander shooting a young man from close range. Then another guard strikes him with an axe.

But the brave young Iranians have remained defiant in face of this brutality. Vast regions of the city of Shiraz in southern Iran, with 2 million residents were in the hands of people for two days.

In some other cities, people took over the control of many districts from the IRGC.
The people of Iran showed that they will not be satisfied with anything less than the regime’s overthrow.

First, the mullahs’ regime has no support among the people and lacks legitimacy.
Second, the regime has no solutions to offer for political and economic crises.

Third, the MEK’s efforts to build an organized movement succeeded. The resistance units of the MEK played a key role in the uprising.

Fourth, the answer to the problem of Iran is to overthrow the religious dictatorship, which is the desire of the Iranian people.

The solution for the crises in the Middle East, from Iraq, to Yemen, to Syria and Lebanon, is the overthrow of this regime.

The regime considers murder and suppression as its only means to remain in power.
But nothing can deter the Iranian people from fighting to achieve their goal of freedom.

Distinguished guests,
Unfortunately, the international community has not responded to all these arrests and carnage properly.

I call on the international community to uphold its responsibility to end this impunity.

It is time to compel the regime to stop torture and execution of those arrested during Iran protests.

Governments and the international community must set aside any consideration or accommodation vis-à-vis the Iran’s ruling theocracy and demand an immediate stop to the killings and arrests. And if the mullahs’ remain defiant, the UN must decisively put in place Security Council sanctions.

The United Nations Security Council must declare the leaders of the clerical regime and those in charge of suppression of the uprising as criminals committing crimes against humanity so that they face justice.

The world community must strongly condemn the regime’s Internet terrorism and assist the Iranian people to break this inhuman blockade. This regime only understands the language of power and firmness. The mullahs must be prevented from shutting down the internet in critical situations.

By using different ploys, the regime is trying to conceal the actual number of those killed and imprisoned. The UN must urgently dispatch fact-finding missions to Iran to ascertain the extent of the number of the martyrs, the wounded and the prisoners. Considering that many of those detained face torture and execution, the dispatch of such missions has absolute priority.

It is time for the international community, especially the European Union and the United States, to recognize the struggle and the resistance of the Iranian people to overthrow the clerical regime and support their right to resist against suppression and repression. The people of Iran expect Congress to lead the way in recognizing this noble right.

A free and democratic Iran is not only the urgent desire of the people of Iran but is essential for peace and security in the Middle East and the world.
I thank you very much.