The National Council of Resistance of Iran (NCRI) : Iran Opposition Parliament in Exile 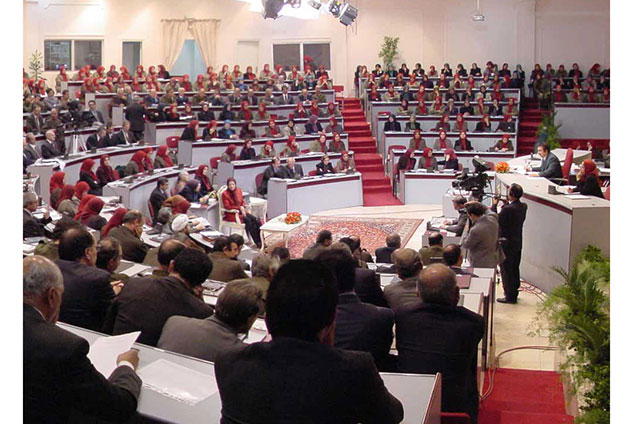 On July 21, 1981, marking the anniversary of the Iranian people’s uprising in 1952 against the Shah and in support of the nationalist leader Dr. Mohammad Mossadeq, and one month past the beginning of mass executions of the regime’s opponents, Mr. Massoud Rajavi, then leader of the opposition People’s Mojahedin Organization of Iran, announced in Tehran the formation of a coalition of democratic opposition forces seeking to overthrow the mullahs’ Velayat-e Faqih regime and establish a pluralistic democracy in the country.

Ten days later, Massoud Rajavi flew to Paris. The President of the National Council of Resistance of Iran (NCRI) set up his headquarters in Auvers-sur-Oise, north of Paris, which rapidly turned into a focus of attention for policymakers and reporters in France and other countries.

In autumn 1981, the NCRI began a series of intense and lengthy meetings in which its members drafted and adopted the Council’s constitution, its platform, and the immediate tasks of a provisional government as well as the NCRI’s internal modus operandi. All of the adopted documents were immediately published.

The National Council of Resistance of Iran has also adopted a number of plans for Iran’s future, including: The NCRI’s Peace Plan, the Plan for the Autonomy of Iranian Kurdistan, the Declaration on the Relations of the Provisional Government with Religion and Denominations, and the Plan on Rights and Freedoms of Women.

In 1993, upon the NCRI President’s proposal, the National Council of Resistance of Iran adopted the ancient Persian Lion and Sun as the NCRI’s official emblem, and placed it on the tri-colored flag of Iran.
Also in 1993, the NCRI unanimously elected Maryam Rajavi as the NCRI’s elected-President for the transitional period after the mullahs’ overthrow.

In 2002, the NCRI adopted a plan to form the National Solidarity Front for the overthrow of Iran’s ruling religious tyranny. Within the framework of this front, the NCRI declared that it is prepared to cooperate with other political forces. The National Solidarity Front embraces all Iranians who totally reject the Velayat-e Faqih regime and all its internal factions, and seek to establish a democratic and independent republic based on separation of religion and state.

In 2005, the NCRI’s President-elect declared: “In the free Iran of tomorrow, we will be committed to and defend the abolition of the death penalty and elimination of all forms of cruel punishments. We once again reiterate our commitment to the Convention against Torture, international humanitarian laws, and the Convention to Eliminate All Forms of Discrimination Against Women.”

The NCRI acts as the Iranian people’s Parliament-in-Exile and legislative assembly. It has over 530 members, 52% of whom are women. The NCRI has 25 committees.

The National Council of Resistance of Iran embraces representatives of Iran’s diverse religious and ethnic combination including the Kurds, Baluchis, Arabs, Persians, Turks, Turkomans, Muslims, Armenians, Jews and Zoroastrians as well as atheists, and adherents to various persuasions and schools of thought.