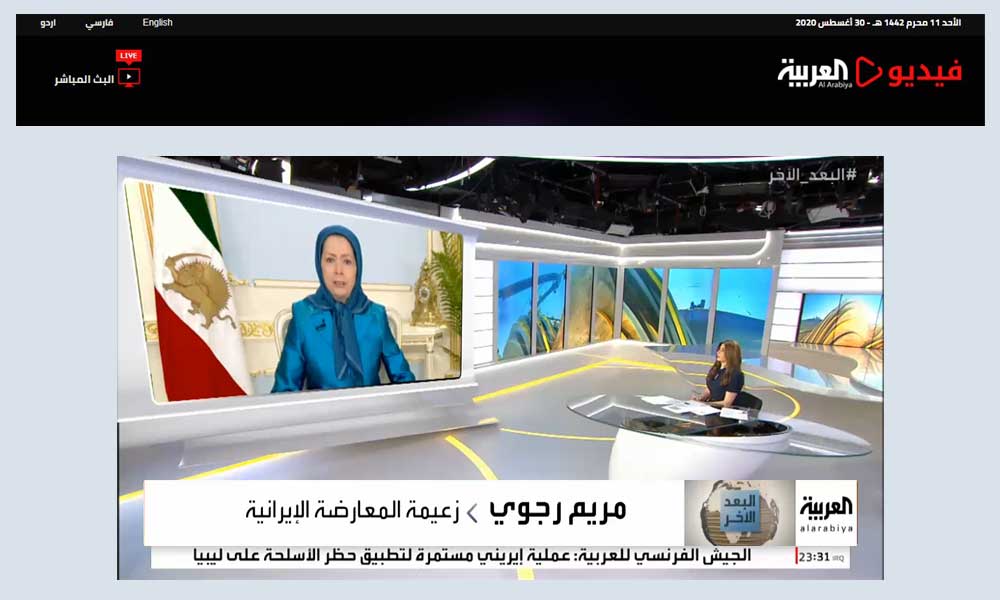 The Al Arabiyeh TV had an interview with Maryam Rajavi in its Al-Baad Al-Akher program on August 29, 2020.

The anchorwoman noted the clerical regime’s role in the assassination of dozens of Iranian opposition figures in European cities and capitals. She highlighted the regime’s greatest political scandal, namely the terrorist scheme to bomb the Iranian Resistance’s July 2018 grand gathering in Villepinte, Paris.

Al-Baad Al-Akher host: Over the past 30 years, the clerical regime has been involved in the assassination of dozens of opposition figures in European cities and capitals. The regime’s greatest political scandal took place two years ago when an Iranian diplomat working in the Iranian Embassy in Austria got involved in a major terrorist operation. He carried explosives in his diplomatic suitcase. He had conspired to blow up the Iranian opposition gathering.
The diplomat was Assadollah Assadi. His trial began last month in Belgium.
The leader of the Iranian opposition, Maryam Rajavi, has played a great role in exposing the regime’s violations of human rights and its terrorist crimes. She has fought the regime over the past 30 years and has sacrificed greatly. Many members of her family and her colleagues have been assassinated in this path by the Iranian regime.
In this program, we welcome our guest from Paris, Mrs. Maryam Rajavi.
Madam Maryam Rajavi we welcome you for taking part in our program.

Maryam Rajavi: Thank you. It is always a pleasure to have the opportunity to speak to my sisters and brothers in the Arab World.

AAH: In light of what I previously mentioned, allow me to begin with this question. The major operation which had been planned in Europe and was approved by the president and the supreme leader. When did it take place?

MR: First, I must say that the mullahs’ regime cannot continue to rule even for one day without killing and assassinating its opponents. Here, I have a book with me which contains a partial list of martyrs of the People’s Mojahedin of Iran (PMOI/MEK) and the Iranian Resistance.

120,000 have been executed so far for political reasons. This book in particular includes the names of only 20,000 of them. In the summer of 1988 alone, 30,000 people were executed on the basis of a fatwa by Khomeini himself. Look at this long list, which refers to political prisoners who were executed in the summer of 1988 on Khomeini’s order. A copy of the order is also published in this book. All the victims were executed in accordance with this fatwa by Khomeini.
The victims were among the best children of the Iranian people, from all classes. Khomeini’s fatwa, according to which his successor Khamenei also conducts himself, leaves no doubts about this crime against humanity. On the basis of this order, anyone considered to be committed to the PMOI/MEK must be executed. This is because the PMOI/MEK is the arch-nemesis and antithesis of the velayat-e faqih regime. Velayat-e faqih (absolute clerical rule) is in essence the Shiite version of Daesh (ISIS), which emerged in the Muslim world in recent times, 30 years after the establishment of the clerical regime in Iran. You know that the clerical regime has extended its suppression of opponents to outside Iran’s borders through terrorism. Many dissidents have been killed in Europe.
Last week, the US State Department denounced the role of 13 regime agents involved in the assassination of the National Council of Resistance of Iran’s (NCRI) representative in Geneva, Professor Kazem Rajavi. This is a picture of Prof. Kazem. He is the great martyr of human rights in Iran.
These agents committed this crime under the guise of “diplomats.” The NCRI’s representative in Italy, Mohammad Hossein Naqdi, was also assassinated by the regime’s diplomat-terrorists. This is a picture of Mr. Naqdi.
Zahra Rajabi, a member of the PMOI/MEK, was assassinated in Turkey. Additionally, many other dissidents were killed by the regime abroad.
You may know that the regime’s terrorist plot against our resistance in 2018 was foiled. The target was the Iranian Resistance’s gathering in Paris. I, along with some of the most high-profile US, European and Arab personalities were at the event, including former Algerian Prime Minister Sid Ahmad Ghozali, Mayor Rudy Giuliani, former Canadian Prime Minister Stephen Harper, as well as former ministers from France, Italy, Canada. Many other personalities were also present in this conference.
Currently, a regime diplomat is imprisoned for being directly involved in the bombing plot against a conference in Europe. This is the first time that a sitting Iranian diplomat has been arrested and imprisoned.
This individual personally took explosives to Europe on a passenger plane and hand-delivered it to two other terrorist agents.
We have information that the clerical regime had used terrorist threats in order to prevent this prosecution. The public court session is scheduled to take place on November 27.

MR: In my 7-hour testimony, I made it clear that this terrorist plot was explicitly planned at the regime’s Supreme National Security Council, chaired by Rouhani, and was subsequently approved and signed off by Khamenei. The plan was later implemented and for the first time, an official sitting diplomat of the regime entered the execution stage. The role of (the regime’s foreign minister, Mohammad Javad) Zarif was very significant in this decision. I said that not only the implementers of this plot but those who ordered it must also face trial.

AAH: Some say that European countries are being politically or legally naive about this issue in order to avoid pointing the finger at the regime itself. This is despite the fact that a regime’s diplomat had carried out this operation. This approach allows the Iranian regime to conduct other plots for the assassination of Iranian dissidents abroad, or even the assassinations of diplomats of other countries.

MR: Unfortunately, I have to say that this is true. Sadly, some European countries have for years sought trade deals with the regime and have turned a blind eye on the behavior of the Iranian regime. The policy of appeasement saves the individuals involved in terrorism, and one must stand against it.
The appeasement policy has emboldened the mullahs. The nature and essence of this regime does not allow it to reform. Therefore, the mullahs need suppression inside Iran and creating crises outside of Iran. Of course, today the reality has become clearer and the world is witnessing a shaky regime that has no future.

AAH: The present US government, the Trump administration, is imposing great pressure on the Iranian regime. It says it wants to change the regime’s behavior. Your position is that the regime will not change its behavior. Is the regime investing in the end of Trump’s term in office and his leaving the White House? If another president from the Democratic party takes office, will the new administration’s approach to the Iranian regime be fundamentally different?

Change in Iran will take place at the hands of the Iranian people, the Iranian Resistance and the PMOI/MEK

The UNSC resolutions must be re-imposed and the regime’s nuclear sites must be completely shuttered. This is what will guarantee the Iranian people’s interests and it is an imperative for peace and security in the entire region.

AAH: With respect to the Iranian nation, all of the opponents are in exile, and the regime suppresses any action within Iran. So, is there any hope for change inside Iran?

MR: It is true that there is suppression and maximum pressure by the regime, including many arrests, torture and executions. But the reality is that the Iranian people do not want this regime. The mullahs’ regime has reached the end of the line. The majority of the population is disenchanted with the regime and detest it.
During the November 2019 protests, the people were chanting “death to Khamenei,” and “Reformists, principalists, the game is now over.” This means that they are demanding that the regime must be overthrown in its entirety. They were also chanting, “death to the oppressor, be it the Shah or the Leader (Khamenei).” They reject both the Shah’s dictatorship as well as the current theocracy.
The regime was able to mercilessly massacre at least 1,500 people during the protests. But eventually the people of Iran will put an end to this regime.
I have a number of pictures here belonging to some of the martyrs of the November 2019 uprising. All of them were young people. And this map displays the places where protests took place last November.
It must be said that there is an extensive rebellious force inside Iran.
You know that financial corruption is now endemic in the regime. So, the mullahs do not have a way out of this crisis.

AAH: OK, let us pause on the issue of financial corruption. Mrs. Rajavi, speaking of financial corruption leads us to the difficult economic conditions of the Iranian people. We saw that the protests erupted in very difficult economic and living conditions. So, Iranian citizens are protesting for these reasons. Although the slogans focus on people’s livelihood but behind the slogans are political objectives.
In your view, why is the regime insisting to spend its money for further meddling in Arab countries through its proxies and operatives in the region? And this is despite the difficult economic conditions inside Iran and despite all the pressure that the US is bringing on the Iranian regime… Why is the regime insisting on meddling in Arab countries and expanding its influence in the region?

MR: This is a very good question. Iran is a rich country, with extensive natural resources, including oil and gas, among others. However, despite its riches, the people are in poverty and experiencing hunger. Why?

This is because since day one, the regime’s strategy to continue its survival has been to export terrorism and war, while meddling in regional countries. As long as this regime is in power it will spend its money for these purposes.
This is a regime that openly talks about its desire to establish a (Soviet-like) union of Islamic republics. The official mandate of the Qods Force, which is part of this regime, is to meddle in the internal affairs of other countries. The regime continued a bloody war with Iraq while chanting “liberating Qods via Karbala.” This is a regime that is responsible for the murder of over 500,000 people in Syria. And it is the main element in the Yemeni war which is preventing peace in that country. It is behind the attacks on ships (in the Gulf) and on Aramco oil facilities. The Iranian Resistance and the Iranian people seek brotherly relations with their neighboring countries. The regime’s meddling must be stopped. It is a strategic mistake to allow the regime to continue their meddling in other countries’ affairs. Interfering in the affairs of other countries forms part of the regime’s strategy for survival. The ultimate solution is the regime’s overthrow by the Iranian people and Resistance.

And undoubtedly, the Iran of tomorrow will be free of tyranny by the Shah or the Sheikh. It will be an Iran that seeks good relations with brother countries in the region. This regime needs to use Iran’s resources outside of its borders to continue its survival. Khamenei has repeatedly said that as long as the regime’s forces fight battles in Damascus and other countries in the region, the regime would not have to fight its battle in Tehran, Isfahan and other Iranian cities. The regime’s survival strategy, therefore, is to export terrorism abroad. This is unfortunately why the money that belongs to the Iranian people is being spent abroad. And, sadly, the rest of the money ends up in the mullahs’ bank accounts. The Iranian people’s share is poverty and economic crises.

AAH: Mrs. Rajavi, thank you a thousand times for participating in Al-Baad Al-Akher program. I thank you very much.