Message to Congressional Meeting on Anniversary of the 1979 Revolution 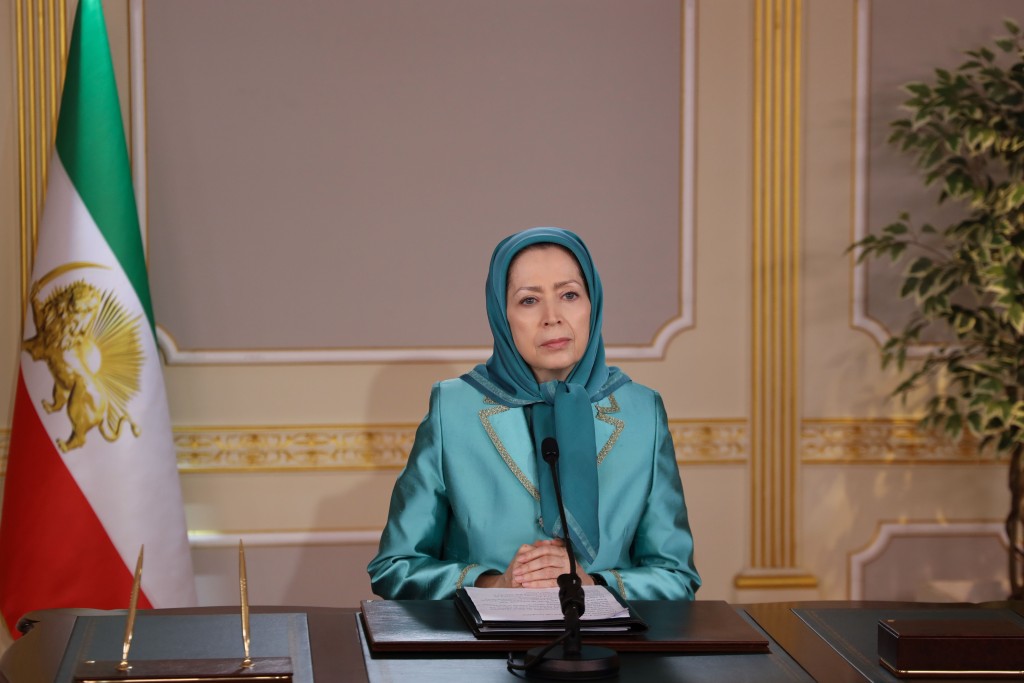 Maryam Rajavi: The correct and feasible policy is to recognize the right of the Iranian people and Resistance to overthrow the Iranian regime

Honorable members of the US congress
And our dear friends
Greetings to all of you.
This conference that is being held on the anniversary of 1979 revolution in Iran and in a situation where we are facing extra-ordinary circumstances in Iran, in policies, and in Iran-related developments in the Middle East and around the world.
43 years ago, today, the Shah dictatorship was overthrown by the Iranian people’s nationwide uprising. The Iranian people revolted against a violent tyranny.
They sought freedom and democracy.
But since the Shah had practically destroyed all democratic movements, he paved the way for a reactionary mullah to take power.

This mullah stole the revolution’s leadership by resorting to religious deception.
As a result, religious fascism replaced the Shah’s dictatorship.
The Shah was overthrown 13 months after the then-US president attended a state dinner in Iran on December 1977, in which he described Iran as an “island of stability.”
A few months later, millions of Iranians poured into the streets chanting “death to the Shah.”
A year later, the Shah was forced to leave the country. This was the huge gap in the US government assessments of Iran for two decades.
Despite this bitter and damaging experience, Western policies continue to suffer from a mistaken assessment; an assessment that is far from reality.
This is the gap between the illusion of a powerful regime and the reality of a theocracy on the verge of being overthrown.

But the clerical regime is not only conducting domestic suppression.
It fired missiles that brought down a Ukrainian passenger plane with its innocent passengers.
It targets neighboring countries with missiles and drones.
It has expanded its nuclear weapons program.
And it is constantly provoking war and terrorism in the region.
What is behind this aggressive behavior?
For years, the regime’s leaders have said that they need a nuclear weapon to prevent the regime’s overthrow.

They need the bomb to blackmail western governments as concessions from Western governments is vital for their survival.
Khamenei has repeatedly admitted that if the regime does not meddle in region, it would be forced to fight in the streets of Tehran.
So, it would be a catastrophic mistake to consider the regime’s warmongering as a sign of strength, which leads one to make concessions to it.
What is the reality?
The reality can be summarized in three points:
First, the Iranian people hate and are angry toward the regime.
Over the past four years, there have been eight major nationwide uprisings, including the November 2019 protests.

In 2021, there were three major protest movements as well as the nationwide protests by teachers and thousands of local acts of protest in all the country’s provinces.
These protests have continued into this year.
Second, the regime that has lost its entire base and only relies on suppression to survive.
Nothing says the regime is being overthrown more than the fact that Khamenei was forced to install as president Ebrahim Raisi, the henchman responsible in the massacre of 30,000 political prisoners in 1988.

He did this in a fearful attempt to prevent imminent protests and uprisings.
The third aspect of realities in Iran is the presence of an organized resistance.
This resistance movement has paid the price for freedom by offering 120,000 martyrs so far.
It can organize protests and uprisings in Iran, leading them toward the regime’s overthrow.
The Resistance Units, which are part of the MEK’s network in Iranian cities, carry out widespread anti-suppression activities daily.

They prepare the society for more uprisings.
Today, there is a democratic alternative that has powerful social base. It has elevated the widespread social discontent toward a goal-oriented struggle to overthrow the regime in its entirety.
It is no coincidence that the clerical regime has launched an extensive demonization campaign against this resistance.
It wants to implant the lie that there is no viable alternative to the regime.

In the lack of an objective understanding of the situation in Iran international policy toward Iran has suffered from very damaging mistakes in the past four decades.
This reality can be seen in the approach to the regime’s project to build nuclear weapons.
When 20 years ago, the Iranian Resistance unveiled the bomb-making project by exposing two major sites in Natanz and Arak, the regime was in a vulnerable position.
Instead of adopting a firm policy and imposing comprehensive sanctions, the world community wasted a decade in useless negotiations with the regime, providing it with the opportunity to advance its nuclear project.

And when the sanctions imposed by the US Congress and the UN Security Council Resolutions began to have an impact, unjustified concessions in the context of the 2015 nuclear deal eliminated the chance to dismantle the regime nuclear weapons program.
Now, that scenario is being repeated.
As I said on the day when the 2015 nuclear deal was signed, the only correct step to permanently stop Tehran from getting the bomb was the reimposition of the Security Council Resolutions, an end to enrichment, the dismantling of the nuclear sites and anytime, and anywhere inspections.
Every dollar of the Iranian people’s assets that is given to the regime will be spent on suppression at home, the export of terrorism and warmongering, or plundered by the regime leaders.
Obviously, the lifting of the sanctions will only lead to more conflict, carnage, and insecurity in the region.

The US Congress, which represents the conscience of American society, has adopted a realistic approach to the Iranian matter, as was reflected in House Resolution 118.
Congress supports the struggle of the Iranian people against two dictatorships and their desire to establish a democratically elected republic.
I would like to extend my gratitude to honorable members of the US Congress who are standing with the people of Iran.

We hope that Congress shapes US policy in a way that mistakes committed during the Shah’s regime are avoided and that US policy distances itself from approaches that appease the mullahs.
The correct policy is within reach.
This is a policy that recognizes the right of the Iranian people and the Iranian Resistance to overthrow the religious fascism ruling Iran.
Thank you all very much.