Fearing a more significant defeat the clerical regime withdrew its appeal against Assadi’s conviction, his 20-year imprisonment is now final 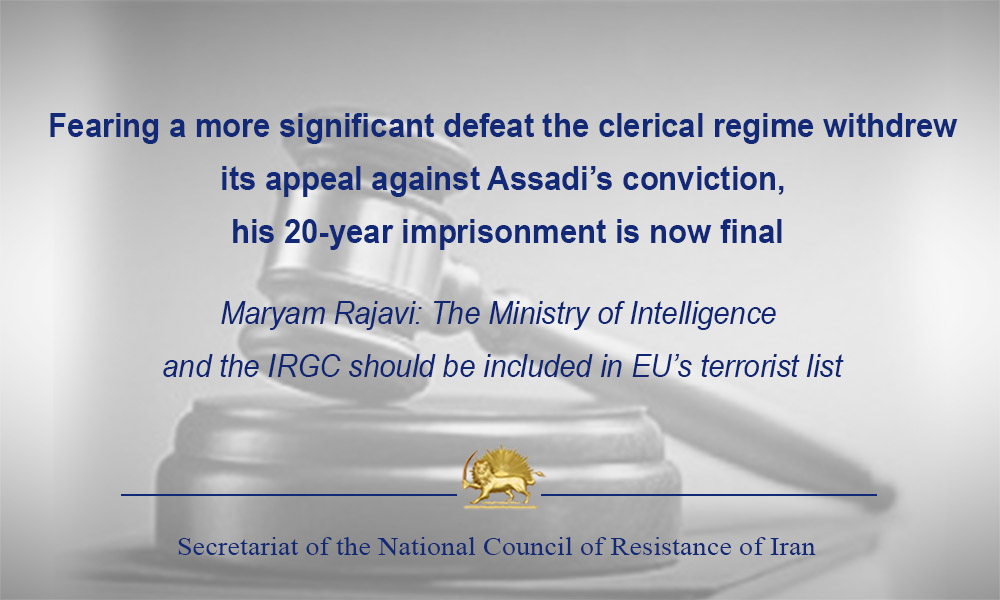 Mrs. Maryam Rajavi: The Ministry of Intelligence and the IRGC should be included in EU’s terrorist list

• The information about the regime’s terrorist and intelligence network, the names, and particulars of hundreds of its agents used against the Iranian Resistance must be made available to the public.

• Holding accountable and expelling intelligence agents, mercenaries and Revolutionary Guards from Europe, revoking their refugee status and citizenship, as well as the closing down the regime’s official and unofficial embassies and centers are imperative to countering terrorism and subsequent crimes and safeguarding Europe’s security.

• Warning against any deals with the clerical regime, Mrs. Rajavi said: The regime’s leaders, who have been responsible for the export of terrorism for the past four decades, must be brought to justice. As I said in my 7-hour testimony in 2020, the decision to bomb Villepinte was taken by the regime’s Supreme National Security Council with the participation of Zarif, and headed by Rouhani, and approved by Khamenei.

• Rouhani’s confession (April 28, 2021 ): When we want to carry out an offensive operation somewhere, we must discuss it in the Supreme National Security Council, which is attended by the heads of the three branches and the decision must be approved by Khamenei.

• Zarif Confession (February 24, 2021): Our ambassadors have a security structure. The Foreign Ministry’s agenda has been a political-security agenda since the beginning of the revolution.

This morning, the preliminary hearing was held in the Antwerp Court of Appeal in Belgium to hear the appeal of the perpetrators of the bombing plot at the Iranian Resistance’s Free Iran grand gathering in June 2018 in Paris. Fearing a bigger defeat, through its lawyers, the clerical regime withdrew the appeal against the conviction of its diplomat-terrorist, Assadollah Assadi. In doing so, it accepted the Antwerp court’s February 4, 2021decision when Assadi was sentenced to 20 years in prison. The appeal process for the other three mercenaries (Nasimeh Naami, Amir Saadouni, and Mehrdad Arefani) continues.

Mrs. Maryam Rajavi, the President-elect of the National Council of Resistance of Iran (NCRI), said that with the sentence becoming final, it is even more important for the European Union to blacklist the clerical regime’s Ministry of Intelligence and the Revolutionary Guards. The regime agents and mercenaries must be prosecuted and expelled, their refugee status and citizenship revoked. The regime’s embassies and official and unofficial centers must be closed. This is imperative to counter terrorism and subsequent crimes and to safeguard the security of European countries. The regime’s so-called cultural and religious, which are in reality the centers of coordination of terrorism and espionage, must be closed.

Mrs. Rajavi added: “The terrorist conspiracy at the Villepinte, France, and the Antwerp court’s verdict showed that we are facing a case of state-organized terrorism emboldened by four decades of appeasement vis-a-vis the clerical regime.” She warned against the regime’s blackmail, extortion, hostage-taking, and other measures to secure a deal, saying that ending appeasement, adopting a decisive policy against the regime by the European Union, and holding to account its leaders is essential to counter this regime’s export of terrorism. The regime leaders, all who have been implicated in its terrorist crimes over the past four decades, must face justice and be prosecuted.

Mrs. Rajavi pointed out, as I emphasized during my seven-hour testimony, the Supreme National Security Council (SNSC), presided over by Hassan Rouhani, with Javad Zarif’s presence, made the decision to bomb the Iranian Resistance’s gathering at the Villepinte, and the regime’s Supreme Leader Ali Khamenei approved it. Khamenei, Rouhani, Javad Zarif, and the mullahs’ Intelligence Minister Mahmoud Alavi must face justice for decades of terrorism and crimes against humanity.

The regime’s president, Rouhani, acknowledged on April 28, 2021: “Whether when we want to [launch] a defensive operation and whether when we have to carry out an offensive operation somewhere … They will definitely be discussed in the SNSC. The SNSC was set up to allow the heads of the three branches to be present and the military and the government branches to come together. Military commanders and political officials are there. We discuss, and finally, the Supreme Leader must approve our decision.”

In a February 24, 2021 interview, segments of which were leaked on April 25, 2021, Zarif admitted, “Most of our ambassadors and the Foreign Ministry have a security structure. Our Ministry of Foreign Affairs has been facing security issues since it began operating. The Ministry’s agenda has been a political-security agenda since the beginning of the revolution.”

Rouhani and Zarif’s remarks leave no doubt that the regime’s diplomatic apparatus and negotiators are nothing, but the offspring of the Revolutionary Guards and the regime’s security services.

Secretariat of the National Council of Resistance of Iran (NCRI)
May 5, 2021