Maryam Rajavi: The long overdue disbanding and designating the IRGC is the Iranian people’s urgent demand, indispensable to regional peace and a prerequisite in the fight against terrorism 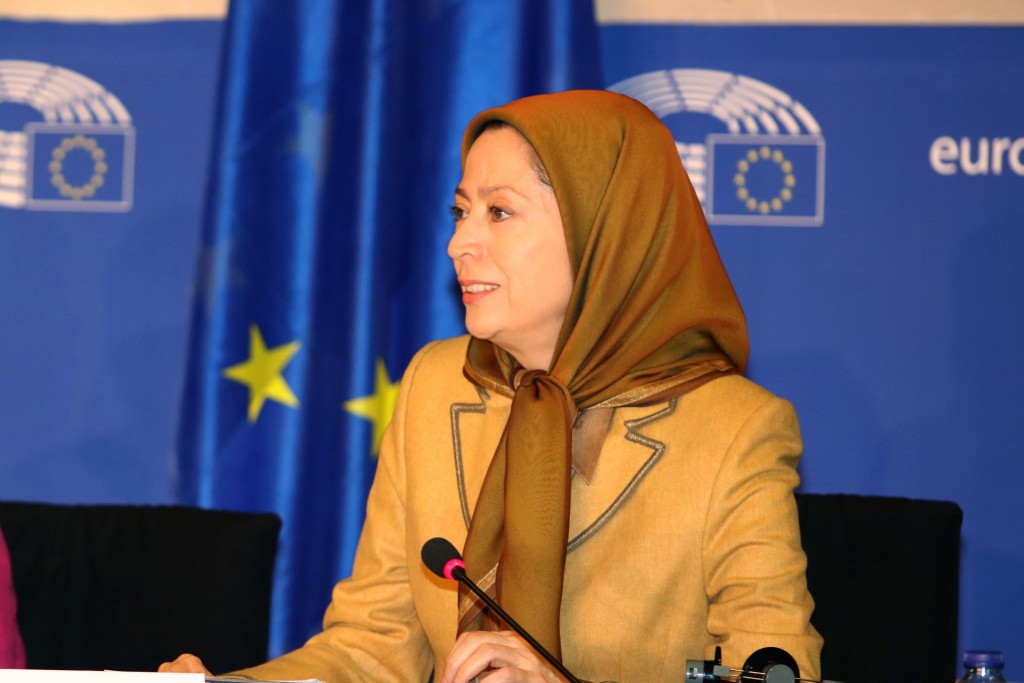 The Iranian Resistance has called for it four decades ago

The European Union must comply with the call of the majority of representatives of the 450 million people of Europe, put an end to the policy of appeasement by immediately designating the IRGC and sanctioning Khamenei, Raisi, and those responsible for the killings

Mrs. Maryam Rajavi, the President-elect of the National Council of Resistance of Iran (NCRI), welcomed the resolution adopted by the European Parliament which called on the European Union to place the IRGC, Basij and the Quds Force on the terrorist list, to ban any economic activity with these entities and sanction the regime’s Supreme Leader Ali Khamenei, its President Ebrahim Raisi and foundations related to the IRGC, including the Mustazafin, Shahid, and Janbazan foundations.

Mrs. Rajavi said this is indispensable to confronting the biggest terrorist and suppressive organization and state in the world today, which have shed the blood of millions of people in Iran and the region in the last four decades.

She stressed that the long overdue designating, sanctioning and disbanding the IRGC, the suppressive, terrorist, and war-mongering apparatus of the clerical regime, are the urgent demands of the Iranian people, a necessary condition for regional peace and a prerequisite in the fight against terrorism. The Iranian Resistance has been repeatedly calling for the IRGC’s terrorist designation in the past four decades.

Mrs. Rajavi expressed her hope that the European Union and its member states would immediately put an end to the policy of appeasing the religious fascism ruling Iran by placing the IRGC on the terrorist list and sanctioning Ali Khamenei, Ebrahim Raisi, and other officials responsible for the killings and suppression and heed the demand of the Iranian people and the call by the vast majority of the representatives of 450 million people in Europe.

Article 4 of the immediate tasks of the provisional government adopted by the NCRI in 1981, emphasizes on the disarming and dissolution of all reactionary entities in charge of repression, espionage, inquisition, and censorship, including the revolutionary courts, the prosecutor offices, the IRGC, and the Basij.

Article 2 of Mrs. Maryam Rajavi’s Ten-Point Plan for the Future of Iran underscores “The dissolution and disbanding of the Islamic Revolutionary Guard Corps (IRGC), the terrorist Qods Force, plainclothes groups, the unpopular Basij, the Ministry of Intelligence, Council of the Cultural Revolution, and all suppressive patrols and institutions in cities, villages, schools, universities, offices, and factories”.

Mrs. Rajavi has repeatedly, including on February 22, 2010, asked the Council of the European Union to include the IRGC and all its affiliated companies and institutions, which control a large part of Iran’s economy, on the terrorist list and sanction them.

Some of the articles of the resolution are as below:

Article 10. Calls on the VP/HR and the Council to expand the EU sanctions list to all individuals and entities responsible for human rights violations and their family members, including Supreme Leader Ali Khamenei, President Ebrahim Raisi, and Prosecutor General Mohammad Jafar Montazeri, as well as all foundations (‘bonyads’) linked to the IRGC, notably the Bonyad Mostazafan and the Bonyad Shahid va Omur-e Janbazan; calls also on the VP/HR, the Council and the Member States to consider sanctions against the 227 Members of the Iranian parliament who encouraged the use of death sentences; welcomes the ongoing preparation in the United Kingdom for the inclusion of the IRGC on the UK list of terrorist organisations; vigorously condemns the sanctions imposed by the Iranian authorities against German and French former politicians as well as against Members of the European Parliament; recalls that as long as European parliamentarians are sanctioned by the authorities, the inter-parliamentary dialogue should remain suspended;

Article 11. Calls on the Council and the Member States to add the IRGC and its subsidiary forces, including the paramilitary Basij militia and the Quds Force, to the EU terrorist list, and to ban any economic and financial activity involving businesses and commercial activities related to, owned, wholly or in part, by, or fronting for, the IRGC or IRGCaffiliated individuals, regardless of their country of operation, while avoiding any adverse consequences for the people of Iran as well as for EU humanitarian and development aid; calls for the EU and its Member States, in cooperation with likeminded partners, to urge any country in which the IRGC deploys military, economic, or informational operations to sever and outlaw ties with the IRGC; strongly condemns the IRGC’s unprovoked attack in the Erbil Governorate of Iraqi Kurdistan and stresses that such indiscriminate attacks threaten innocent civilians and the region’s stability;

Article 17. Condemns in the strongest terms the systematic use of torture, including sexual violence as a weapon, in Iranian prisons and calls for the immediate cessation of all forms of torture and ill-treatment of all detainees; strongly condemns the Islamic Republic’s policy of forcing confessions using torture, intimidation, threats against family members or other forms of duress, and the use of these forced confessions to convict and sentence protesters; further condemns the practice of denying detainees access to phone calls and family visits; expresses grave concerns about detainees’ inability to access legal representation during interrogations; calls on the Iranian regime to treat prisoners with the respect due to their inherent dignity and value as human beings; reiterates its call on Iran to ratify without delay the UN Convention against Torture and Other Cruel, Inhuman or Degrading Treatment or Punishment, and to act in full accordance with the provisions contained therein;

Article 20. Strongly condemns the Islamic Republic’s continued practice of shutting down internet and mobile networks in the context of protests in the country, which prevents communication and the free flow of information for Iranian citizens; underscores that such actions are a clear violation of international law; welcomes the various EU restrictive measures enacted under the sanctions mechanism in response to the repression, notably those targeting individuals and entities active in the area of information and communications technology and those responsible for disinformation; further welcomes the addition of the Iranian minister of information and communications technology to the EU sanctions list; calls on the Commission to consider, in compliance with the principle of necessity, allowing EU-based communications providers to offer safe tools to the citizens and residents of Iran;

Article 21. Calls on the Member States to commit to enabling Iranians to access a free internet in spite of the regime’s massive internet censorship; suggests that the necessary technical and financial resources could be provided through an EU fund;

Article 22. Urges all Member States to exercise universal jurisdiction over all Iranian officials reasonably suspected of criminal responsibility for crimes under international law and other grave violations of human rights; urges those Member States whose domestic legislation does not yet provide for the enactment of the principle of universal jurisdiction to introduce such legislation without delay;

25. Expresses deep concern over the structural transnational repression carried out by the authorities of the Islamic Republic, which includes espionage, assassinations, attempted bomb attacks, cyberattacks, disinformation campaigns, and other control efforts, in particular by its embassies and the IRGC, against the Iranian diaspora living in the EU, which stifles the freedom of speech and of expression of EU citizens and residents, endangers their safety, and amounts to malign interference; calls on the EU and the Member States to expand protections for the Iranian diaspora against the Islamic Republic’s transnational repression; calls on the EEAS and the Member States to find avenues for providing technical and capacity support to those helping Iranian civil society while ensuring Iranian ownership of these activities;

Secretariat of the National Council of Resistance of Iran (NCRI)
January 19, 2023