Extremism under the banner of Islam is a fatal epidemic 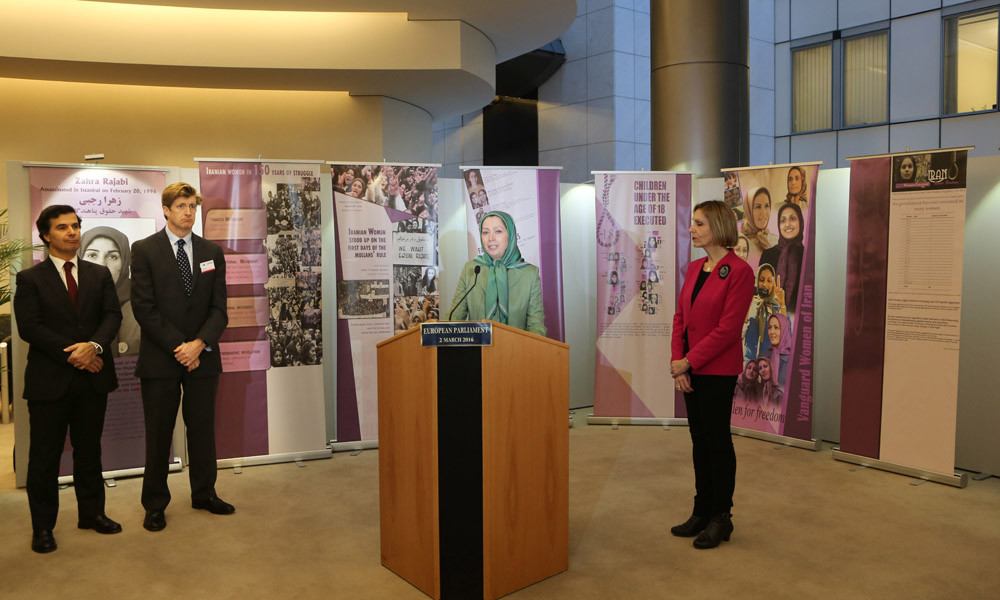 On March 2, 2016 at a meeting in European Parliament in Brussel, chaired by Ms. Beatriz Becerra, the European MP from Spain, Maryam Rajavi talked about “women’s role in War against Fundamentalism” and said :

Chair of the conference,
Dear sisters,
I am so pleased to be here andspeak to you on such a key topic as “women’s role in War against Fundamentalism.”
Extremism under the banner of Islam is a fatal epidemicexpanding throughout the world because it has not been confronted.
To defeat this epidemic, a comprehensive approach is vital.
Since the 1990s we have been warning that Islamic fundamentalism is the new global threat.

Today, there is a real concern about Daesh, but it should be noted that its expansion is a product of two developments in the region:
1. The Iranian regime’s occupation of Iraq after the war in 2003 and the brutal crackdown on Sunnis by the mullahs’ puppet government in Iraq.
2. Suppression of Syrian people and dissidents by Bashar Assad’s government,backed and led by the mullahs’ regime.
3. Therefore, if it was not for the Iranian regime’s domination over Iraq and Syria,if the Sunnis were not suppressed in Iraq,if Bashar Assad’s dictatorship did not exist, Daesh would not have emerged as a threat.

With the inception of the mullahs’ rule in 1979, a concrete, practical model was createdfor all fundamentalist groups.
The history of the past 37 years proves that no other factorhas been as effective asa ruling government acting as a role-model for the expansion of fundamentalist groups.
Particularly that the mullahs actively try to createthese groups and guide them ideologically.
They also finance and provide arms for these groups.
The Hezbollah of Lebanon was made and backed by the mullahs.
The Ansarallahof Yemen is supported by the mullahs.
Several other militia groups in Iraq are affiliated with the Quds Force.
The African fundamentalists receive their arms from Iran.
Unfortunately, Western governments’ silence and appeasement of the Iranian regime have emboldened other fundamentalist groups to follow in the mullahs’ footsteps.
The next question is about the ideology of fundamentalists.
Sunni and Shiite fundamentalists share common foundations despite differences.
They act as representatives of Islam and enforce their reactionary Sharia laws on people.
While Islam is against compulsion.

Misogyny is at the core of their thinking.
They resort to terrorism, massacre of prisoners and mass killings of defenseless peoplewhile the teachings of Islam is strongly against such conducts.
The mullahs, DaeshandBoko Haram are similar in the foundation of their convictions.
Their beliefs and conducts are similarand share the same pillars which is the establishment of a tyrannical regime or Islamic Caliphate orVelayat-e Faqih.
All fundamentalist groups share the following:
-imposing religion by force through Sharia laws,
– export of terrorism,
-hegemonic ambitions beyond their borders,
-enmity to the West, and misogyny.
The question is: how could this danger be confronted?
What is the right approach?
A decisive and all out struggle, which is the experience of the Iranian people and Resistance, is the right approach.
So, I would like to briefly review the experience of the Iranian people’s Resistance.
First of all, military force is not enough in confronting fundamentalism, rather you need a cultural alternative.
In Iran, the formation of an organized movement against the regime and offering an intellectual and cultural alternative ultimately led to the social and ideological defeat of fundamentalism.
Second, women have a central role in this battle.
Women’s equal status with men as well as their equal and active participation in political leadership is an essential condition.

This movement led by women will ultimately overcome Islamic extremism and fundamentalism.
Third, the success of this battle also depends on men’s emancipation from male dominated culture.
Better understanding and voluntary acceptance of the need for women’s participation in political leadership is the most serious blow to the ideology of male dominance.

Fourth, there is an effective anti-thesis to extremism under the banner of Islam.
It is a tolerant and democratic interpretation of Islam which brings fundamentalism to adeadlock. Supporting this alternative is an essential element of this struggle.A movement that believes in separation of religion and state, gender equality and freedom and democracy for all the people.
Fifth, the epicenter of fundamentalism which inspires misogyny is the regime ruling Iran.
To confront Daesh and uproot extremism under the banner of Islam, the Iranian mullahs’ occupation in Syria, Iraq and other places must be terminated.

We call on Western governments, especially Europe, to avoid dealing with IRGC companies and refrain from giving concessions to the mullahs.
This would directly provide fuel to the machinery of genocide in Syria and continued executions in Iran.
Stop turning a blind eye on oppression of women and violations of human rights in Iran.
We call on the world community to, instead, respect the Iranian people’s struggle for freedom and democracy.

I thank you all very much, indeed.