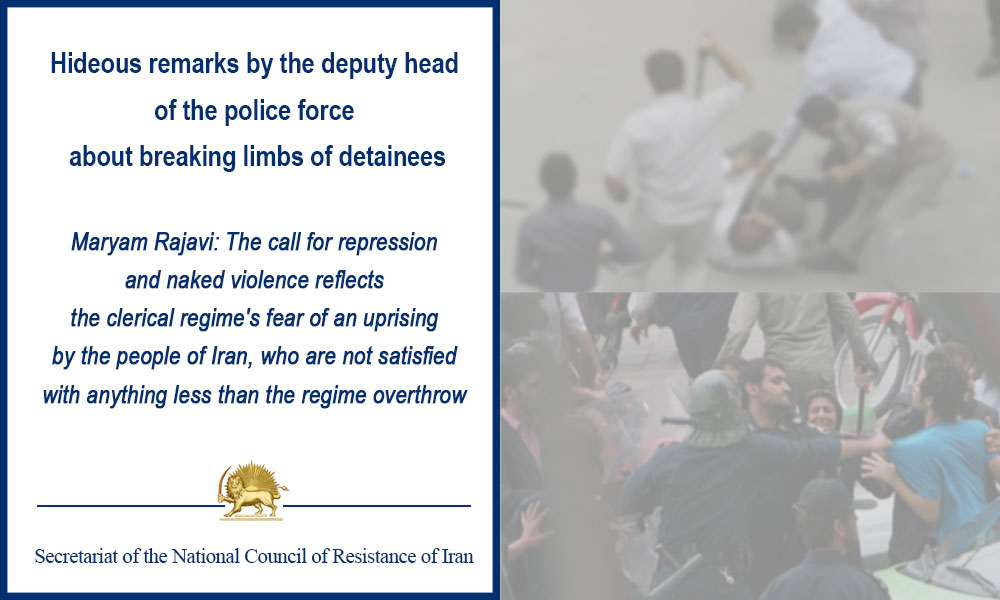 Mrs. Maryam Rajavi: The call for repression and naked violence reflects the clerical regime’s fear of an uprising by the people of Iran, who are not satisfied with anything less than the regime overthrow

• Silence and inaction vis-à-vis the mullahs whose constitution and practice violate the Universal Declaration of Human Rights, international laws and conventions, emboldens them to continue executions, torture, and crimes against humanity

On Thursday, December 31, 2020, the State Security Force deputy commander Brig. Gen. Qassem Rezaei issued the following order to his subordinates: “If you arrest those who ‘wield machetes’ you must do something to drop (the machete) on the ground. That is, he no longer should have an arm to (hold the machete) … If you catch them on the scene and I see that he is standing unharmed, you should answer why he is still unharmed. If he was wielding a machete on the scene, then, I must see him with a broken arm. I must see that he has fallen on the ground. If he held a machete in his hand and caused terror, you should have broken his leg on the scene so that I could have seen it.”

While humiliating and insulting a detainee held as a “thug” with his eyes blindfolded, he responded to a question as to whether the detainee enjoyed any right, saying: “That he is still alive is what the law stipulates; he must stay alive …. The law says that if someone is screaming and causing fear and horror, this is an act of terror and he is waging war on God”, reported IRNA, December 31, 2020.

Mrs. Maryam Rajavi, the President-elect of the National Council of Resistance of Iran (NCRI), described the call for repressive measures and naked violence against citizens on the bogus charge of being thugs and bandits, as a reflection of the state of the regime being engulfed by crises and fearing an uprising by enraged people and youths, who will not be satisfied with anything less than the regime’s overthrow. She called on the United Nations and the European Union and its member states to impose international sanctions on the clerical regime for its systematic human rights abuses, adding that silence and inaction vis-à-vis a regime that officially and openly, in law and in practice, egregiously violates the Universal Declaration of Human Rights, international laws and conventions, only emboldens it to continue with executions, torture, and crimes against humanity.

Secretariat of the National Council of Resistance of Iran (NCRI)
January 3, 2021