Iran: Coronavirus casualties in 160 cities are at least 3650 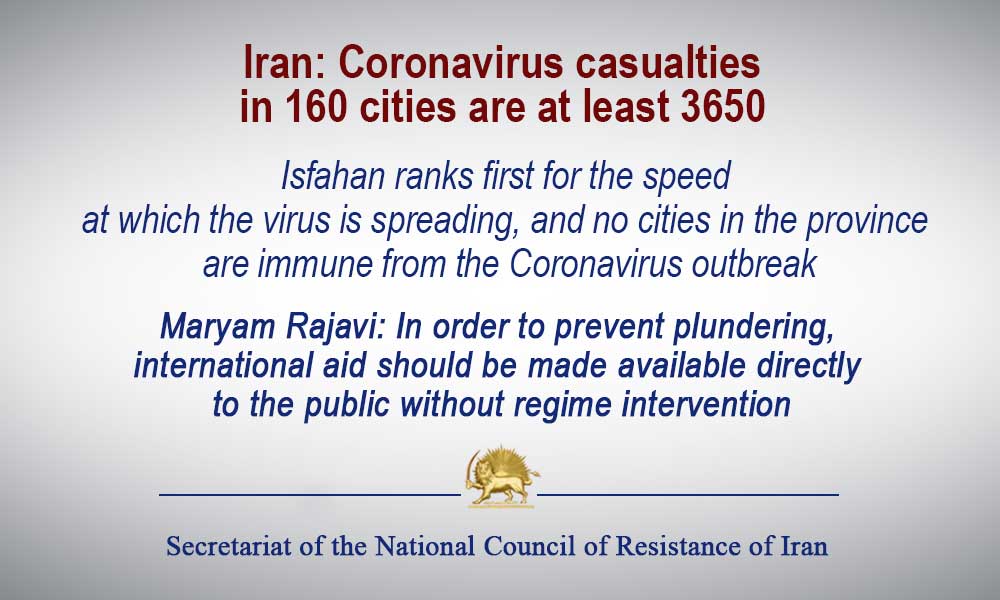 Mrs. Rajavi: In order to prevent plundering, international aid should be made available directly to the public without regime intervention

The People’s Mojahedin Organization of Iran (PMOI/MEK) announced this afternoon, Thursday, March 22, that the number of Coronavirus fatalities in 160 cities is at least 3650. According to eyewitness reports, hundreds more have lost their lives to the Coronavirus in the past 24 hours, and the number of victims in various provinces are: 230 in Alborz, 300 in Mazandaran, 296 in Golestan, 348 in Khorasan Razavi, 91 in Markazi, 102 in Lorestan, 58 in East Azerbaijan, 21 in Ardabil, 15 in West Azerbaijan, 12 in Kerman, 10 in Hormozgan, 15 in Semnan, 10 in North Khorasan, and seven in Chaharmahal and Bakhtiari.

The governor of Khaf, a city in Khorasan Razavi, has ordered the mayor to dig dozens of graves at a depth of four meters to bury the Coronavirus victims collectively.

Dr. Khaloo, head of the Intensive Care Unit at Ali Asghar Hospital in Shiraz, called for the city to be half-lit and for flags to be flown at half-mast to mourn the victims. Addressing the governor, he said, “Many officials do not know what we are in for. Please put aside politics … publishing the statistics is not bad at all, what’s bad is the deaths of our people due to this disease.”

The state-run Entekhab daily, quoting Isfahan University of Medical Sciences vice president, Behrouz Kalidari, wrote: “Isfahan is ranked first in terms of the speed of the outbreak. … Kashan has a complex situation. The number of fatalities in this city of nearly 450,000 equates with the number in a city with a population of four-and-a-half million. As such, there is a possibility of insufficient medical staff in that city. In Isfahan province, the number of critically ill patients who need ICU care at the hospital is increasing with new admissions. None of Isfahan province’s cities are immune to the outbreak of Coronavirus.”

Challenging the regime’s President Hassan Rouhani, the notorious head of the regime’s judiciary Ebrahim Raisi reminded him today that based on Ali Khamenei’s accord, a ‘committee to combat Coronavirus’ must be convened at the highest official level of the country, in the office of the president, … “therefore, my request is that, instead of once a week, the president (Rouhani) would convene the meetings once a day if necessary.” Hassan Rouhani rejecting Khamenei’s accord to undertake responsibility for the committee, had proposed to convene the meeting once a week only.

The state daily Vatan, associated with the regime’s Supreme Leader Khamenei, also wrote: “Corona will be gone sooner or later, but the memory and effects of Hassan Rouhani’s weak government will not be forgotten”.

At the same time, Iran’s religious fascism demanded a $5 billion loan from the International Monetary Fund under the pretext of countering the Coronavirus.

Mrs. Maryam Rajavi, the President-elect of the National Council of Resistance of Iran (NCRI), reiterated that the international aid should be directly provided to hospitals and the public without the intervention of the mullahs’ predatory regime. The mullahs’ vicious dictatorship lacks the competence and ability to confront the Coronavirus. The medical facilities and resources are primarily at the service of the Revolutionary Guards and the government officials. Any money that is given to this regime will be plundered and nothing will be done for the people.

Secretariat of the National Council of Resistance of Iran (NCRI)
March 12, 2020