Maryam Rajavi hailed protests by plundered residents in Tehran and elsewhere, called for support for protesters demanding their rights 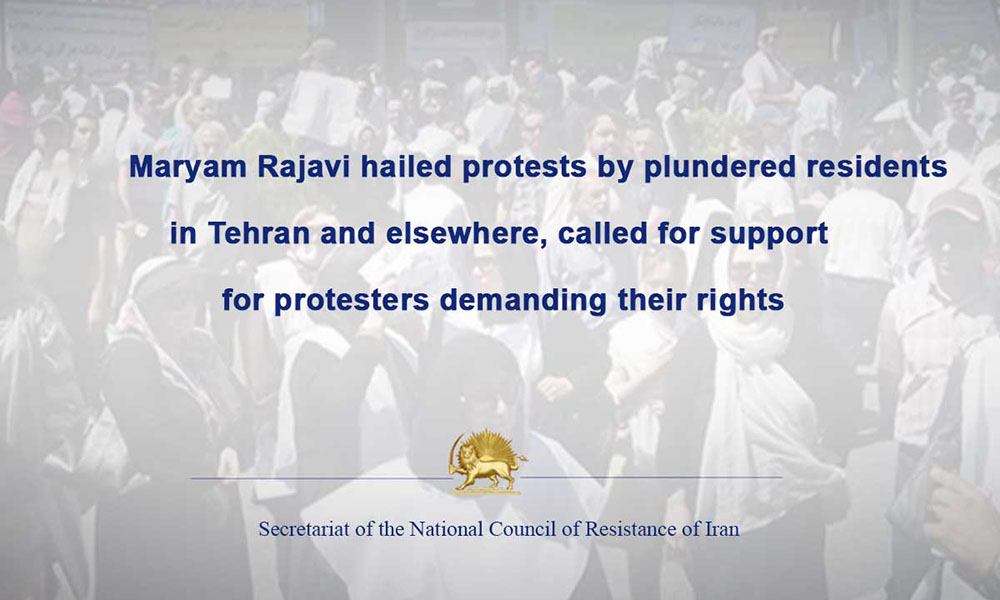 She welcomed the protests by Iranians whose savings have been plundered by institutions affiliated with the mullahs’ Supreme Leader Ali Khamenei, and the Revolutionary Guard Corps (IRGC) with the complicity of government agencies under Rouhani and previous presidents.

She said, “The courageous chants in today’s demonstrations targeting the heads of the Judiciary and Executive Branch, as well as the suppressive State Security Force and intelligence forces, reflect the Iranian people’s desire for the overthrow of the mullahs’ religious dictatorship.”

Noting the chant “theft has become institutionalized under this regime,” Maryam Rajavi added, “Institutionalized fraud along with institutionalized murder and belligerence constitute the pillars of the mullahs’ decadent regime. Ali Khamenei and his office hold the strings controlling all the depraved crimes taking place in the country. As long as this regime is in power, there will be no end to the astronomical embezzlement, poverty, unemployment and catastrophic economic conditions.”

Khamenei has attained enormous wealth by plundering the people of Iran, devastated by poverty to the extent that they sell their children or organs, and by suppressing Iran’s youth who demand freedom. He has amassed this wealth in giant financial conglomerates such as the Staff Implementing Khomeini’s Order, the Qods Razavi Foundation, the IRGC and Bassij cooperatives, and the Mostaz’afan Foundation. He has delegated the administration of these institutes to officials who were in charge of the massacre of political prisoners in 1988, as well as other ruthless officials.

Maryam Rajavi called on all Iranians, especially the youth, to support their plundered and deprived countrymen and women protesting in demand of their rights, and to help them expand their protests.

Secretariat of the National Council of Resistance of Iran
October 23, 2017