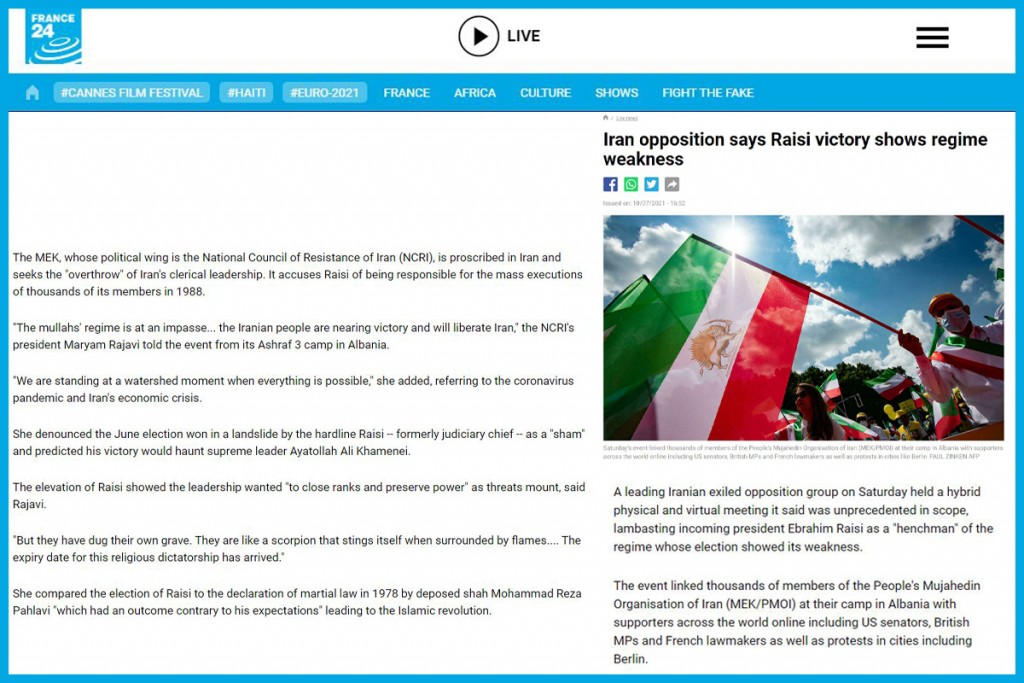 A leading Iranian exiled opposition group on Saturday held a hybrid physical and virtual meeting it said was unprecedented in scope, lambasting incoming president Ebrahim Raisi as a “henchman” of the regime whose election showed its weakness.

The event linked thousands of members of the People’s Mujahedin Organisation of Iran (MEK/PMOI) at their camp in Albania with supporters across the world online including US senators, British MPs and French lawmakers as well as protests in cities including Berlin.
The MEK, whose political wing is the National Council of Resistance of Iran (NCRI), is proscribed in Iran and seeks the “overthrow” of Iran’s clerical leadership. It accuses Raisi of being responsible for the mass executions of thousands of its members in 1988.

“The mullahs’ regime is at an impasse… the Iranian people are nearing victory and will liberate Iran,” the NCRI’s president Maryam Rajavi told the event from its Ashraf 3 camp in Albania.
“We are standing at a watershed moment when everything is possible,” she added, referring to the coronavirus pandemic and Iran’s economic crisis.
She denounced the June election won in a landslide by the hardline Raisi — formerly judiciary chief — as a “sham” and predicted his victory would haunt supreme leader Ayatollah Ali Khamenei.
The elevation of Raisi showed the leadership wanted “to close ranks and preserve power” as threats mount, said Rajavi.

“But they have dug their own grave. They are like a scorpion that stings itself when surrounded by flames…. The expiry date for this religious dictatorship has arrived.”
She compared the election of Raisi to the declaration of martial law in 1978 by deposed shah Mohammad Reza Pahlavi “which had an outcome contrary to his expectations” leading to the Islamic revolution.
– ‘Squad of cannibals’ –
Raisi, who takes office in early August, is accused by the NCRI and international rights groups of playing a key part in the executions of thousands of opposition prisoners — mostly suspected members of the MEK.
He is accused of being part of a four-man “Death Committee” that sent convicts to their death without a shred of due process.
Most rights groups and historians say between 4,000 and 5,000 were killed, but the NCRI puts the figure at closer to 30,000.

Last year, seven special UN rapporteurs told the Iranian government that “the situation may amount to crimes against humanity” and urged an international probe if Tehran did not show full accountability.
Rajavi described Raisi, Khamenei and new judiciary chief Gholamhossein Mohseni-Ejei as as a “squad of cannibals” who should face charges of crimes against humanity.
She added Raisi should never be allowed to address the UN in New York due to the events in 1988.
“Let us plant flowers in this wounded motherland again,” Rajavi added.
The MEK backed Ayatollah Ruhollah Khomeini in the 1979 revolution that ousted the shah but rapidly fell out with the new Islamic authorities and embarked on a campaign to overthrow the regime.
The MEK then sided with Iraq under Saddam Hussein in the 1980-1988 Iran-Iraq war.
Its fighters based in Iraq had by 2016 relocated elsewhere in an accord with the US and UN, notably to Albania where they are based at Camp Ashraf.

As Rajavi spoke, those present chanted the name of her husband Massoud who was long the leader of the group and has not been seen for decades. The group has never confirmed his death.