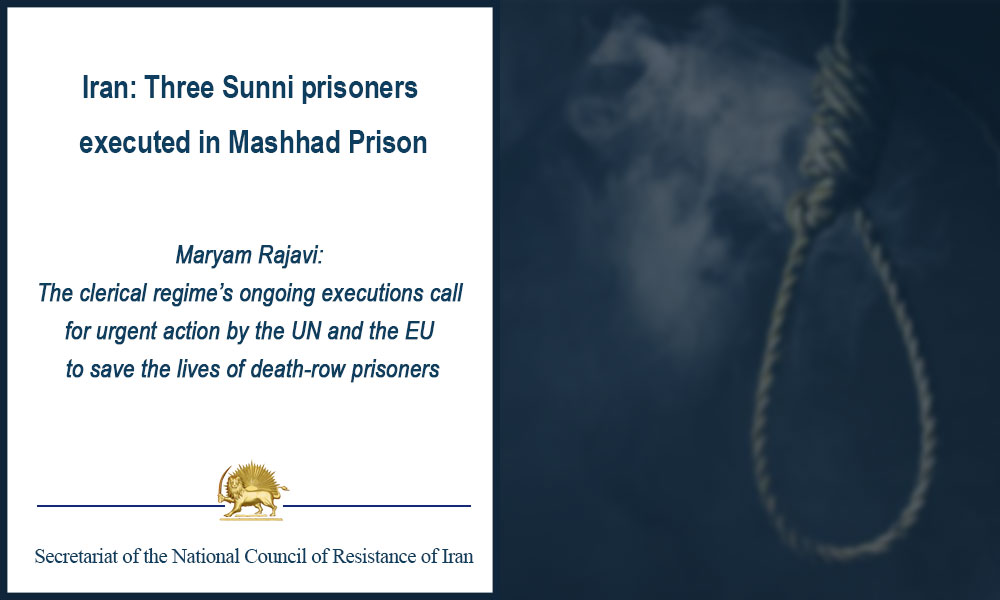 Maryam Rajavi: The clerical regime’s ongoing executions call for urgent action by the UN and the EU to save the lives of death-row prisoners

On Thursday, December 31, 2020, the mullahs’ regime hanged three Sunni prisoners, Hamid Rastbala, Kabir Sa’adat Jahani, and Mohammad Ali Arayesh, on the charge of being “outlaws” in Vakil-Abab Prison in Mashhad, northeast Iran. They had endured five-and-a-half years of imprisonment and torture.

These prisoners were abruptly taken to solitary confinement on Wednesday and hanged the next day without notifying their families. They had been arrested by Mashhad’s intelligence department and transferred to Vakil-Abad Prison after months of torture and harassment.

The same day, Mohammad Hassan Rezaiee, 16 at the time of his arrest, was hanged after spending 13 years in prison. His execution in the city of Rasht, northern Iran, despite protests by human rights organizations and organs, was a blatant violation of the International Covenant on Civil and Political Rights and the Convention on the Rights of the Child.

The religious fascism ruling Iran is engulfed in domestic and external crises and fearful of public protests’ eruption. More than any other time, it finds itself in need of stepping up repression and spreading the atmosphere of terror and intimidation among the public.

Mrs. Maryam Rajavi, the President-elect of the National Council of Resistance of Iran (NCRI), strongly condemned the ongoing executions, especially of Sunnis and minors, and called on the United Nations, international human rights organizations, and the European Union to act to save the lives of death row prisoners. She again underscored the need for an international delegation to visit Iranian prisons and prisoners, as well as for the referral of the file on the systemic violation of human rights in Iran to the UN Security Council so that the leaders of the regime could face justice for four decades of crimes against humanity.

Secretariat of the National Council of Resistance of Iran (NCRI)
January 2, 2021