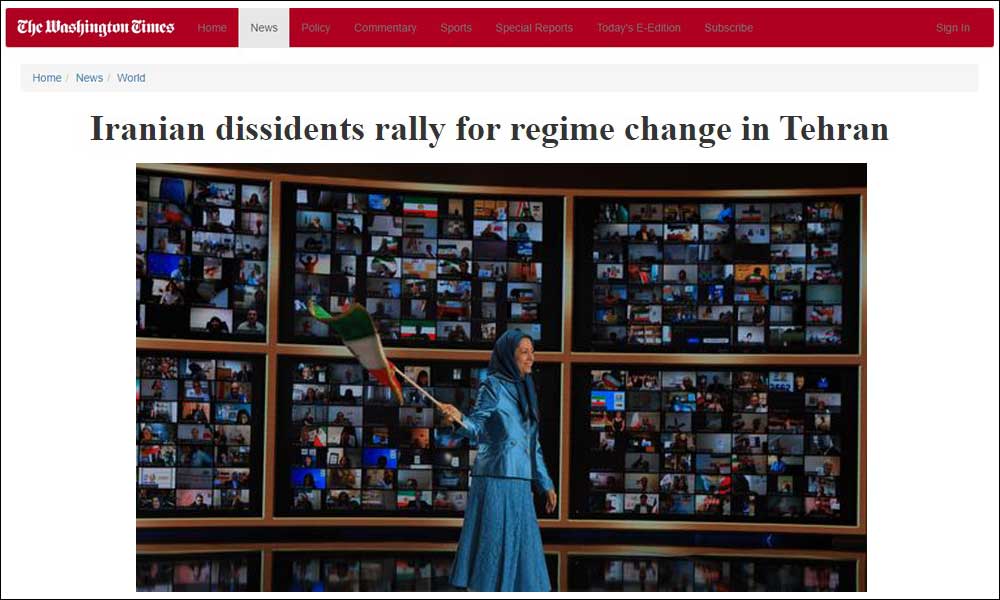 Iran’s theocracy is at the weakest point of its four-decade history and facing unprecedented challenges from a courageous citizenry hungry for freedom, Iranian dissidents and prominent U.S. and European politicians said Friday at a major international rally calling for the downfall of the dictatorship in Tehran.

The annual “Free Iran Global Summit,” held virtually this year due to the COVID-19 pandemic, brought together Iranian resistance groups and their allies around the world behind the common cause of pushing to replace Ayatollah Ali Khamenei’s regime with a nonviolent democracy.

The summit — organized and hosted by the multinational umbrella organization the National Council of Resistance of Iran (NCRI) and its associate group, the People’s Mujahedeen of Iran (MEK) — was something of a technical marvel, uniting via Zoom tens of thousands of participants from 102 countries and 30,000 separate locations around the world.

Some Iranian resistance activists were even broadcasting into the summit from inside Iran at tremendous risk to their own safety, given the Khamenei regime’s history of violently cracking down on internal opposition.
Behind the logistical triumph was a simple message from the NCRI organizers that Iran’s clerics and terrorist sympathizers are living on borrowed time, facing unprecedented anger from within and crushing external pressure as the Trump administration’s financial sanctions campaign against Tehran continues to squeeze the Iranian economy.

“This generation is a constant nightmare for the mullahs. Indeed, the clerics have come face to face with a rebellious generation against which they are vulnerable,” acting NCRI President Maryam Rajavi said during a passionate address Friday morning.

Mrs. Rajavi delivered her address from the Ashraf-3 complex in Albania, which has become the headquarters of the movement and is home to MEK dissidents and resistance fighters dedicated to overthrowing an oppressive government that has ruled Iran since the Islamic Revolution of 1979. Leaders of the NCRI, which is comprised of multiple other organizations, say the council has seen its stature grow to the point that Iranian officials can no longer deny its influence.
The NCRI has many American supporters, including some with close relationships to Mr. Trump, such as former New York City Mayor Rudolph Giuliani, one the president’s personal lawyers. They say the organization not only has galvanized tens of thousands of Iranians behind its cause but also has fashioned itself into something of a shadow government that could potentially step into power in Tehran if the regime falls.

“We know the truth and they know the truth: They know this organization is a total threat to them,” Mr. Giuliani said during a speech delivered to Friday’s virtual summit.
“When they see today, this gathering of people taking advantage of Zoom and the new modern methods of communication,” he said. “They realize they have a formidable foe. They realize and can foresee how this group could easily stand up an interim government that could be a bridge to a permanent, democratic, free, prosperous and wonderful Iran.”

Mrs. Rajavi, Mr. Giuliani and other speakers said the wave of popular protests inside Iran over the past three years prove that the time is ripe for dramatic change. In 2017, 2018, 2019, and again in January, swarms of protesters took to the streets to demonstrate against Iran’s leaders and their policies.
Thousands of those protesters, the NCRI and others have estimated, were killed or imprisoned as a result, though the Iranian government denies those claims.
Friday’s Free Iran summit was the first since Tehran and Washington came to the brink of all-out war last summer. After a series of military encounters in the Strait of Hormuz and Iranian-backed attacks on Americans inside Iraq, President Trump ordered an airstrike to kill Iranian Gen. Qassem Soleimani, the leader of Iran’s Quds Force and a designated terrorist.

Iran responded by firing rockets at U.S. personnel stationed in Iraq, though no Americans were killed. The two nations ultimately pulled back from the brink of war, but the administration continued its economic pressure campaign and urged its European allies to fully scrap the Obama-era nuclear deal. Mr. Trump exited the deal in 2018, arguing that it was too weak and still gave Tehran a pathway to nuclear weapons.

That pact was designed to offer Iran economic relief in exchange for giving up its nuclear weapons program. But instead of investing in its people, critics argue Iran’s leaders used the money they received to enrich themselves and covertly deliver funds to terrorist organizations such as Hezbollah.
“They’d rather send people to bomb us in Paris or to kill some of you in America than to feed their people,” Mr. Giuliani said Friday.
Even across Europe, where the Iran nuclear deal was much more popular than it was in the U.S., officials say Iran’s leadership has proven it can’t deliver for its people.

“The Iranian people want change, to have democracy, finally to have human rights, to finally have economic wealth, no more hunger. The will of the people is much stronger than any oppressive measure of an Iranian regime,” said Martin Patzelt, a member of German Parliament.
Whether it was the Iran nuclear deal or other policies, all efforts to reform the government in Tehran have failed and the only remaining option is for the Iranian people to rise up and install new leadership, said former U.S. Sen. Lieberman.
“We have reached a point where we can conclude, after all that has been tried with this criminal syndicate that is holding the people and history and culture of Iran hostage, that everything that has been tried has not worked,” he said. “It will come from the resistance fighters in Iran … and when they do turn their resistance into rebellion, we and the rest of the world — particularly the United States — must stand with them and support them. I am convinced that is a day that is coming.”