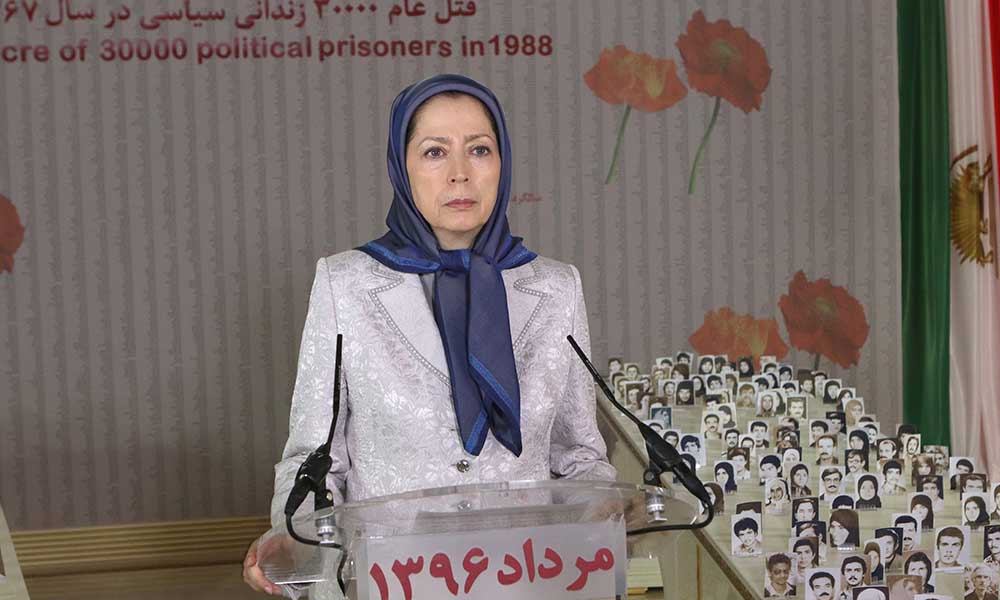 Fellow compatriots, 29 years ago on these days, Khomeini, the century’s most ruthless murderer, launched the massacre of 30,000 political prisoners affiliated with the PMOI and other dissident groups.

He sought to uproot the resistance movement in a bid to preserve his own rule. He wanted to do something that no one would ever again think of change and of freedom. He found his answer in the hasty annihilation of the PMOI and all those who persisted on the ideal of freedom.

In the face of such unprecedented brutality, the PMOI prisoners took pride in going to the gallows in the thousands. They registered themselves in the historical conscience of their nation as symbols of dedication and loyalty to the cause of freedom. And the history of Iran was blessed with the light and hope of their unwavering resistance.

Throughout the years, their blood has continued to run in the veins of society, provoking the spirit of rebellion and protest in the struggle against the tyrannical clerical regime.

Our endless salutes to all the prisoners massacred in 1988 who persisted on their positions against the Velayat-e Faqih under interrogation and stood up for freedom. Their struggle and resistance has been battering the regime since then until now.
Khomeini concealed their names, but they are the most famous men and women of Iran’s modern history. The regime hid their graves, but they have remained the most spirited and obvious members of the nation fighting in the field. Long years pass since they kissed the gallows, but they continue to sing the crimson anthem of freedom.

My fellow compatriots and courageous youths,
Last year, on July 28, 2016, the families of martyrs and political prisoners issued a statement announcing a campaign commemorating the victims of the 1988 massacre. The movement demanding justice for the victims of the massacre is now one-year-old. During this period, the campaign energized by the victims’ sacrifice and our nation’s will to achieve freedom has time and again shaken up the clerical regime that relies on massacre.
It has brought about broad-based knowledge in Iranian society particularly among the youth about the dreadful crimes committed by the Velayat-e Faqih regime. It shattered the mullahs’ conspiracy of silence to cover up the 1988 massacre and compelled the ruling clerics to confess to their involvement in this crime against humanity.

The justice seeking movement dealt a heavy setback to Khamenei who had nominated a death-commission member for presidency. It defeated the regime in its totality in the elections sham, as the nation embraced the movement’s slogan of “no to the executioner, no to the charlatan.” The campaign also resuscitated this case internationally while it had been silenced by the western governments’ policy of appeasement.
These efforts led to the point where the UN Secretary General noted the 1988 massacre in his annual report this year.

This year-long campaign proved that the Velayat-e Faqih regime is extremely vulnerable with regards to the slaughter on which the pillars of its rule rest. As a result, every effort by the mullahs to incriminate the PMOI immerses them even further in a quagmire of disgrace.

Since the outset, when the news of this massacre began to leak out of prisons, the Iranian Resistance has endeavored to expose this crime on the international level. In a letter to the UN Secretary General at the time, Massoud Rajavi, the leader of the Iranian Resistance, wrote, “The international community must compel the regime to answer questions about the identities of all those executed, the date, place and manner of executions and their place of burial. It must introduce those in charge and those who carried out this major crime.”

In the past year, too, supporters of the Iranian Resistance risked their own lives to collect the previously unannounced names of victims of the massacre and addresses of their graves, as well as information about members of the death commissions in the provinces.

I thank all of them and everyone who joined the justice seeking movement over the past year. I thank all the youths and students who voiced their demand for justice for victims of the 1988 massacre at any opportunity, and the prisoners who supported the movement under the most difficult circumstances.

Nevertheless, everything done so far has been only the first step. The Iranian people and Resistance will not relent until those in charge of the massacre of political prisoners, namely those who hold the highest positions of authority in this regime, face justice.
In the start of the second year of the movement calling for justice, I urge everyone to help further expand the movement. This is part and parcel with the Iranian people’s quest for freedom and the overthrow of the regime in its entirety. Accordingly,
1. I call on all the courageous youths of this land to stage protests to compel the regime’s leaders to publish a complete list of names of those massacred, addresses of their graves, and names of those in charge of the slaughter.

2. I call on the families of martyrs and political prisoners to gather at the gravesites of their martyrs and in this way force the clerical regime to recognize their trampled right to hold memorial ceremonies for their heroic children.

3. I call on my fellow compatriots to actively participate in the national campaign to collect the information of the martyrs, find their tombs and expose the mullahs and murderers involved in this crime.

5. I call on parliaments, political parties, human rights organizations, religious leaders, political and social personalities in various countries to strongly condemn the massacre of political prisoners in Iran in an act of solidarity with the Iranian people. They should urge their governments to make their continued political and commercial relations with the mullahs’ religious dictatorship contingent on end to executions and torture in Iran.

6. I urge the UN High Commissioner on human rights to immediately set up an independent committee to investigate the 1988 massacre and subsequently put those in charge before justice. I urge the UN Security Council to make the arrangements for prosecution of the regime’s leaders for committing crime against humanity.

All the major cases of carnage and repression in the past quarter of a century in Iran are linked to the person of Khamenei and his corrupt offices. He earned succession to Khomeini by actively participating in the 1988 massacre, and must be prosecuted for crimes against humanity before all the other leaders of the regime.

Dear compatriots, the main target of the massacre in 1988 was the PMOI. Khomeini taught his successors that to preserve power, they must annihilate the group that persists on its positions. In the past three decades, Khamenei and his accomplice, have put this lesson into practice.

In contrast, the PMOI and the National Council of Resistance of Iran, as the democratic alternative to the regime, are the force of victory and freedom. They will realize their glorious goal by relying on the people of Iran. On that day, the victims of the 1988 massacre and all the 120,000 martyrs fallen for Iran’s freedom will live in the determination of Iran’s youths, in 1000 bastions of rebellion, 1000 Ashrafs, and in the army of freedom. They will thus start a blessed era of freedom, democracy and equality.
Endless salutes to the shining stars of the Iranian Resistance, the proud martyrs of 1988.
And hail to the pioneers who have risen to call for justice for the victims and continue their path and cause on a higher level for Iran’s freedom. 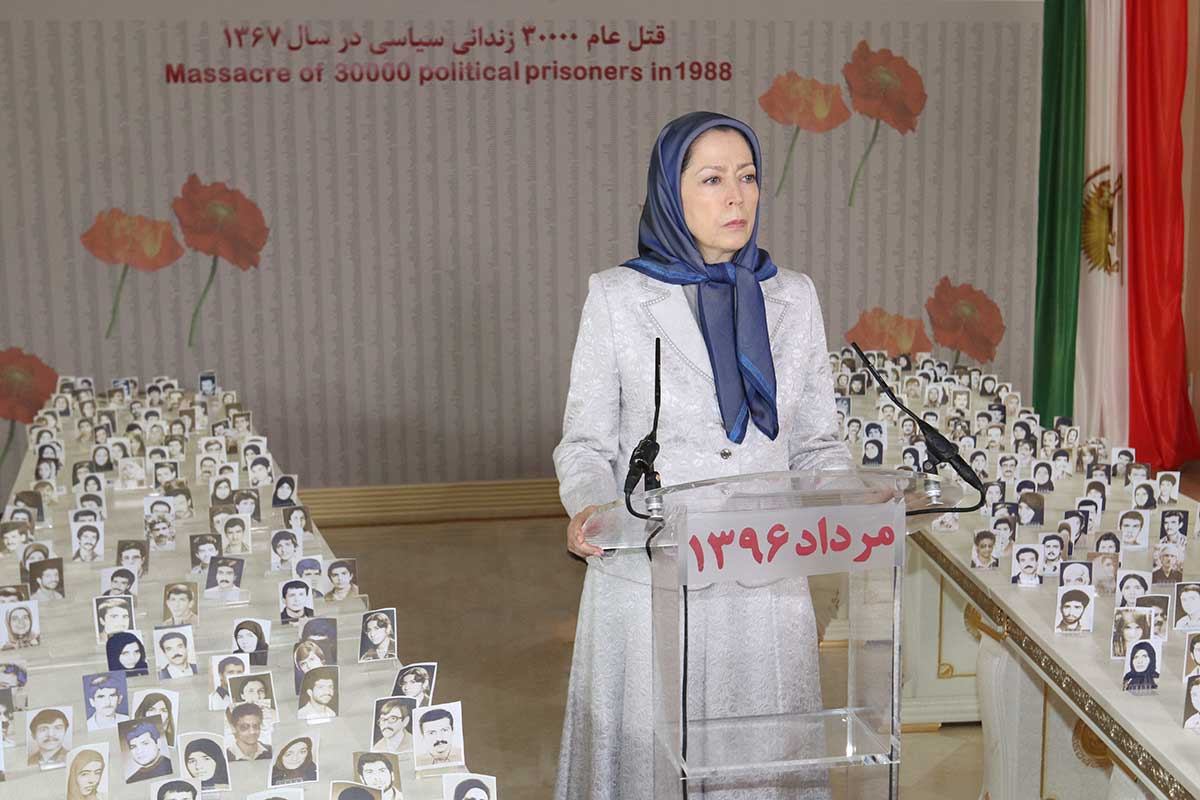 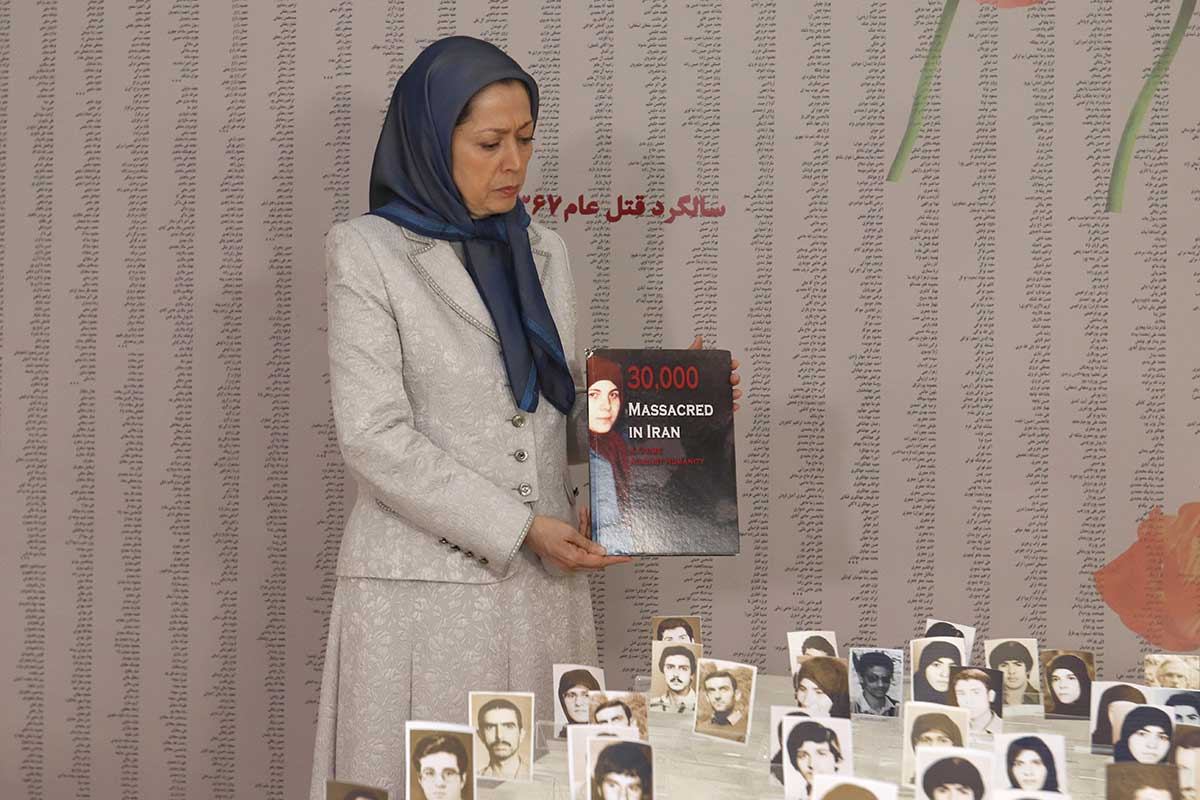