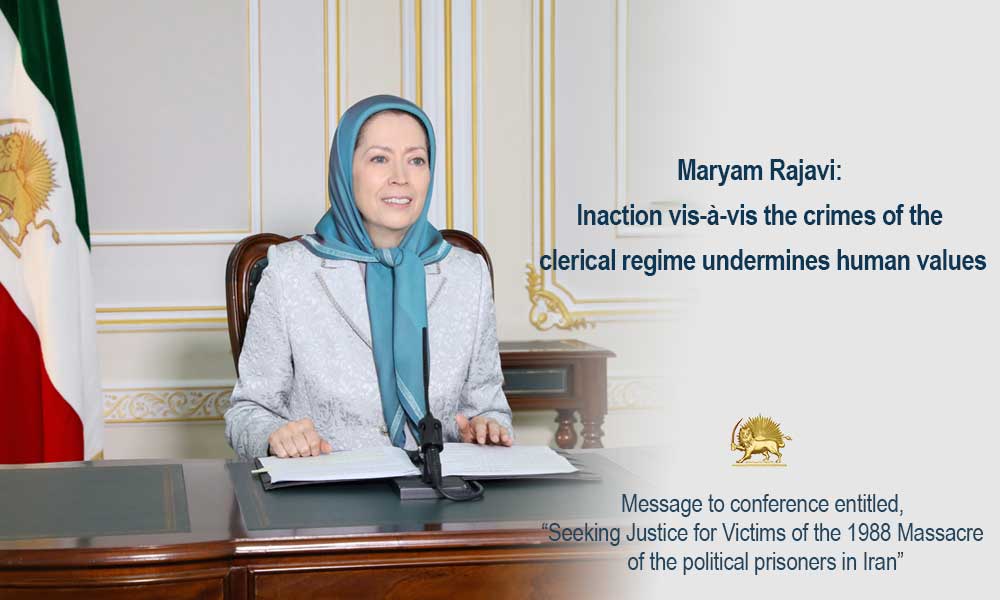 Message to conference entitled, “Seeking Justice for Victims of the 1988 Massacre of the political prisoners in Iran”

Honorable members of parliament,
Distinguished personalities,
Fellow compatriots and supporters of the NCRI,

Thank you for holding this important conference on the Iranian people’s human rights.
I would also like to express my gratitude to prominent members of both houses of parliament in the UK, political dignitaries and human rights advocates for standing with the Iranian people and Resistance.

Dear friends,
Amnesty International published a shocking report last week, about Iran, entitled, “Trampling Humanity.” The report explained the inhuman treatment of those arrested during the November 2019 uprising.
It said at least 7,000 were arrested during the protests, also explaining the details of the tortures inflicted on the prisoners. The extent of savagery, before anything else, indicates that the regime has failed to put out the flames of resistance despite massive crackdown and killing of at least 1,500 protesters in November.

These days also mark the 32nd anniversary of the 1988 massacre of more than 30,000 political prisoners in Iran. The vast majority of the victims were members and supporters of the PMOI.
As Baroness Boothroyd once said: This is the greatest unpunished crime against humanity since the World War II.

The international community including Europe turned a blind eye on this great crime because they wanted to appease the mullahs’ tyranny for petty economic interests. So, they ignore the values and principles for which millions of Europeans and others sacrificed their lives.

To put an end to the crimes of this regime, and to counter its warmongering actions in the region, the following steps are necessary:
1. An international fact-finding mission must be set up to seek justice for victims of the 1988 massacre, and hold the perpetrators of this grave crime against humanity accountable.
2. The UN Security Council must address the terrible situation of human rights in Iran. The UN Security Council must send to Iran an international delegation accompanied by representatives of the Iranian Resistance. They must visit the regime’s medieval prisons, visit the prisoners and particularly, meet those arrested during the November 2019 uprising.
3. As the Iranian Resistance called for, just a few hours after signing of the JCPOA, the six UN resolutions must be re-imposed and all sanctions on weapons sales to Iran must be re-imposed. Supporting the Iranian people’s desire to overthrow the regime ruling Iran is necessary for peace and stability in the region.

In conclusion, I would like to extend my gratitude to you, as elected representatives of the people of Britain and as the UK’s elite, for persisting on your just positions over the years in defense of the legitimate right of the Iranian people and Resistance to struggle for freedom,
and for persisting on the need to adopt a firm policy against the mullahs.
God bless you all.