Maryam Rajavi: The criminal verdicts of imprisonment and execution of young protesters signal desperation of a moribund regime 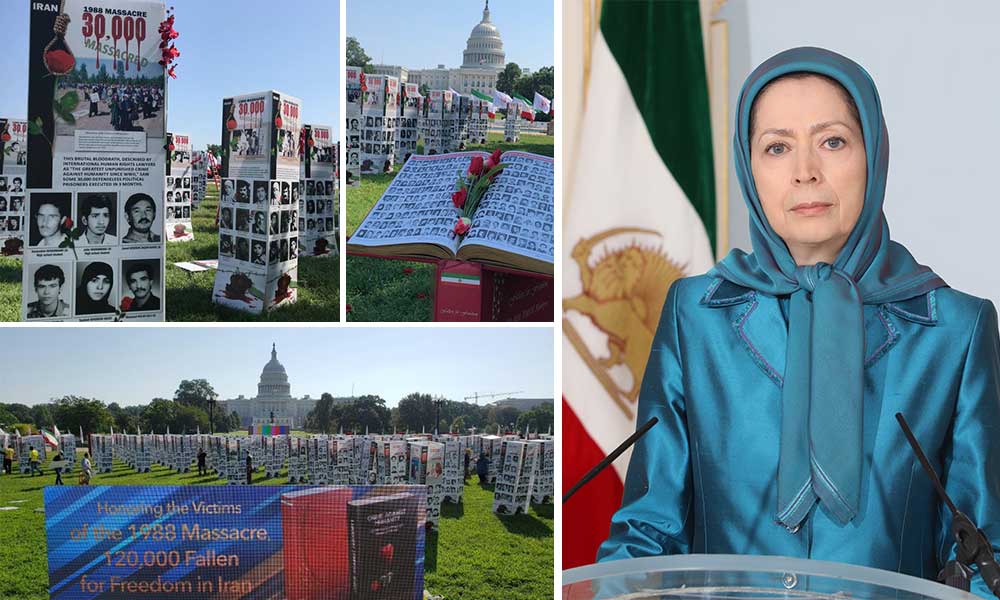 Message to the participants in the Exhibition of 120,000 martyrs for Iran’s freedom

Dear compatriots,
Distinguished personalities and dear friends,
Greetings to you all.

And I thank all those involved for their efforts in setting up this invaluable exhibition.
Holding this exhibition is particularly inspiring and effective on the 32nd anniversary of the massacre of 30,000 political prisoners in Iran in 1988.

Nonetheless, it depicts only a small part of the crimes and terrorism committed by the ruling religious fascist regime.

One of the most horrific cases committed by the clerical regime was the massacre of political prisoners in 1988. Khomeini issued the fatwa for this massacre. He viewed the annihilation of the Mojahedin, as a guarantee for his regime’s survival.

In the handwritten fatwa for the 1988 massacre, Khomeini wrote: “If anyone at any stage maintains his/her support for the Monafeqin [PMOI/MEK], his/her sentence must be execution. Destroy the enemies of Islam at once.”

With this decree, more than 30,000 political prisoners were executed within a short span of time in prisons all across Iran. The vast majority of them were PMOI/MEK prisoners who were executed and buried secretly in mass graves.

At the time, Hossein Ali Montazeri, Khomeini’s heir who was later sacked, wrote to him that the PMOI/MEK represents a form of logic and school of thought, which cannot be eliminated by killing. Killing them will multiply them.

In the past 32 years, the Iranian Resistance has persistently called for the masterminds and perpetrators of this great crime against humanity to be held accountable.

Unfortunately, due to the Western policy of appeasing the ruling religious tyranny, those who ordered and perpetrated this crime, namely the regime’s most senior leaders, have so far evaded facing justice.

At the time of the 1988 massacre, Ebrahim Raisi, the mullahs’ incumbent Judiciary Chief, and Alireza Avayi, Rouhani’s Justice Minister, were members of the Death Commissions, and Khamenei and Rouhani were among the regime’s top officials.

And now, more than three decades later, the blood of the victims of the 1988 massacre is roaring across Iran and inspiring young people. The PMOI martyrs who, while invoking the name of Massoud Rajavi as their leader, walked to the gallows by the thousands to uphold the cause of freedom, are today the topic of debate in Iranian society.

A couple of days ago, Amnesty International published a comprehensive report entitled, “Trampling humanity: Mass arrests, disappearances and torture since Iran’s 2019 November protests.” It documented the deliberate use of lethal weapons and the arrests of over 7,000 men, women and children between 10 and 18 years old within a few days. The report explains the details of barbaric tortures used to forcibly extract confessions from those arrested. At least 1,500 were killed during the protests in November 2019.

The savage execution of Mostafa Salehi and the Judiciary’s ruthless decrees for the execution of detained protesters, indicate the desperation of a regime on its last legs.

The criminal verdicts for Navid Afkari, a young wrestler, and his two brothers, and for other prisoners who are among the country’s most enlightened youths attest to the regime’s panic and fragility.

I have continually called on the international community to condemn the clerical regime and to take urgent action to stop the executions. I urge you to persistently follow up on this to prevent these inhuman verdicts from being carried out against Iran’s young generation.

The flip side of terrorism

Dear friends,
Over the past 40 years, in addition to suppression, the mullahs have been targeting the PMOI/MEK and the Iranian Resistance every day with their slanders and lies in an extensive and expensive demonization campaign.

The flip side of the demonization campaign is the mullahs’ unbridled terrorism, the sharp edge of which is directed against Iranian dissidents, specifically the PMOI/MEK and the Iranian Resistance.

One of the regime’s terrorist diplomats and three of his accomplices are presently awaiting trial in Belgium. They are imprisoned for conspiring to bomb the Iranian Resistance’s Grand Gathering in Villepinte, Paris, in June 2018.

The government of Albania expelled the regime’s ambassador and his deputy from that country for a similar attempt to bomb the PMOI/MEK’s Nowruz gathering in Albania in March 2018.

Last week, the U.S. Secretary of State designated 13 Iranian terrorists who had been involved in the 1990 assassination of Dr. Kazem Rajavi near Geneva and the European seat of the United Nations.

The Iranian Resistance’s Leader Massoud Rajavi said in this regard: “In addition to my brother, Kazem, those who masterminded and perpetrated all the assassinations and crimes of the clerical fascism in Iran and abroad must be blacklisted and punished… This is in addition to hundreds of terrorist crimes of the mullahs’ religious dictatorship in Iraq and the Kurdistan of Iraq against the Iranian Resistance, the peshmargas and our Kurdish brothers.”

The time has come for the closure of the Iranian regime’s embassies which serve as centers for terrorist operations. The clerical regime’s leaders must also be held accountable and punished for their crimes.

The experience of the past 40 years has shown that no amount of political and economic concessions will change the behavior of the mullahs’ regime.

The international community must, therefore, adopt a firm policy and apply maximum pressure on the regime, including referring its human rights record to the UN Security Council. It must also implement the six UN Security Council resolutions and stand with the people of Iran and their organized Resistance.

I thank all of you and all your efforts.