200-plus killed in Iran uprising 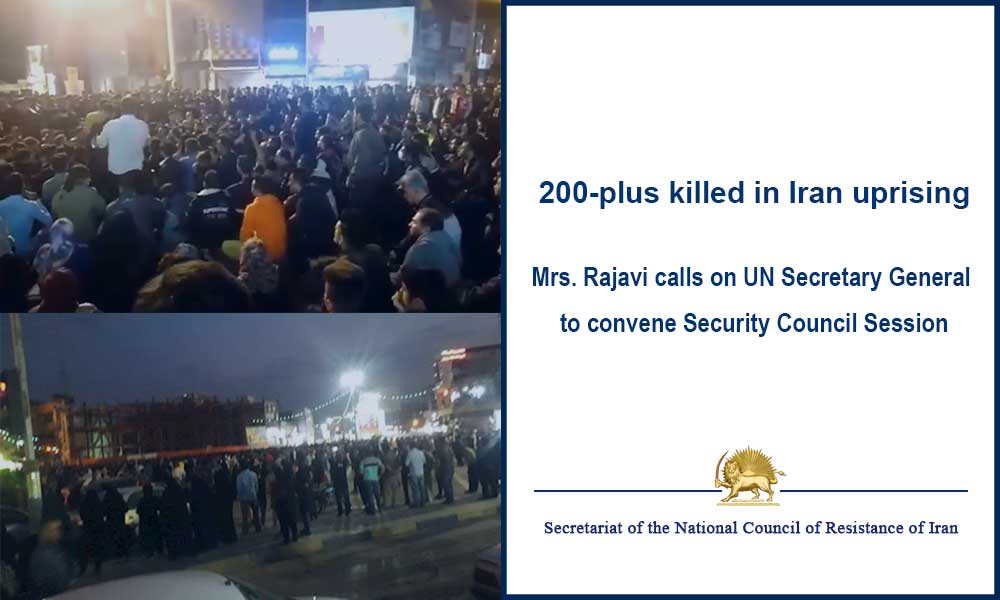 More than 200 protesters have been killed during the Iranian people’s nationwide uprising. Thousands have been wounded. On November 17, 2019, the Revolutionary Guards said 1,000 had been arrested, though the actual number is much higher.

Mrs. Maryam Rajavi, the President-elect of the National Council of Resistance of Iran (NCRI), called on the United Nations Secretary General António Guterres to brief the Security Council about the atrocities perpetrated by the religious dictatorship ruling Iran, its Supreme Leader Ali Khamenei, and the IRGC, in view of the rising number of those killed and wounded. She urged him to convene an extraordinary session of the Council.

Silence vis-à-vis the crimes against humanity perpetrated in Iran every day is absolutely unacceptable, Mrs. Rajavi underscored, adding that the Security Council must declare the regime and its leaders responsible for crime against humanity for which they must face justice.

The martyrs are mostly young adults and teen-agers, many of them shot in the head and chest. The number of those killed is actually much higher. The regime is using an assortment of ploys to conceal the actual figure. In many cases, the suppressive forces do not hand over the bodies of the dead to their families and even refuse taking them to the coroner’s office, instead burying them in unknown locations.

Secretariat of the National Council of Resistance of Iran
November 18, 2019