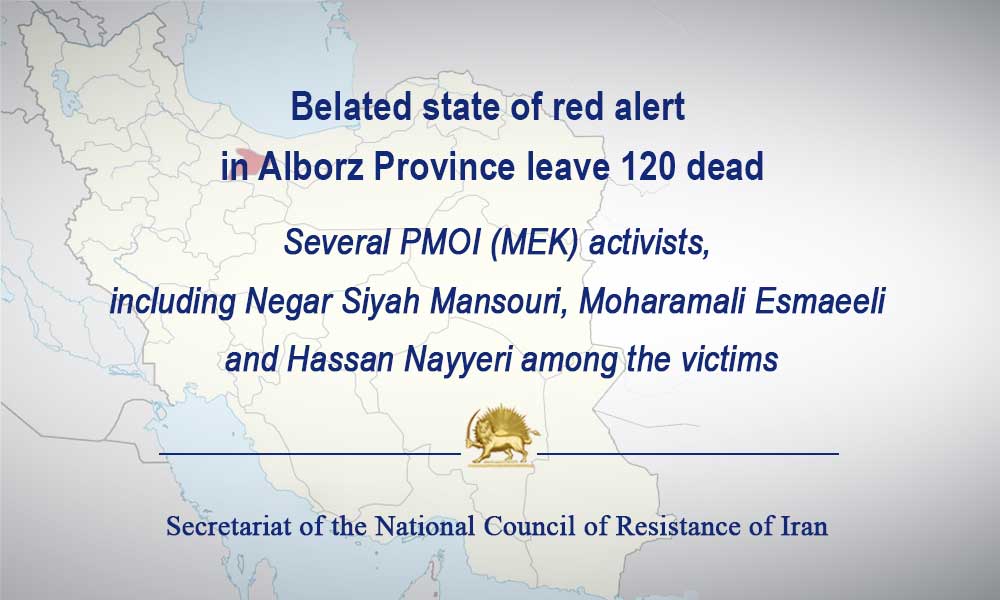 Yesterday, the mullahs’ regime belatedly announced the state of red alert in Alborz Province. Akbar Saliminejad, head of the so-called “Islamic Council in Karaj,” asked the people to “stay at home and refrain from unnecessary commutes and attendance of gatherings and parties…”

The People’s Mojahedin Organization of Iran (PMOI/MEK) announced that the death toll in Alborz Province has reach 120 victims. Several members of Resistance Units and MEK supporters, who had rushed to assist those infected, are among the victims, including Negar Siyah Mortazavi, Moharamali Esmaeeli, and Hassan Nayyeri in Karaj and Sorkh-e Hessar.

Yesterday, Ali Mozzafari, the Judiciary Chief in the city of Qom, and IRGC Brig. Gen. Abdolreza Aghakhani, the city’s State Security Force commander, threatened those publishing the actual figures of Coronavirus victims. Mozzafari warned that anyone publishing non-official figures will be prosecuted. He said a nurse had been arrested for “providing false figures on the death toll in Qom,” and a young cleric had been detained for airing a clip from the Qom’s mortuary center. Aghakhani added, “Internet police is monitoring the social and print media in the Province on a daily and hourly basis.”

Khamenei turned the city of Qom in to a killing field because he wanted to ensure a high turnout in the February 11 revolution anniversary and the February 21 sham election. The number of fatalities in the city has now surpassed 500, with bodies being stored in morgues. Nevertheless, the regime operatives continue to threaten and intimidate the public.

Mrs. Maryam Rajavi, the President-elect of the National Council of Resistance of Iran (NCRI), said in this respect: The oppressed people of Qom are now enduring a multifaceted calamity and pressure. While no government official even dares to visit the city, and clerics have escaped from Qom, dignified physicians, nurses and medical staff in the city are working under dire conditions. Patients and hospitals are denied minimum provisions. And now they must tolerate the insults, innuendos, threats, and arrests by the mullahs’ regime.

Secretariat of the National Council of Resistance of Iran
March 10, 2020