Maryam Rajavi at the european parliament on Iran’s Nuclear Accord 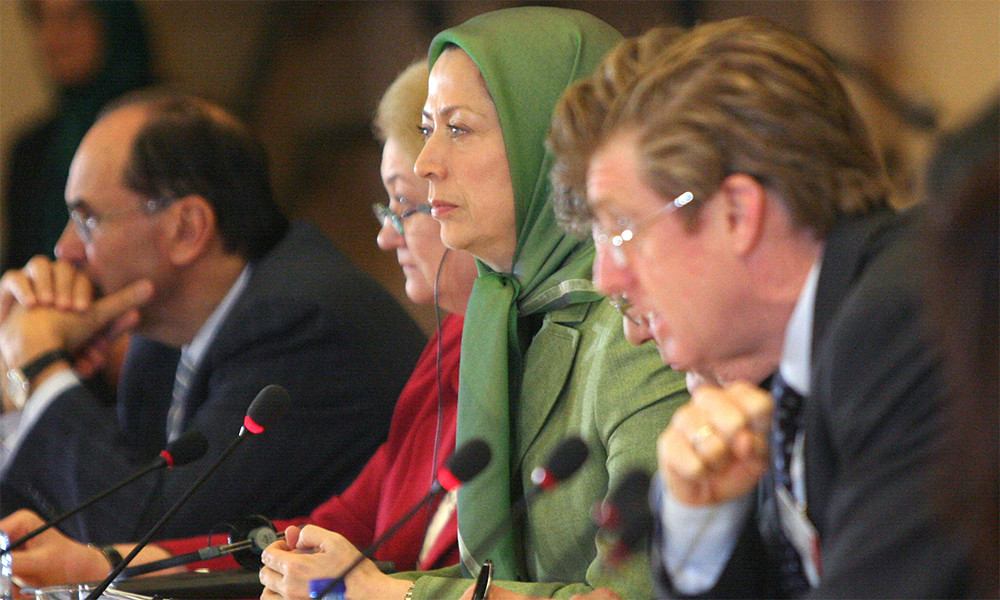 Mr. Gérard Deprez,
Chairman of the Friends of a Free Iran in the European Parliament,
Honorable representatives,
Dear friends,
I am very pleased to be here in Europe’s house of democracy.
And I would like to thank you for your concern about violations of human rights in Iran and the Iranian people’s Resistance.
An election sham was held last week in Iran.
An election without any opposition, which was in fact a race among present and former officials in charge of torture and executions.
But the show was important from several angles:
Firstly, all the candidates had already proven their loyalty and servitude to the mullahs’ supreme leader and his policies of domestic repression, as well as terrorism and warmongering.
In fact, all of them are cut from the same cloth.

For example, the list of candidates sponsored by the so-called moderate faction, included the present minister of intelligence and three former ministers of intelligence, each of whom have long records in espionage and massacre of innocent people.
The list also includes a religious judge who personally issued a stoning decree and oversaw its implementation. The video clip of this dreadful crime was exposed by the Iranian Resistance years ago.
Therefore, the two rival factions have no differences over their visions. Their dispute is over gaining power.

The other fact is that despite calls by all the ruling factions, the majority of the people of Iran refused to vote.
Despite their earlier claims and theatrics, the mullahs were not able to cover up such extensive public apathy towards the sham elections, especially the ignorance of youths.
They are so concerned about public upheavals that as the regime’s Interior Minister admitted, they deployed some one million security forces to keep the situation under control during the elections sham.
We had already declared that the mullahs are entangled in a political crisis. The elections sham revealed the fact that the regime’s internal balance has become upset against Khamenei.
In other words, the elections has exposed a deep schism at the top of the regime which has further aggravated its fundamental instability.

In the meantime, the regime has no way towards opening and moderation.
The regime’s factions, including the Rafsanjani-Rouhani faction and their allies who entered the parliament share common viewpoints on domestic suppression, exportation of terrorism and plunder of the public’s wealth.

We remember the eight years of Rafsanjani as the regime’s president, which were accompanied by atrocious suppression of popular uprisings and assassinations of opposition figures in foreign countries.
He and his cabinet members are pursued by the judiciaries of Germany, Switzerland and Argentina.
Today, you can see first-hand that 2,300 executions have taken place under Rouhani and the massacre of the people of Syria has been escalated.

In addition, Khamenei will never abandon power as he relies on the Revolutionary Guards Corps. Any form of change in the regime will lead to its overthrow.
As a result of this election, the regime will become generally weaker and further paralyzed.
I must also point out that the elections outcome will not change anything in the Iranian people’s political and economic life. And that there is no serious winner within the regime.
After the nuclear deal, the regime executed hundreds of people contrary to some expectations in the West.
Arrests of the families of Camp Liberty residents, as well as harassment of journalists, lawyers, followers of other faiths, and ethnic minority youths continue forcefully.
Ballistic missile tests and maneuvers persist .The Iranian regime formally announced that it does not comply with UNSC resolution 2231.

On the regional level, the mullahs have escalated their aggressive interferences in Syria and genocide of the defenseless people of that country under the auspices of Western inaction.
The mullahs have dispatched at least 60,000 guards and mercenaries to Syria. IRGC is the main ground force at work in this dreadful war.

They brutally massacre all the civilians, not sparing even school children and the ill; they encircle and destroy residential areas; they have left millions of people homeless and launched an extensive genocide.
Ironically, the Iranian regime uses the money it gets from the West after lifting of the sanctions, to buy advanced weapons for Assad regime. The weapons are then used to murder the people of Syria and cause a wave of refugees to escape to the same Western countries.

The people of Iran strongly detest the IRGC’s bloodbath in Syria.
At the same time, the Iranian regime has adopted a policy of double-standards.
Despite being the main cause of instability in the region, the regime claims to be a proponent of diplomacy and talks to resolve the problems of the region.
This is a great deception.
Genocide in Syria is part of the regime’s strategy of survival but it has turned into a quagmire for the regime.
The European Union, however, has acquiesced over the past two and a half years to the violations of human rights in Iran and the regime’s complicity in the massacre of the people of Syria.
On behalf of the Iranian Resistance, I warn that the failure to adopt a decisive policy on human rights abuses in Iran will embolden the mullahs to resume their bomb-making project and further engage in genocide of Syrian people and warmongering in foreign lands.

Dear friends,
I would like to conclude my remarks, by stressing a few points and I would like to seek the assistance of MEPs who advocate peace, democracy and human rights, for their realization.
A major part of the Iranian regime’s murderous policy against the people of Iran, is their attacks against the residents of Camp Liberty. The October 29 rocket attack on Camp Liberty which was carried out by the Iranian regime’s agents in Iraq, left 24 dead.
I urge the European Parliament to demand from its member states to fulfill their pledges for the safety and protection of Camp Liberty.

Western governments must condition their relations and trades with the Iranian regime on the end to executions in Iran and freedom of political prisoners.
The solution to the tragedy in Syria, the crisis in Iraq and instability in the Middle East will be found only after the IRGC is expelled from those countries. The most dangerous thing is to engage and involve the Iranian regime in the case of Syria.
Moderation of the mullahs is an illusion which must be set aside. We have always underlined that a viper never gives birth to a dove.
Finally, in the heart of the right policy on Iran lies respect for Iranian people’s desire to achieve democracy and freedom.
I thank you all very much.