Maryam Rajavi: The mullahs’ regime has never stopped the project of acquiring an atomic bomb and continues its deception 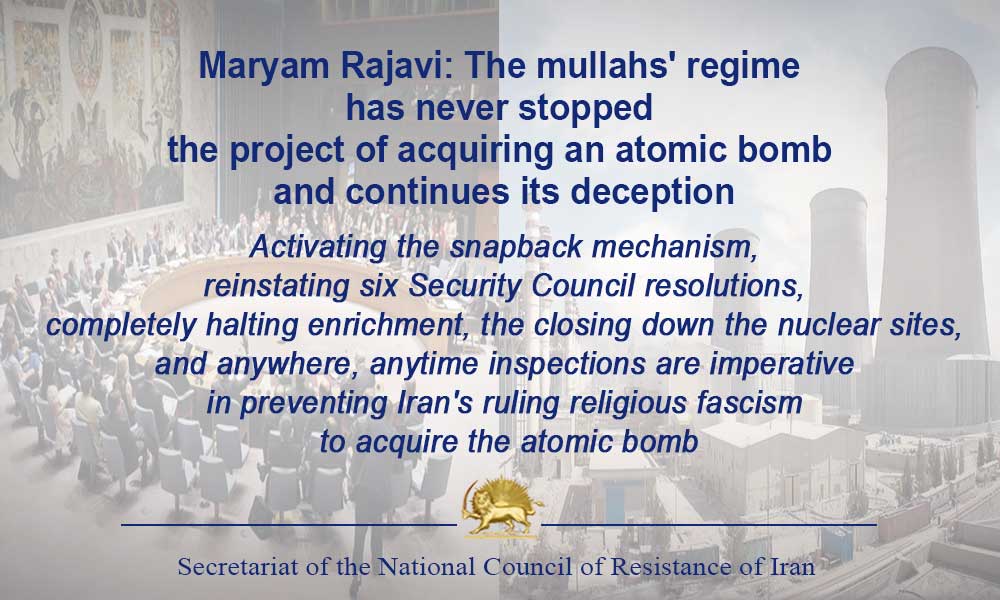 This morning, Friday, June 19, 2020, the IAEA Board of Governors adopted by a majority vote the resolution proposed by the United Kingdom, France, and Germany. According to Reuters, “The U.N. nuclear watchdog’s 35-nation Board of Governors called on Iran on Friday to stop denying the agency access to two suspected former sites and to cooperate fully with it, diplomats attending the meeting said.” The resolution calls on “Iran to fully cooperate with the Agency and satisfy the Agency’s requests without any further delay, including by providing prompt access to the locations specified by the Agency.” This is the first resolution of the IAEA Board of Governors in the past eight years.

In two reports to the Board of Governors in early June, the International Atomic Energy Agency (IAEA) highlighted the repeated violations of the NPT and Additional Protocol and the violation of the Joint Comprehensive Plan of Action (JCPOA) by the regime. One of the two reports, entitled “NPT safeguards agreement with the Islamic Republic of Iran,” states that “As a result of its ongoing evaluations, the Agency identified a number of questions related to possible undeclared nuclear material and nuclear-related activities at three locations in Iran that had not been declared by Iran.”

The report concluded: ” for over four months, Iran has denied access to the Agency, under Article 4.b.(i) and Article 5.c. of the Additional Protocol, to two locations and, for almost a year, has not engaged in substantive discussions to clarify Agency questions related to possible undeclared nuclear material and nuclear-related activities in Iran. This is adversely affecting the Agency’s ability to clarify and resolve the questions and thereby to provide credible assurance of the absence of undeclared nuclear material and activities at these locations in Iran.”

Welcoming the IAEA Board of Governors’ resolution, Mrs. Maryam Rajavi, the President-elect of the National Council of Resistance of Iran (NCRI), said: “The policies and actions of the mullahs’ regime, five years after the nuclear deal with the P5 + 1 countries, leave no doubt that this regime has never give up the project to acquire an atomic bomb and continues the deception and concealment. The regime uses all the facilities and concessions that the nuclear deal has given it to pursue terrorism, foreign warfare and domestic repression.”

Secretariat of the National Council of Resistance of Iran
June 19, 2020