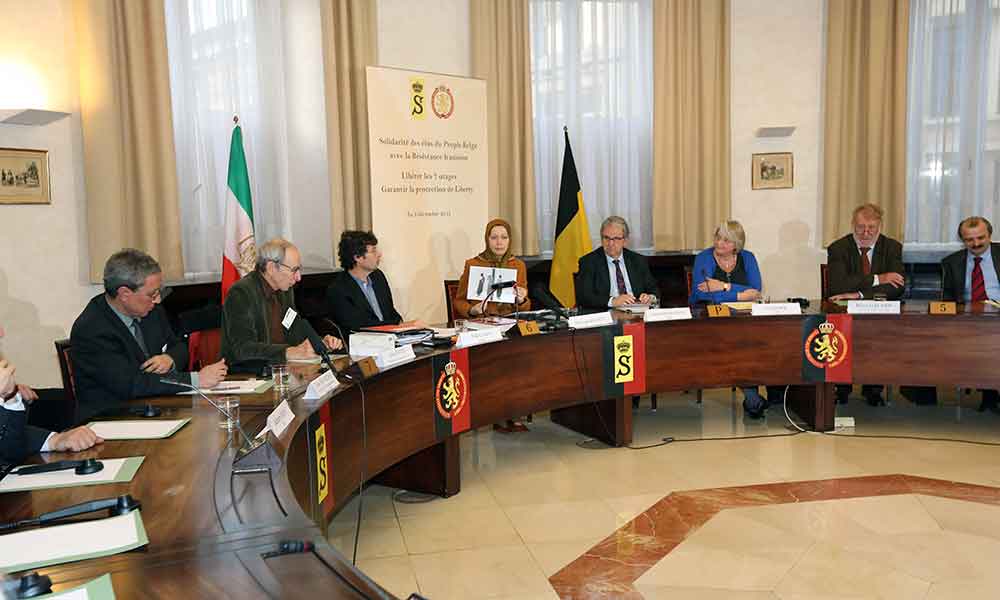 On Tuesday, December 3rd, in a session in the Belgian Senate held with the participation of this country’s lawmakers, Maryam Rajavi, President-elect of the Iranian Resistance, called on Belgian MPs and Senators to defend the rights and freedoms of resistance members in Liberty, and asked the Belgian government to take action on the European Union level to impel the Iraqi government to immediately release the seven resistance members taken hostage and provide security in Liberty.

Maryam Rajavi in her speech referred to the threat posed by the mullahs’ regime for world peace and security and said, “This regime has endangered the entire world through its nuclear weapons program. This regime, through its support and conduct of fundamentalism, has targeted Muslim communities all across European countries, including Belgium. This regime is smashing up the Middle East through war and terrorism. Inside Iran, this regime is at war with the Iranian people through its gross violations of human rights, including executing an average of over 3 individuals a day.”

Referring to the fact that the mullahs’ gave in to the Geneva agreement under the pressure of sanctions and internal and international crises, Maryam Rajavi emphasized, “Until uranium enrichment isn’t fully halted in Iran and the mullahs have not accepted the additional protocol, and until they have not fully implemented the UN Security Council resolutions, the key of bomb-making remains in their hands. The danger of an atomic bomb exists…They are deceptive and very easily violate any commitment… The mullahs count on two elements in this regard: their own deception and the weak policy of the West, especially the US. This is what gives them the opportunity to play with the atomic bomb.”

On behalf of a resistance that has been the most important whistleblower on the regime’s nuclear program and the main element in confronting it, Rajavi emphasized three objectives: “Compelling the mullahs to give in to snap inspections, dismantling all nuclear sites and oxidizing all uranium stockpiles, refraining from any international sanctions relief against the Iranian regime until the regime accepts all UN Security Council resolutions.”

Maryam Rajavi emphasized in another segment of her speech, “To cover its internal weakness, the Iranian regime has intensified suppression and is attempting to above all destroy its main opposition and alternative, especially in Camp Liberty.” She called on the international community, especially the European Union and its High Representative and leaders of Member of States, not to remain silent and instead rise to their duties in the face of the most vicious crackdown of the Iranian dissidents and resistance members and supporters inside Iran, and their massacre in Iraq. The Iranian regime is increasing its crimes inside the country and abroad, being certain of the international community’s soft approach.

Belgian lawmakers, condemning the crime against humanity on September 1st, called on the Belgian government and European Union to demand from the Iraqi government to release the seven Ashrafi hostages and provide security for Liberty, or else revise their economic and political ties with this government.

The speakers underscored that the primary objective of Maliki’s trip to Tehran is to obtain Tehran’s support for his third term as the Prime Minister. This is taking place when Iraqi people and political currents in Iraq, including some of the closest allies of Maliki, are against him holding the office for the third term and widespread opposition to Maliki in the U.S. Congress and public opinion, has made it more difficult for the U.S. Government to extend support for Maliki’s attempt for the third term. The speakers pointed out that in reality Maliki is going to Tehran to get the approval for his third term from Tehran rulers by resorting to more violence and bloodletting that is pervading Iraq.

Secretariat of the National Council of Resistance of Iran
December 3, 2013