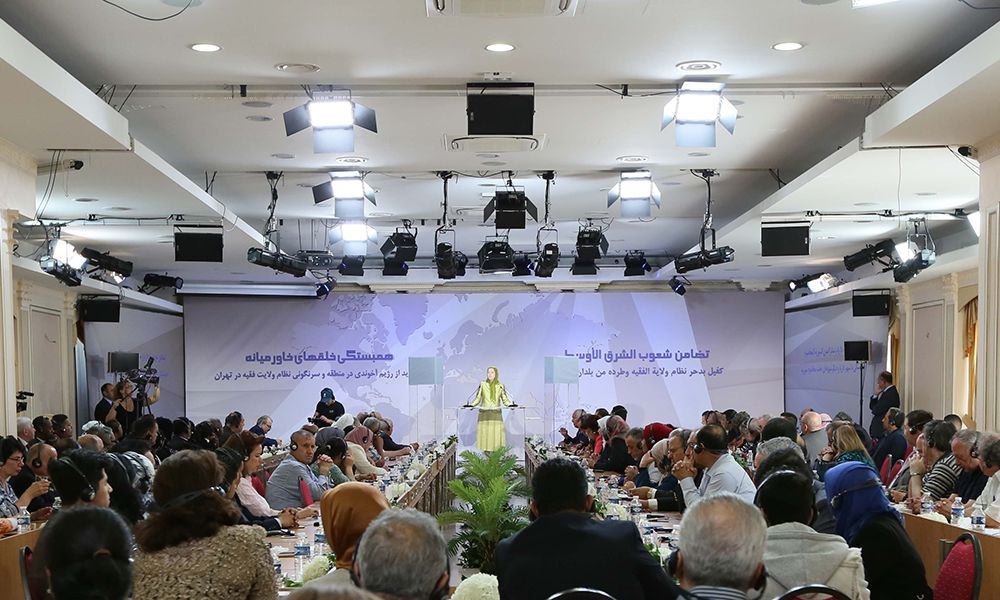 In her speech Maryam Rajavi explained in detail the occupational policies of the religious dictatorship ruling Iran in the region, and emphasizing the necessity and importance to end this regime’s warmongering in Syria. Overthrowing the Bashar Assad dictatorship in Damascus in the beginning of the end of the mullahs’ regime in Iran, she underscored. Maryam Rajavi called on the international and regional countries to 9 urgent and practical measures aimed at bringing an end to the Assad dictatorship and returning peace and tranquility to the region.

1. Condemning the Iranian regime’s atrocities and meddling in Syria by the UN Security Council, UN member states and all other international bodies;
2. Expelling the Iranian regime from the Organization of Islamic Cooperation and cutting ties with the Iranian regime by Arab and Muslim countries following the decisions made by the OIC Islamic Summit Conference in Istanbul, until such time that the regime completely terminates its meddling in the region;
3. Providing broad-based political and financial backing to the democratic Syrian opposition, as well as fulfilling and supplying their essential military needs and weapons;
4. Adopting the necessary international measures to remove the Iranian regime’s forces and affiliated militias from Syria, and undertaking punitive measures including sanctions against the regime. If it refrains from removing its forces, all economic and political relations with the Iranian regime must be made contingent on ending its meddling in the region;
5. Excluding the Iranian regime from any negotiations over the Syrian crisis;
6. Fully implementing UN Security Council resolution 2231 through the adoption of effective practical measures to prevent the Iranian regime’s sending of arms to Syria, Iraq and terrorist groups;
7. Banning all deals and trade with IRGC-affiliated companies;
8. Banning all forms of cooperation and joint action with the IRGC and the militia under its command in Syria and Iraq under the pretext of fighting Daesh;
9. Establishing a no-fly zone in northern Syria to protect the civilian population and to provide help to asylum seekers and displaced refugees.
Maryam Rajavi said: “I have no doubt that regardless of their differences, countries in the region are able to join hand in hand with the Iranian people and Resistance, in order to put an end once and for all to the rule of the Velayat-e Faqih regime and turn the page in the history of this part of the world.”
The Solidarity Conference with Middle East Nations witnessed the participation of delegations from various Arabic and Islamic countries such as Palestine, Egypt, Syria, Jordan, Morocco, Algeria, Bahrain, Kuwait, Lebanon, Iraq, Tunisia, Yemen, the United Arab Emirates, Qatar, Afghanistan, Pakistan, Bangladesh, Azerbaijan, Turkmenistan, Sudan, Mali, Djibouti and …
Mr. Bisam Amush, former Jordan ambassador to Iran, writer and renowned intellectual, presided over this conference. “The articles presented by Mrs. Rajavi enjoys the approval of all the participants in this session and all those who seek peace and tranquility in the region, and to evict the mullahs’ reach,” he emphasized.
The Egyptian parliamentary delegation consisted of ten lawmakers. Deputy Egyptian Parliament Speaker Sulieman Hamid Emara led this delegation and expressed his solidarity with the Iranian people and Resistance.
“We are against the policies of the mullahs’ regime in the region. This regime attempted to transform the Arab World into small zones, and pull the entire Middle East into yet another war through provoking religious fanaticism. Such bigotry that has nothing to do with Islam,” he emphasized. The Egyptian delegation called on all countries and nations of the region to unite in action against terrorism and fundamentalism.

The Syrian Revolution Delegation consisted of dignitaries such as Misters Heitham Maleh, Chairman of the Law Commission; Nasr Hariri, a senior coalition member; Riyadh Seif, a national face and senior opposition member and Ahmed Khetab, a renowned political figure of the opposition.
“To this day Bashar Assad has displaced 14 million people, destroyed 4 million homes and 70% of all the hospitals in various Syrian cities, murdered many of the country’s medical staff and deprived the Syrian people of any development and prosperity. In return, Iran has provided Bashar Assad $40 billion in support,” Mr. Heitham Maleh said.
Delegations from Jordan and Bahrain presented Mrs. Rajavi with statements of their parliament majorities expressing their support for the Iranian Resistance, strongly condemning the July 4th rocket attack against Camp Liberty in Iraq and calling on international interlocutors to provide safety and security for Liberty residents.
Former … interior minister Dr. Bisam al-Amush also delivered a speech in this conference.
“The struggle of the Iranian Resistance is a struggle for freedom, democracy and dignity. The Iranian people deserve a better fate. The mullahs’ regime commits crimes across the region, from Syria, Yemen and Iraq, and a criminal terrorist by the name of Qassem Suleimani is freely commuting in these countries,” he said.
“In the face of this criminal regime it is the duty of all Arabs to support the Maryam Rajavi to ensure the establishment of security and stability not only in Iran, but the entire region and the world over,” he added.