Member of Parliament’s leadership: In two weeks, 50 people died in Qom due to COVID-19 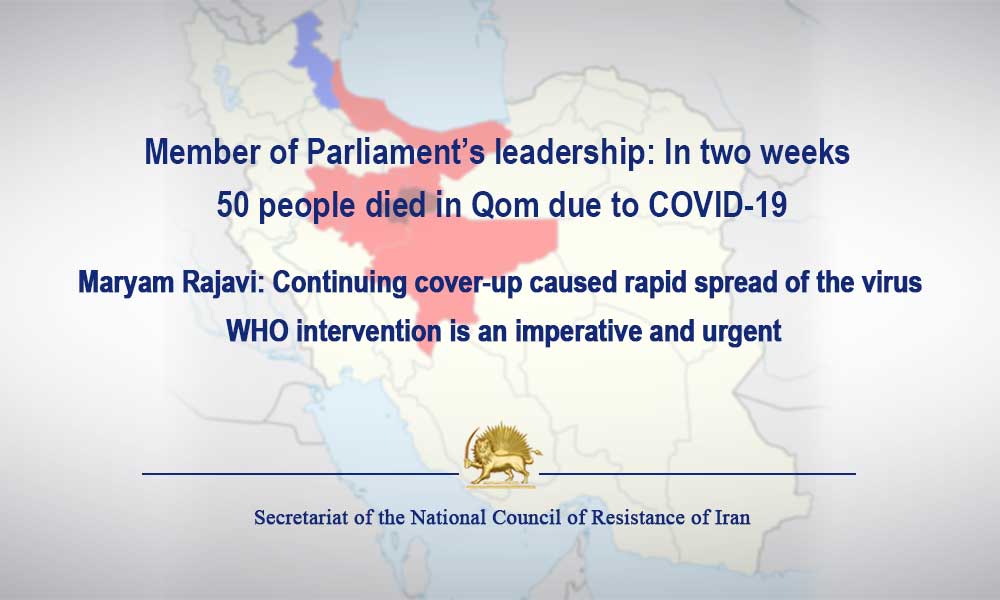 Today, ILNA news agency quoted Ahmad Amir-Abadi Farhani, parliament deputy from Qom and a member of the parliament’s leadership, as saying that in the past two weeks, 50 people in Qom had died because of COVID-19. In response to the denial by Hassan Rouhani’s spokesman Ali Rabiee and deputy Health Minister Iraj Harirchi, Farahani put the list of names of the deceased at the disposal of the Ministry.

The regime’s criminal cover-up because of the 1979 Revolution anniversary on February 11, and the sham election on February 21, as well as continuing IRGC’s Mahan Air flights to China caused the rapid spread of the virus to different parts of Iran and to many of the neighboring countries.
The mullahs’ cover-up and scandalous lies about COVID-19, lack of preventive measures and the failure to provide the necessary resources and equipment such as masks and disinfectants have led to widespread protests by the public. In Talesh, northern Iran, hundreds of youth staged a protest against the regime’s prevarications about the spread of the virus and clashed with the State Security Force. Students at Velayat University in Iranshahr protested a visit to two clerics, chanting, “We don’t want virus stricken mullahs.” In Bushehr, students at Persian Gulf University, held a protest, calling for the closure of the University.

Mrs. Maryam Rajavi, the President-elect of the National Council of Resistance of Iran (NCRI), underscoring that the mullahs’ anti-human regime was continuing to engage in a criminal cover-up and systematic lies about the spread of COVID-19, said that the intervention of the World Health Organization (WHO) and its dispatch of supervisory and emergency medical teams to Iran are both urgent and necessary. The ruling religious fascism was aware of the spread of the virus to Iran since long ago, she said. But in order to mobilize crowds for the 1979 revolution anniversary on February 11 and the sham election on February 21, on Khamenei’s orders, the regime brazenly denied that the virus had spread to Iran and it is now hiding the facts from the Iranian people.
Mrs. Rajavi reiterated that the country’s medical and health care resources, which are monopolized by the ruling mullahs, the IRGC and the security forces, must be put at the disposal of the Iranian people, hospitals, and physicians.

Secretariat of the National Council of Resistance of Iran
February 24, 2020