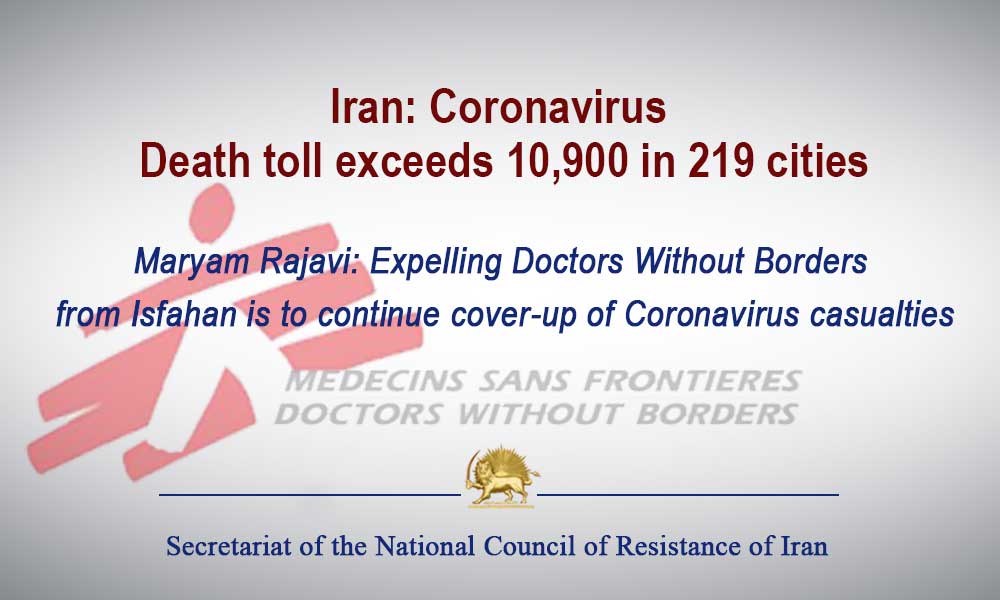 Today, in his daily report abounds in lies, the regime’s Health Ministry representative, acknowledged that “the death toll in Tehran is growing by 13%”. He said that in the last 24 hours, 1762 people have been infected with the Coronavirus, the highest since the beginning.”

Alireza Zali, head of the Coronavirus Combat Headquarters in Tehran, said yesterday, “The statistics of those contracting the virus and the death toll are beyond previous estimates, and require revising the narrative.”

In a letter to the Parliament Speaker, Parliament Deputy Abdul Karim Hosseinzadehwrote, “Iran is only a few steps away from a historic and humanitarian catastrophe. Deputies like me are tired of begging for quarantine and other necessary actions; we are hopeless that any decisive action will be taken. Before it is too late, let’s pass an urgent bill to immediately close everything down in the country for a month, … to protect our countrymen from the deadly Coronavirus.”

At the same time, today, to conceal the actual dimensions of the spread of the virus, its fatalities, and regime’s incompetence, the clerical regime expelled the team of Doctors Without Borders, who had traveled to Iran in a group of nine specialists with two planeloads of equipment to set up a field hospital in Isfahan., Commenting on the matter, Alireza Vahabzadeh, regime’s Health Ministry’s advisor, shamelessly wrote, “By implementing the National Mobilization Plan against Coronavirus and the full use of the armed forces’ medical capacity, there is no need to use foreign forces.”

Mrs. Maryam Rajavi, the President-elect of the National Council of Resistance of Iran (NCRI), said: Expelling Doctors Without Borders, who had come to Isfahan with prior agreement and coordination demonstrates that the mullahs intend to continue their criminal cover-up, especially about the number of fatalities. This shows that the main problem in Iran is the corrupt dictatorship that does not think about anything but how to preserve its grip on power and that human lives are worthless. The regime wants to receive aid without any supervision so that it can put it at the disposal of the IRGC and regime officials.

Secretariat of the National Council of Resistance of Iran (NCRI)
March 24, 2020