Maryam Rajavi: We declare IWD 2020, the day of Women Martyred in the Iran Uprising in November 2019 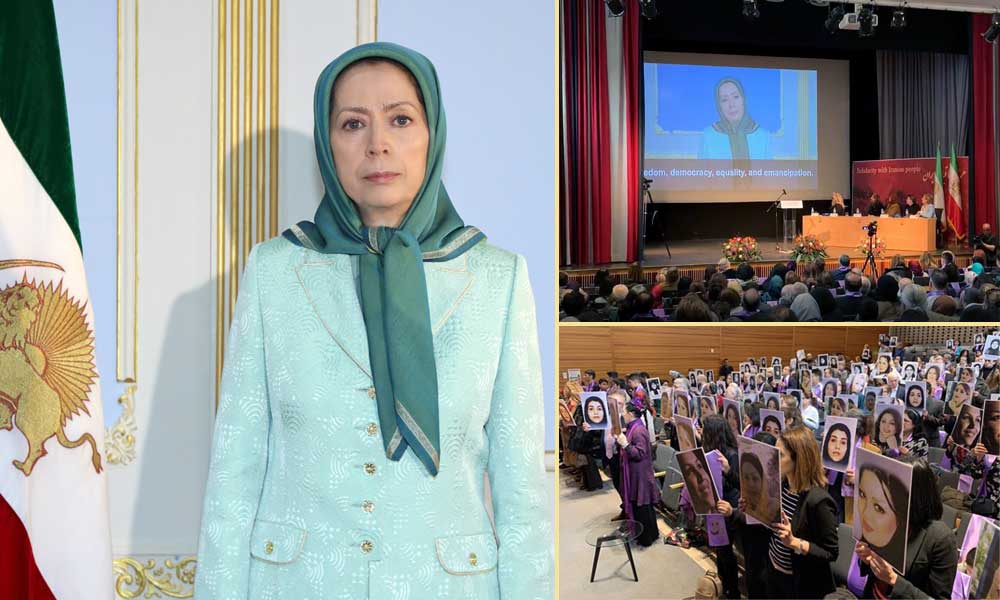 My dear friends and sisters,
Members of parliament and dignitaries advocating women’s rights,
On the eve of International Women’s Day, I offer my congratulation on this day, which marks women’s struggle, sacrifice, and suffering to build a world free from exploitation, oppression and violence.
This year, International Women’s Day has taken on more meaning with the heroism of the arisen women in Iran and the blood of women killed in the protests in November.
On behalf of the Iranian people and Resistance, and in the name of my martyred and captive sisters, I declare 2020 International Women’s Day as the Day of Women Martyred in the Iran Uprising in November 2019.

Is the essence of the International Women’s Day not to uproot women’s misfortune?
Is it not true that we must eradicate patriarchy, violence and exploitation of women?
Is it not true that we must eliminate misogyny?
Thus, International Women’s Day is the day of our martyred sisters who targeted the religious fascism ruling Iran, the embodiment of misogyny and religious tyranny.
This is Iranian women’s blood-drenched resolve to achieve freedom and equality, which heralds the definite downfall of the mullahs’ regime.

Since the 1980s, thousands of pioneering women, a vast majority from the PMOI, have died in the struggle against the clerical regime. Ashraf Rajavi led the way in this struggle.

During the difficult times in Ashraf, Iraq, PMOI women such as Zohreh Gha’emi, Giti Givehchian, Saba Haft-Baradaran, and Assiyeh Rakhshani offered their lives to keep aloft the flag of Iran’s freedom.

And today, in the ranks of Resistance Units and in the frontlines of the uprisings, courageous women of Iran are commanding the struggle to overthrow the mullahs’ misogynous tyranny.

Indeed, what better and clearer testament than such profound sense of responsibility and impact is needed to confirm the qualifications and competence of Iranian women.

The regime’s officials, commanders of Khamenei’s ruthless Revolutionary Guard Corps, and the state media have repeatedly spoken of the leading role of young women in the uprisings. They have acknowledged that these women were leaders of the gatherings and protests in November 2019 and January 2020. Yes, it is true.

The more significant truth, however, is that these vanguard women, who are at the forefront of the struggle for regime change, will ultimately bring down the religious fascism.
By relying on the selfless endeavors of their pioneers, the Iranian people are pursuing a plan to liberate Iran. This plan can be summarized in four words: Freedom, democracy, equality, and emancipation.

We are proud that selfless and valiant women –tens of thousands of whom have been tortured and martyred in the struggle against this regime– are the vanguards of the plan to free Iran. The women martyred during the bloody protests in November are a brilliant and outstanding manifestation of the price Iranian women have paid and are continuing to pay.

What do we really mean when we speak of the critical role played by our courageous sisters and daughters in the uprising in November?
Why did they take to the streets? Why did they sacrifice their lives?
Because the era of the mullahs’ misogynous tyranny has come to an end.
Because the era of compulsory religion, compulsory rule and compulsory veil is over.
Because stripping women of their rights and imposing numerous forms of gender, class and ethnic oppression on Iranian women must no longer continue.

Yes, the brave women of Iran have come to the scene not only for their own freedom, but for the freedom of Iran and Iranians. They have come to lead the struggle of Iranian society towards freedom, democracy and equality.

What they say and demand is that women from every nationality, religion, or social class must enjoy equal rights with men in all economic, social and political arenas.
The belief in a particular religion must not be the cause for humiliating or depriving women of access to job opportunities, educational resources or seeking justice.
In the post-mullahs Iran, women will be free to choose their attire. The law on compulsory veil will be abolished.
Polygamy and child marriage will be prohibited.
In the job market, women must enjoy equal opportunities and receive equal pay and benefits for equal work with men.

Women must particularly enjoy the right to equal participation in the country’s political leadership.
The unflinching resolve of the Iranian people, Resistance and arisen women will turn these prospects into reality.

The mullahs’ regime is besieged by mounting social protests. The Iranian people rejected Khamenei through their resounding NO to the mullahs’ most scandalous election farce.
And the inclusion of the regime in FATF’s blacklist has put the mullahs in a financial stranglehold.
Iraq, which Khamenei had declared as the regime’s strategic depth has seen the eruption of a major uprising against its Iranian-proxy rulers. The brave women of Iraq are also playing an important role in those protests.

Dear friends,
Under the mullahs’ rule, every natural calamity and every preventable problem from the Coronavirus (COVID-19) to floods to earthquakes, turn into a major disaster. The people of Iran and women in particular are the first victims of the mullahs’ depravity.

The Coronavirus is rapidly spreading on a massive scale all across the country. And the regime is repeating the bitter experience of the downing of the Ukrainian Airliner.
I urge all physicians, nurses and hospital staff to publicize their information quickly in order to save the lives of the Iranian people and to thwart the regime’s cover-up.
I especially call on the World Health Organization to document all the facts and figures on the extent of the Coronavirus in Iran and put it at the disposal of the public and relevant international organizations to save the lives of the people of Iran and other countries.

In conclusion, I hail the resistance of our courageous sisters and daughters in the ranks of Resistance Units. I hail the admirable perseverance of our female political prisoners. And I call on you, my dear sisters abroad, who are relentlessly working for the Iranian people’s freedom, to expand your efforts in support of the uprisings and Resistance Units. To this end,
1. Persistently urge international bodies, particularly organizations advocating women’s rights and human rights, to strongly condemn the regime’s massacre of more than 1,500 protesters, especially women protesters.
2. Urge the European Union, particularly the Government of Sweden, to pressure the regime to allow a fact-finding mission to visit Iran to investigate the conditions of women political prisoners.
3. Inspire governments to recognize the right of the Iranian people and youth to wage resistance against the Revolutionary Guards and other suppressive organs, and to recognize the Iranian people’s struggle for regime change and the establishment of freedom.
4. Wherever you are, as supporters of Resistance Units and uprisings in Iran, always think about what you can do to advance their struggle. And put the responsibility to support Resistance Units and to ensure the continuation of the uprisings on your shoulders, and move forward in step with the uprisings at all times.

Hail to you all
Victory to you