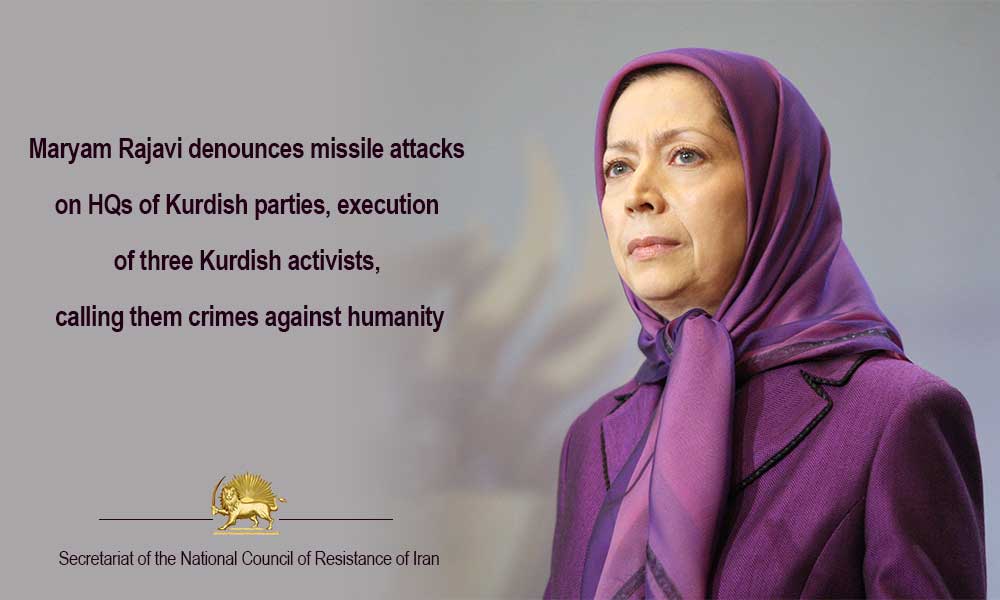 Faced with overwhelming popular outrage and detestation, the regime carried out the executions despite repeated international calls, to terrorize the public and prevent further anti-regime protests.
The three prisoners had been on dry hunger strike for several days. Zanyar and Loghman were in jail for more than nine years, and Ramin had been imprisoned over the past 14 months. They were under severe duress during their incarceration.

The Iranian Resistance has repeatedly called, including yesterday, on the UN Security Council and its member states, to take urgent action to prevent these arbitrary executions in blatant contradiction to recognized international norms.

Run by Mohsen Rezaii, former IRGC Commander and Secretary of the State Exigency Council, Tabnak website wrote a few hours after this criminal attack, “The forces of the Revolutionary Guard Corps… have targeted since this morning, Saturday (September 8), the military positions… of the Kurdistan Democratic Party of Iran and the Democratic Party near the city of Kouyeh, 200 kms from the Iranian border.”

Tabnak added, “The IRGC launched six surface-to-surface missiles at the headquarters of the Kurdistan Democratic Party which left dozens dead and wounded.”

The President of the Council of Ministers of the Kurdistan Region of Iraq issued a statement condemning the strikes at the headquarters of both parties “by the Islamic Republic of Iran which lead to a number of deaths and casualties.”

Maryam Rajavi called on the people of Kurdistan and across Iran to rise and protest against the Iranian regime. “The mullahs’ anti-human regime is hell-bent on stepping up the atmosphere of terror and repression to extinguish the Iranian people’s uprising through suppression, executions, bombardment and missile attacks. But it will take that wish to the grave,” she said.

Secretariat of the National Council of Resistance of Iran
September 8, 2018