Maryam Rajavi: Elimination of Qassem Soleimani and head of Iraq’s suppressive Bassij force is irreparable blow to mullahs’ regime; Time to evict IRGC from the region 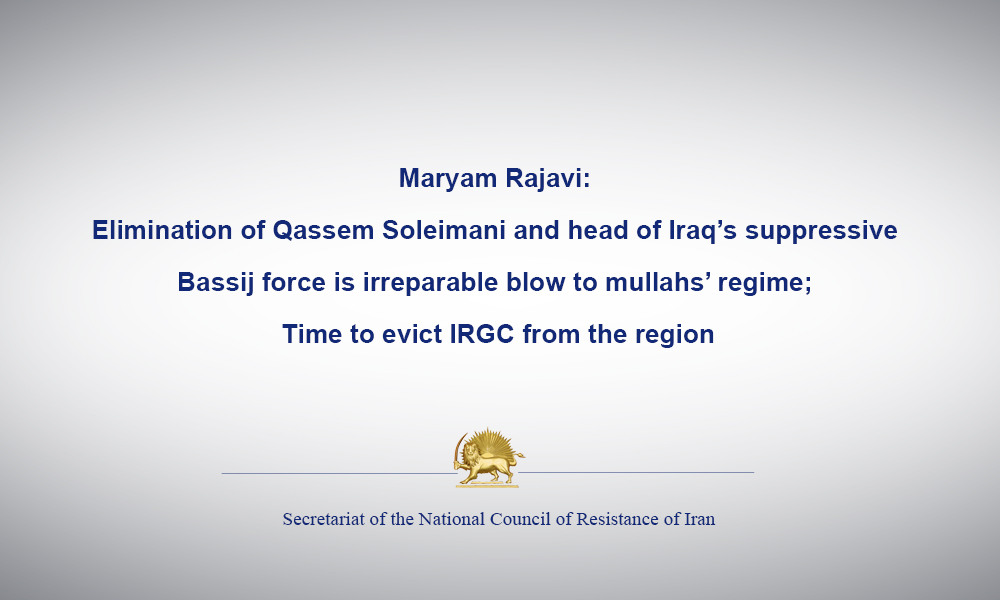 Mrs. Maryam Rajavi, the President-elect of the National Council of Resistance of Iran (NCRI), described the elimination of Qassem Soleimani and Abu Mehdi Muhandes, the head of Iraq’s suppressive Bassij force, as an irreparable blow to the clerical regime. Mrs. Rajavi emphasized that the time had come to evict the mullahs from the region, especially from Iraq, Syria and Lebanon, and expel the IRGC from these countries. In this way, Iraq, which had been delivered by the United States to the clerical regime on a silver platter, will be liberated from the yoke of the religious fascism ruling Iran.

Qassem Soleimani was one of the most vicious criminals of Iran’s history. He was personally involved in the massacre of hundreds of thousands of people in the region and in driving millions of others from their homes. He was also the mastermind of the massacre of the Mujahedin-e Khalq (PMOI/MEK) in Camp Ashraf in Iraq, and of many other terrorist operations against the Iranian Resistance in that country, in Iran, and in other countries. With his elimination, the process of overthrowing the mullahs will be greatly expedited.

Moreover, with the death of the criminal Abu Mehdi Muhandes, the head of Iranian regime’s proxy Bassij force in Iraq and a notorious murderer, whose crimes had been exposed by the Iranian Resistance since two decades ago, the time has come for the victory of the Iraqi people’s uprising and the liberation of Iraq from the Iranian regime’s occupation.

Mrs. Rajavi added: While the prospects for the ruling theocracy’s overthrow is within reach, it is time for the regime’s armed forces to refrain from firing on the Iranian people, lay down their weapons and surrender. The armed forces’ patriotic personnel must join the people of Iran.

Recalling the martyrdom of at least 1,500 children of the Iranian people and endless arrests during the November 2019 uprising, Mrs. Rajavi underscored: The international community, especially the European Union, must end the policy of appeasement and recognize the right of the Iranian people to resist and rise for freedom to replace popular sovereignty in place of the mullahs’ rule.

Secretariat of the National Council of Resistance of Iran
January 3, 2020