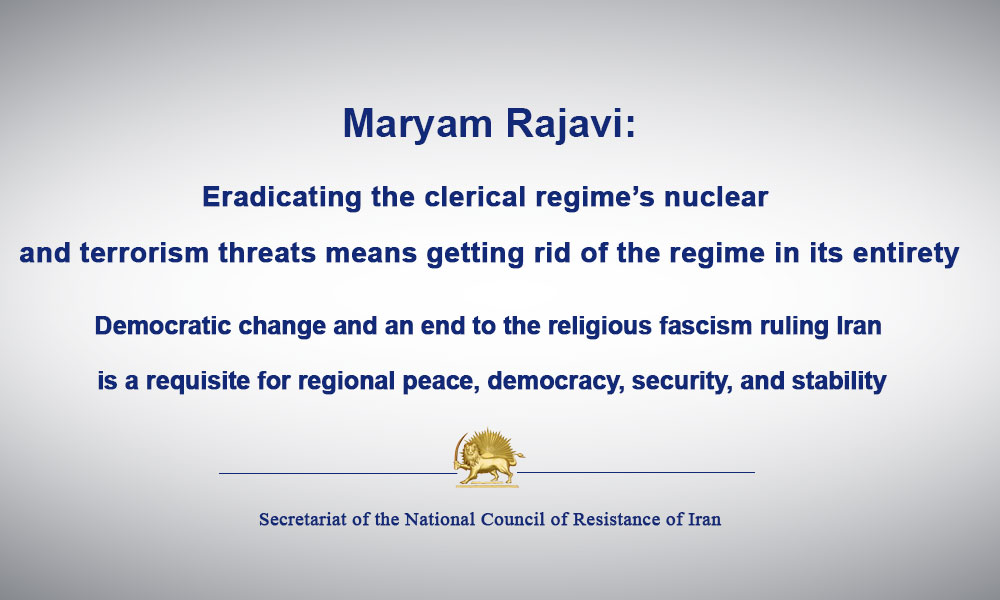 After several decades of appeasing the religious fascism ruling Iran and victimizing the Iranian people and Resistance, and simultaneous with the U.S. withdrawal from the Iran nuclear deal (the Joint Comprehensive Plan of Action – JCPOA), the President of the United States declared that the lavish payments to the clerical regime by the previous U.S. administration had been disastrous, adding that the sinister regime ruling Iran, the leading state sponsor of terror in the world today, “has funded its long reign of chaos and terror by plundering the wealth of its own people.”

Speaking on behalf of the Iranian Resistance, which first revealed the Iranian regime’s secret nuclear program and facilities and has been the flag bearer of a non-nuclear Iran, Maryam Rajavi said, “Eradicating the clerical regime’s nuclear and terrorism threats means getting rid of the regime in its entirety. A regime based on the principle of velayat-e faqih (absolute rule of the clergy) cannot exist without terrorism, suppression, and weapons of mass destruction.”

“As in the past, any future investment in this regime is doomed to failure. As the Iranian Resistance has persistently declared, standing with the criminal mullahs, and empowering those responsible for, and the perpetrators of, the massacre of the Iranian people’s valiant children, will only embolden the religious fascists’ warmongering, export of fundamentalism and terrorism,” she emphasized.

Rajavi added, “As the nationwide uprising in December and January demonstrated, the Iranian people want to be liberated from religious oppression and despotism. Democratic change in Iran is inevitable and a free Iran is within reach. The end of religious dictatorship in Iran is a requisite for regional peace, democracy, security, and stability. This is the only way to end war and crisis in the region and avert a larger war.”

“The United Nations Security Council must take up and refer to an international tribunal the dossier on the leaders of the Iranian regime’s terrorism and countless crimes against the Iranian people, especially the massacre of political prisoners,” she underscored.

Secretariat of the National Council of Resistance of Iran
May 8, 2018