Maryam Rajavi: Europe must end its silence and inaction over Iranian regime’s crimes 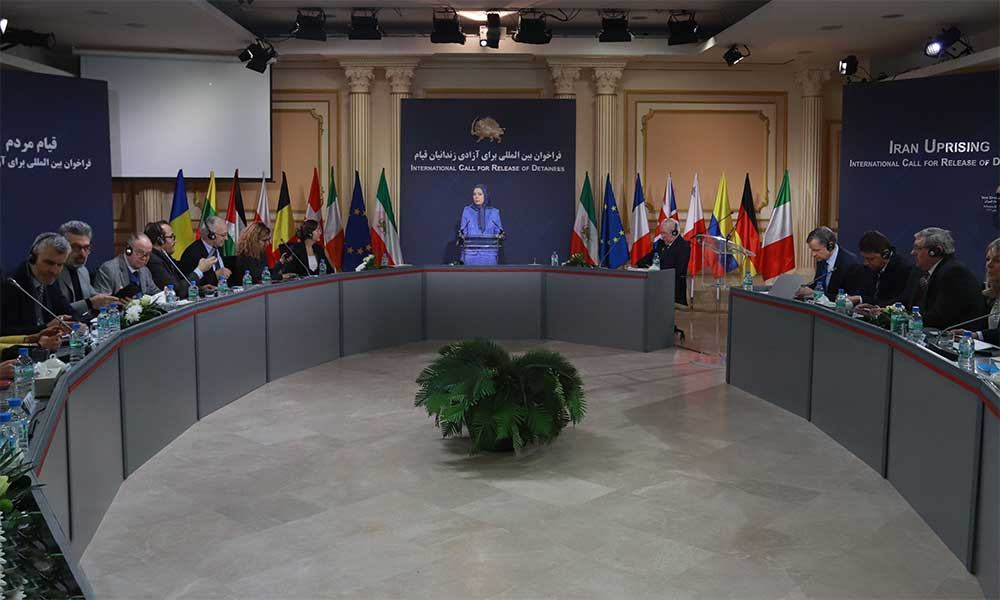 Friday, February 9, 2018, a meeting was held in Auvers-sur-Oise entitled, Iranian people’s uprising, and international call for freedom of prisoners of the uprising. Maryam Rajavi and a number of European MPs from UK, Ireland, Italy, Germany, Malta, Lithuania, Switzerland and Poland participated. Addressing the participating MPs and personalities, Maryam Rajavi said:

Honorable representatives,
Distinguished guests,
Welcome to the home of the Iranian Resistance. I am glad to see you here and have the opportunity to discuss with you the changing circumstances in Iran. The conditions in Iran are constantly changing and I would like to focus on four issues, today. Then, I would be more than glad to hear your views. These four issues are:
– The uprising was a turning point in Iranian developments;
– Evaluation of the regime’s status in confronting the uprising;
– The role of the Iranian Resistance in the developments and guaranteeing stability, peace and security;
– And finally, the right Europe policy on Iran.

We believe the uprising was a turning point. This means that the conditions will never go back to the previous state. What happened in Iran was beyond some protest demonstrations over economic problems, but a nationwide movement against the clerical regime in its entirety. The uprising bore several prominent features:

The first feature was the span and rapid expansion of the protests. In a few days, the protests spread to 142 cities.

The second feature is that these protests were based on the regime’s total failure in resolving the most basic problems in the society, including unemployment, high prices, in step with social and political suppression. The reality is that financial, political and judicial corruption has engulfed the regime. Its policy of intervention in the region has run into a deadlock and exhausted its resources. Its adverse consequences are already felt inside the country. The important point to note here is that this fundamental reason is still in place and further aggravated and the regime does not have the power to solve it.

The only way to deal with these crises is serious political change which the regime is not able to undertake.

Third, the driving force of the protests was made up of women and the social sectors that the regime used to claim, and some in the West believed, were its power base. Namely the deprived sectors who are tired of the regime’s oppression. Both the deprived masses and women, have suffered enormously from oppression and discrimination. They do not have anything to lose and they are prepared to pay the price and stand up to the regime.

The video clips coming from Iran show that women are at the forefront in many scenes.

Last week, an IRGC deputy commander clearly said that women, particularly the PMOI women, led the protests in many cities.

Indeed, women have borne the brunt of repression in the 39 years of the mullahs’ rule. The compulsory veil, as well as subjugation and humiliation of women for failing to observe the veil, are among the most important means for the regime to impose repression on society. The People’s Mojahedin Organization of Iran has reiterated since the first day, that compulsory religion, religious coercions and the compulsory veil blatantly contradict the true teachings of Islam.

State polls conducted in several years ago have been just recently divulged, according to which the greater majority of Iranian women oppose the compulsory veil. This is an indication of Iranian women’s fury and hate towards the clerical regime. In fact, women make up an explosive force and a powerful potential for rising up against the regime and overthrowing it.

The fourth feature in this uprising was that the slogans and chants like “death to Khamenei”, “death to Rouhani,” and “reformists, hardliners, beware that the game is over” targeted the regime in its entirety.

The fifth important feature of these protests was that they were organized. The fact that they spread to 142 cities with similar slogans was not and could not be just a coincidence. The people’s chants reflected the demands the Iranian Resistance has been struggling for, for years. The mullahs’ supreme leader, Khamenei, formally announced that the PMOI had organized the protests and they had planned for them since months ago.

Rouhani called the French President and said the PMOI was behind the recent incidents in Iran and asked him to restrict the activities of the Iranian Resistance. A deputy commander of the IRGC also said, “the ring leaders in these riots were from the PMOI.”

Honorable guests,
We believe that despite any ups and down, the protests and the uprising will continue. Of course, the regime has so far demonstrated that it will make its best effort to clamp down on the protests. So far, 50 people have been killed, thirteen of whom died under torture. More than 8,000 people were arrested during the uprising.

A few days ago, a member of the mullahs’ parliament cited the head of the Prisons Organization and said that they had registered 4,972 arrests. The mere verification of this figure indicates that the true figures are much higher than 8,000.

Nevertheless, the regime is not powerful enough to stop the protests. Of course, there will be ups and downs, but there will not be any stops. As you might have noticed, after two weeks of relative calm, again various Iranian cities were scenes of protests on January 31 and February 1, with the similar slogans that denied the regime in its entirety.

At the same time, protests by workers, toilers and plundered people take place every day.

Dear friends,
The Iranian regime is in a weaker position than any other time. There are signs of alarm and concern even inside the IRGC and Bassij militia, on which the regime relies for its survival.

A number of members of Bassij burned their membership cards during the days of the uprising and joined the protesters.

Some of the people killed by the regime’s forces during the protests were from Bassiji families. The clerical regime’s power to dispatch its IRGC forces to Syria has drastically diminished and for this reason, it basically relies on non-Iranian mercenary forces from other countries.

In a word, the factors that led to the uprising are still in force and even aggravated.

The wall of fear has been cracked, and nothing including arrests, killings and torture can prevent the advancement of the protests to overthrow the regime. The clerical regime is doomed to go and the Iranian Resistance guarantees a free Iran and tranquility and stability for the region.

I pointed to the admissions made by the regime’s leaders on the role of the PMOI in the uprising. But the role of the Resistance is much deeper. In reality, there is a democratic alternative in Iran with a broad popular base and capable of bringing change to the country. It is able to offer plans and specific structures for future Iran. This is why the regime so greatly fears it.

The regime and its lobbies try to scare the people of Iran and the International Community from the eruption of an internal conflict and a repeat of the Syrian scenario in Iran. In this way, they seek to contribute to the regime’s survival. The reality, however, is that the presence of this powerful, deeply-rooted alternative actually guarantees a united and sovereign Iran.

The mullahs and their lobbies conceal the fact that the clerical regime is the main cause of crisis and killings in Syria. They are concealing the fact that when the uprising climaxes and overthrows the mullahs, not only Iran will not become another Syria, but the crises in Syria and Iraq and other countries in the region will be replaced by peace, tranquility and democracy.

We seek a free and democratic Iran, separation of religion and state, equal rights for all ethnic groups and their autonomy in the framework of Iran’s territorial integrity, gender equality, and the abolition of the compulsory veil and all the medieval laws against women.

And finally, the question is what is the right policy for Europe?
During my visit to the Council of Europe in Strasbourg on January 24, I called on the Council of Europe, the European Union and its member states to adopt effective measures and binding decisions to compel the religious fascist regime ruling Iran to free the prisoners of the uprising, guarantee freedom of speech and assembly, and put an end to the suppression of women and abolish the compulsory veil.

Any destabilization of the region, based on recent experiences, will also put pressure on Europe by terrorist attacks.

This is what we say: 39 years of bloodshed and crimes, discrimination against and suppression of women, repression and censorship is enough. Europe must end its silence and inaction and distance itself from the clerical regime.

This regime has no future and appeasing it will only increase the price of freedom for the people of Iran. Appeasement will fuel more wars and crises in the region but of course, it cannot prevent the overthrow of the clerical regime by the people of Iran, just as the all-out support of the US and western countries up to the last months of the Shah’s rule, could not prevent his overthrow.

I thank you all very much and will be glad to hear you. 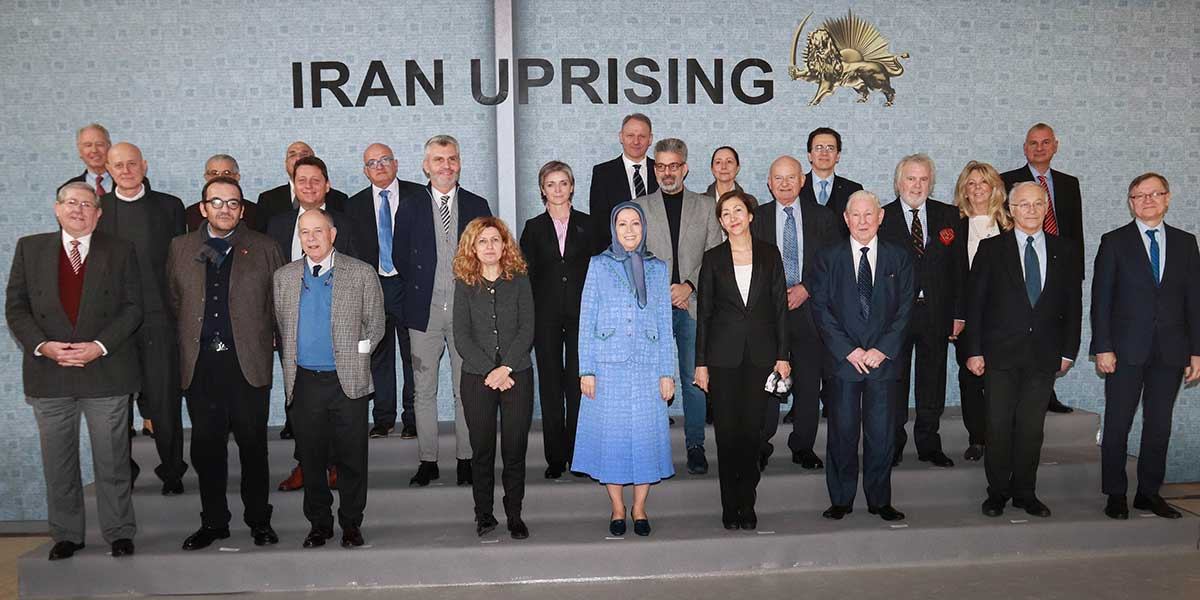