Maryam Rajavi: Freedom in Iran, the solution to crisis and instability in the Middle East 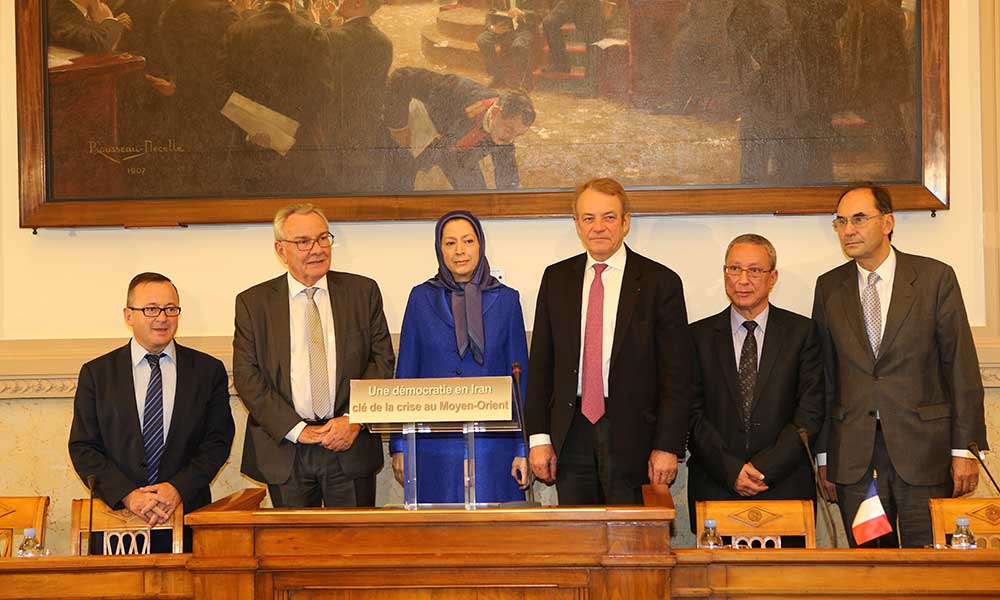 Greetings to you all. I would like to express my appreciation on the efforts of the Parliamentary Committee for a Democratic Iran for sponsoring this conference.

Developments both in Iran and the region in the past year proved the value of the Committee’s initiatives in keeping the focus on the question of Iran.

Today, I will concentrate on the critical significance of the Iranian people’s human rights and freedoms in the formulation of policy on Iran and the Middle East.

The fact is that domestic suppression at home and exporting terrorism beyond Iran’s borders constitute the two pillars, upon which the regime has relied to preserve its rule.

As we speak, mullahs are brutally suppressing the Iranian people. This can be seen particularly in the mass and arbitrary executions described by Amnesty International as “a sinister picture of the machinery of the state carrying out premeditated, judicially-sanctioned killings on a mass scale.”

The average number of executions under Rouhani stands at approximately 1,000 each year, the highest number in the past quarter century. In addition, there are several thousand more victims on the death row in various prisons across Iran. These executions point to the regime’s instability. The regime’s paranoia over concerts and theatrical performances reflects its fragility as much as its imprisoning of young bloggers, poets, cartoonists, journalists and filmmakers reveals its instability.

Regrettably, Western governments have adopted a wrongheaded policy vis-à-vis the clerical regime due, in large measure, to their economic interests and Tehran’s propaganda and blackmail. This policy suffers from three fundamental flaws.

First, the perception that the mullahs perpetrate terrorism, genocide, and warmongering from a position of power.

Second, the perception that this regime, which is the very source of instability and insecurity, could be counted on as a partner for regional security.

Third, turning a blind eye on who and what constitute the actors for change in Iran.

The July 14 nuclear agreement was undoubtedly a watershed moment. Nevertheless, if the regime were negotiating from the position of strength, it would have never agreed to the nuclear deal because the nuclear weapons program has always been a hallmark of its power.

According to Iranian regime’s official news agency yesterday, Hashemi Rafsanjani, the regime’s number two official from day one, admitted that Tehran had started the nuclear program with the aim of manufacturing a bomb and that it had never abandoned this goal, adding that he and Supreme Leader Ali Khamenei had personally pursued this matter.

As such, the regime was compelled to accept the agreement reluctantly. The nuclear deal has already undermined the regime in its entirety, forcing it into a dilemma, which forced Khamenei to approve it last week, but, at the same time, leaving himself some leeway to circumvent it.

In the post-deal environment, the regime is unable to institute any form of reform. To the contrary, it has to compensate for its partial retreat by becoming more aggressive and belligerent. When Khatami became president in 1997, some people propagated the illusion that the ruling religious dictatorship could reform itself. Those expectations, however, did not pan out.

Now the same ill-fated attempt is being repeated about Rouhani. This fanatical regime cannot transform itself. In the words of Voltaire, “Fanaticism is a monster that pretends to be the child of religion.”

In recent months, the mullahs have stepped up human rights violations in Iran. In a blatant attempt to create a crisis, they test fired a ballistic missile capable of carrying nuclear warheads. The mullahs’ leader, Khamenei, reiterated the fatwa to murder Salman Rushdie.

In Syria, the mullahs expanded their warmongering and carnage, and when they suffered a major defeat, they jointly conspired with Russia to facilitate Moscow’s involvement. The Iranian regime’s meddling in Syria has had three catastrophic consequences so far:

It led to the emergence and expansion of ISIS, incited terrorist attacks in Europe such as the Charlie Hebdo assassinations, and it has now brought about a colossal social crisis with two million refugees fleeing to Europe, creating an unprecedented humanitarian crisis.

This is while the solution lies in the eviction of the Iranian Revolutionary Guards Corps (IRGC) from Syria and providing material support to the moderate Syrian opposition. As President François Hollande recently said at the UN General assembly, the solution is a Syria without Bashar al-Assad.

Consequences of partnering with the Iranian regime

Those advocating cooperation with the Iranian regime fail to consider the experience of Syria, Iraq and Yemen. If it were not for the Iranian regime’s direct support for Bashar al-Assad, there would not have been a refugee crisis, nor would have 300,000 Syrians been killed. If it were not for the mullahs’ support for Iraq’s former Prime Minister Nouri al-Maliki and his criminal policies, there would have been no opportunity for the ISIS to grow and expand.

In the past 16 months, the Iranian regime has continued to pursue its criminal interference in Iraq under the false pretext of countering the ISIS. Unfortunately, the US Government has in effect gone along with that policy.

Instead of fighting ISIS, however, the mullahs have suppressed the people of Iraq and in marginalized the Sunnis.

Economic cooperation with the Iranian regime also poses a major challenge. The Iranian people and merchants are interested in scientific, cultural, economic and technologic exchanges with France. The problem, however, is the domination of the country’s economy by the mullahs’ Supreme Leader and the Revolutionary Guards Corps. They control over half to two-thirds of the GNP. Consequently, companies that belong to Khamenei and the IRGC would be parties to most of the contracts. Thus, such transactions only fuel the regime’s machinery of war and repression.

The Middle East is in dire need of peace, stability and democracy. This would be possible only through regime change in Iran.

Nothing terrifies the ruling mullahs more than domestic discontent and the Iranian people’s organized resistance. They saw how the 2009 uprisings pushed their regime to the brink of collapse.

After the nuclear agreement, the inhumane siege of PMOI members in Camp Liberty, Iraq has persisted. The regime continues to take agents of the Ministry of Intelligence and the Qods Force to Camp Liberty as part of a campaign of psychological torture of the residents. The medical blockade remains and the residents’ property is being plundered while they are denied the right to the ownership of their property.

Regrettably, Western governments’ relations with the regime, especially their disregard for the Iranian people’s human rights and freedoms as well as their breach of commitments to the residents of Camp Liberty, have been to the detriment of change by the Iranian people and Resistance.

Two weeks ago, Iranian political prisoners sent an open letter to European governments. They wrote, “The life and security of human beings are worthless in Iran. How could a regime that has no mercy on its own people be of help in resolving the problems of other nations?”

“Partnering with the Iranian regime in regional security is bewildering because the Tehran is the source of the problems in the region and the Godfather of terrorism,” they added.

I must also point out to unrelenting demonstrations by teachers, workers and other segments of Iranian society, which reflect the desire and readiness of the Iranian society for change.

In such circumstances, engagement with the religious fascism ruling Iran and its president is against democracy and human rights in Iran and encourages further executions. It also undermines peace and tranquility in the region and fuels terrorism as well as Shiite and Sunni extremism.

Needless to say, long-term economic investment in this decaying and faltering regime is nothing but a mirage.

We expect the international community, particularly the European Union, to predicate their relations with the Iranian regime on an end to executions in Iran. They should also pressure the clerical regime to release political prisoners.

And we expect the United States and the European Union to fulfill their commitments and pledges to protect Camp Liberty residents. It is time to put an end to the insecurity and siege of this Camp, especially the medical blockade.

And finally, it is necessary that Western governments respect the Iranian people’s resistance for freedom.

The crux of the matter is the freedom of the Iranian people. As the Marseillaise says, “Freedom, o’ freedom.” This is the key to resolving the Iranian crisis and to confronting instability in the region.