Maryam Rajavi: French FM’s stress on withdrawal of the mullahs’ militia is the best solution to end crisis in Syria 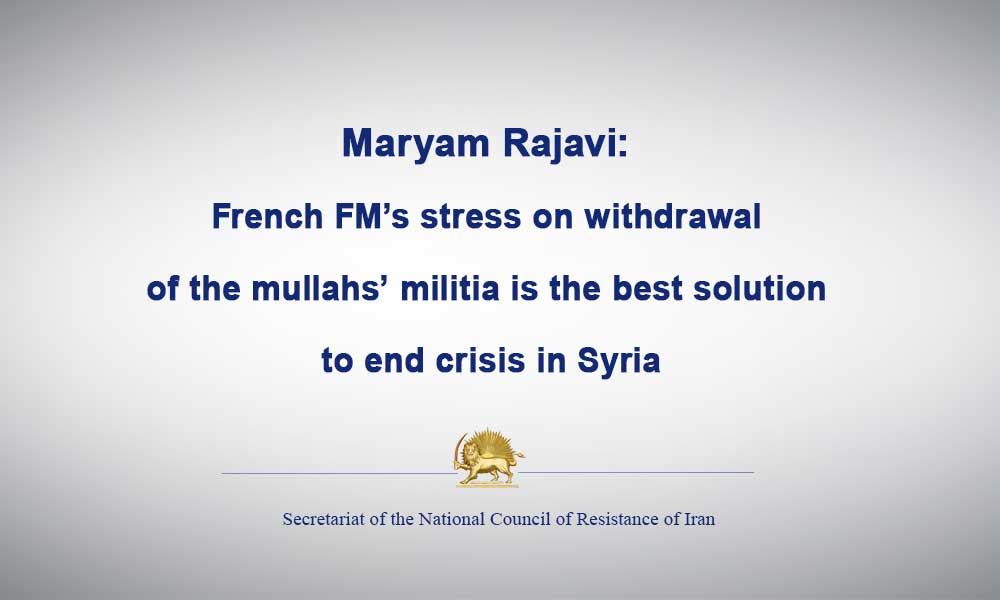 Maryam Rajavi, said in this regard, “The Foreign Minister of France offered the best solution for peace and tranquility, to end ‘chaos’ in Syria and the region.”

“Eviction of the Revolutionary Guard Corps (IRGC) with its missiles and mercenaries from Syria, Lebanon, Yemen and Iraq is the only way to end the crisis in the Middle East,” she added.

Expulsion of the Revolutionary Guard Corps and its mercenaries from Syria is the demand of the general public in Iran who chanted in their recent protests in December and January in 142 cities, “Leave Syria alone, think of us.”

The dictator of Syria would have been overthrown years ago, if it were not for the unsparing support of the mullahs and the involvement and engagement of the IRGC and its hirelings in this war and deadly crisis. Khamenei and other leading figures of the regime have repeatedly stressed that the regime’s security depends on their presence in Syria and Iraq, and if they had not fought in those countries, they had had to fight in cities inside Iran.

The time has come for the International Community, particularly the UN Security Council, to adopt the necessary measures to expel the clerical regime’s IRGC and its militia from the region and especially from Syria. This is an indispensable prerequisite to regional and global peace and security.

Secretariat of the National Council of Resistance of Iran
February 7, 2018