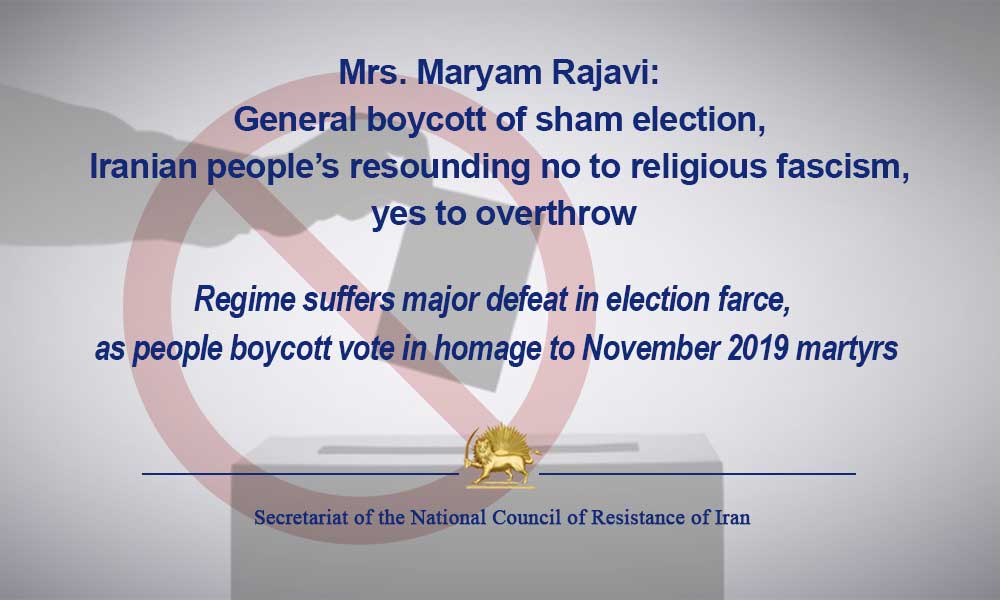 Mrs. Maryam Rajavi, the President-elect of the National Council of Resistance of Iran (NCRI), congratulated the Iranian people for the nationwide boycott of the sham election by the ruling religious fascism. Mrs. Rajavi added that the failure of the regime to intimidate people to go to the polls reflects the Iranian people’s homage to the 1,500 martyrs of the November 2019 uprising and portends of subsequent uprisings. This unprecedented boycott was a resounding “no” to Khamenei, Rouhani and the entirety of the clerical regime and showed the public’s enthusiasm for Resistance units’ slogan of “my vote is overthrow.”

Khamenei had ridiculously demanded that people vote as a religious duty. Rouhani had repeatedly appealed for voting. His advisors had warned people not to snub the ballot box, as it would make America happy and increase Mujahedin-e Khalq (PMOI/MEK) activities. The IRGC and Javad Zarif’s had called to defeat the policy of maximum pressure with maximum participation. Not only did all these futile attempts fail to have any impact, but to the contrary, intensified the people’s disgust at the theft of popular sovereignty through this illegitimate election and strengthened their resolve to boycott this charade.

The nationwide boycott of the election farce will aggravate the regime’s internal feuding and deadly impasse and expedite its overthrow by the Iranian people and Resistance. Shaking the bloody hands of this illegitimate regime must stop at the international level. The world community must recognize the right of the Iranian people and Resistance to change the clerical regime and establish democracy and people’s sovereignty.

Secretariat of the National Council of Resistance of Iran
February 21, 2020