Maryam Rajavi: Granting immunity to the perpetrators of the 1988 massacre must not continue 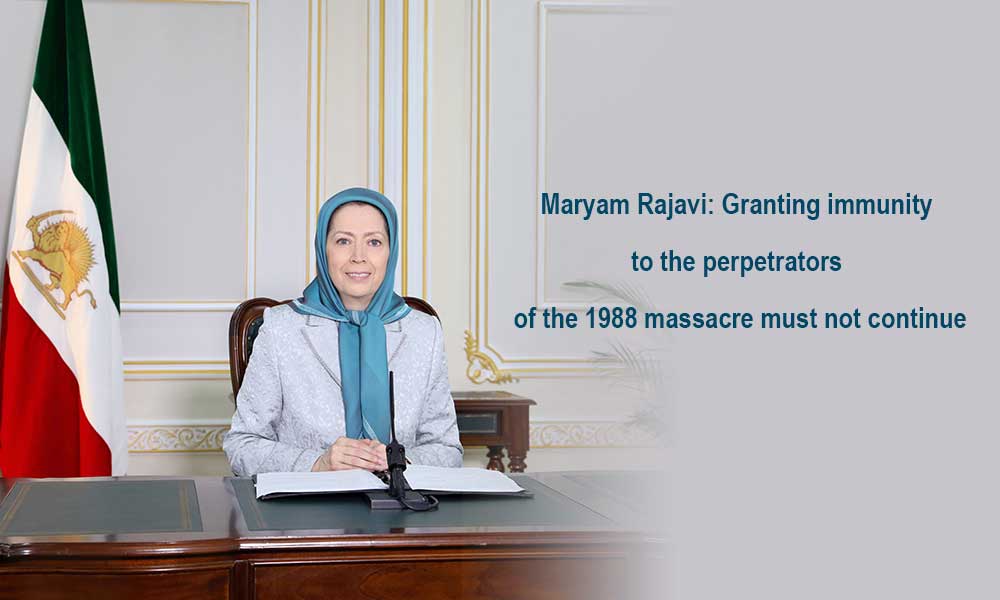 Mr. Legaret, the Hon. Mayor of Paris District 1,
Dear friends of the Iranian Resistance,
I salute you and I would like to thank you for your support for the Iranian people’s resistance for freedom and democracy.

In 1988, Khomeini, the founder of the mullahs’ religious dictatorship, penned the fatwa ordering the massacre of political prisoners.
He ordered the execution of every prisoner who remained loyal to the PMOI. The majority of them were serving and some of them had already finished serving their prison sentences. Khomeini’s death decree triggered a wave of killings in prisons across Iran to the extent that virtually no prisoner remained in any of the wards. But this was not enough for Khomeini. He ordered the re-arrest of throngs of PMOI supporters who had been previously released from prison. These arrestees were also swiftly executed.

31 years on, the perpetrators of this massacre continue to be among the highest officials of the Iranian regime. In recent months, Khamenei appointed one of the principal executioners involved in the 1988 massacre as head of the Judiciary. Another executioner is Rouhani’s Minister of Justice.
The regime also continues to refuse giving information on the victims of the 1988 massacre and the families of those massacred are still being persecuted. Despite passage of 31 years, they still do not know where their loved ones are buried.
Just last month, Mostafa Pour Mohammadi, one of the key members of the Death Commissions carrying out the 1988 massacre, said, “The PMOI have desecrated the (regime’s) image throughout the world… Now is the time to fight the PMOI… The PMOI are the most treacherous enemies of this nation and they must be dealt with one by one.”

In fact, Khomeini’s heirs have inherited his nightmare about the force capable of overthrowing the regime. This is why they are actively pursuing the same policy of manslaughter and massacre.
Last year, for example, the mullahs had planned to bomb the Iranian Resistance’s annual gathering in Villepinte. Fortunately, their plan failed and the regime’s diplomat who had handed the bomb to the mercenary agents is imprisoned in Belgium. This incident proved that the regime is still pursuing Khomeini’s evil intentions and the policy of massacring their opponents.
On the international level, this policy amounts to meddling in the region, warmongering, massacre of the people of Syria, attacks on oil tankers, jeopardizing the safety of international waters, terrorism, and hostage-taking.

Now, what is the solution and what is the proper approach to this regime?
The solution lies in the hands of the Iranian people and Resistance who seek the overthrow of this dictatorship. The international community will also have to recognize the desire of the Iranian people and Resistance if they want to get rid of the epicentre of fundamentalism and terrorism in the world.
They must not grant concessions to the mullahs. They must not shake hands with the perpetrators of the 1988 massacre.
These relations are not only morally reprehensible, but are politically wrong because they encourage and embolden the mullahs in blackmailing, hostage taking and terrorism.
Then, in return for massive concessions granted by the West, they take only one step back. In this way, European governments are not only hurting themselves but are putting global peace and security at risk.
Where did the regime’s nuclear program, missile program, warmongering and terrorism come from to threaten the world?
These are all consequences of appeasement of the mullahs. This policy which must no longer continue. The same is true about giving immunity to the perpetrators of the 1988 massacre as part of the policy of appeasement, which must also be stopped.

Dear friends,
In a report published in December 2018, Amnesty International examined the 1988 massacre in Iran. It wrote, “Iran is facing a crisis of impunity… The succession of atrocities in Iran is intractably linked to the impunity that has been enjoyed by the Iranian authorities.”
The time has come for the international community to end three decades of impunity for the clerical regime’s leaders in accounting for their crimes.
The dossier of human rights violations in Iran, particularly the massacre in 1988, must be referred to the UN Security Council.
Khamenei and other leaders of the Iranian regime must face justice for committing crimes against humanity.
The United Nations must launch an international mission to investigate the 1988 massacre in Iran.
And the world must recognize the Iranian people’s right to resist and fight for the overthrow of the ruling religious fascism.

Dear friends,
By courageously standing on the side of the Iranian people in their struggle for human rights, freedom and democracy, you have become a true epitome of friendship between the peoples of France and Iran.
I thank you all very much.