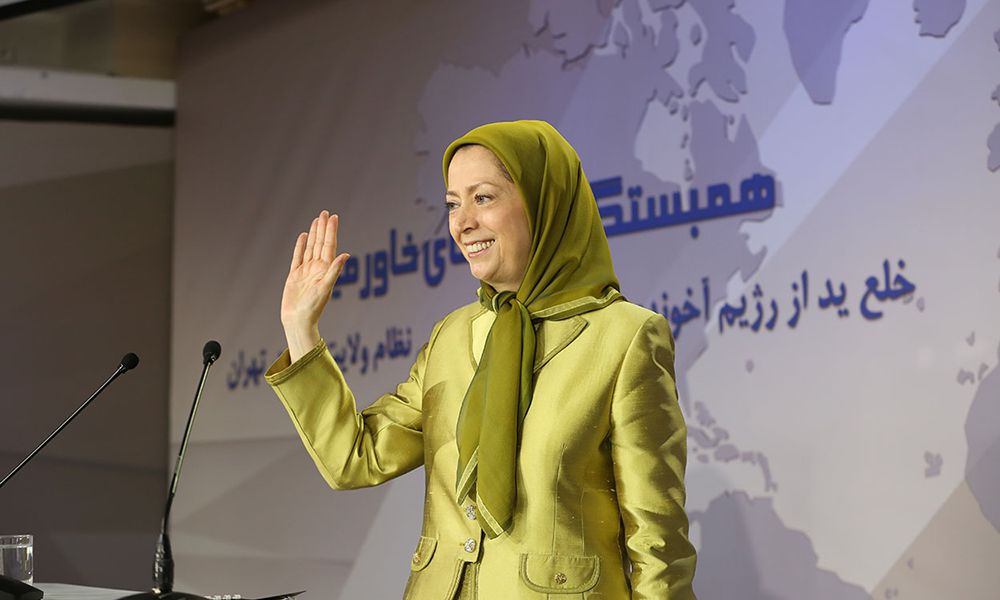 Middle East Nations Solidarity, the Only Way to Crush the Velayat-e Faqih Regime and Expel It from the Region, was the name of a meeting held Sunday, July 10, 2016, with Arab personalities and parliamentary delegations from the region participating.
In her address to this meeting, Maryam Rajavi said:

I would like to congratulate you all on Eid-al Fitr. I hope that the advent of the true Eid of all nations of the region would be soon; a feast of emancipation when all the nations of the region are liberated from occupation and belligerence.
I especially congratulate the people of Syria and their brave combatants on this occasion, to the courageous people of Darayaa, Homs, Aleppo, Deir az-Zor and other cities who have remained steadfast, to the determined and selfless Syrians who have never doubted even for a moment their resolve to overcome Bashar Assad and Khamenei despite suffering under a cruel siege. This Eid and this feast belongs to those who resist and heralds the heroes’ ultimate victory.
First of all, I would like to thank you for participating in the gathering yesterday. Arab delegations put up a strong show of unity against the religious dictatorship in Iran by their amazing presence. The religious dictatorship is the main enemy of all nations in the region. I particularly express gratitude to the high-ranking delegation of Egypt that delivered Egypt’s message of friendship and solidarity to the people of Iran.
The hearts of Muslims the world over are bleeding because of the unprecedented aggression against the Prophet’s Mosque in Medina. The devastating carnage of hundreds of innocent people in Baghdad in a recent bombing has once again highlighted the tragedy of terrorism and extremism under the name of Islam.
Please allow me to devote my speech today to the common pain and suffering of all the countries in the region. This suffering results from the export of fundamentalism, formation of paramilitary groups, and fomenting of war, and in a word the aggressions of the religious dictatorship ruling Iran.
This is a bitter story already fully experienced by Iraq, Syria, Yemen and Lebanon and has gradually extended to other countries in the region. What makes such fundamentalism and occupation more destructive is the fact that the greater part of its fuel and human force is provided by the paramilitary groups and militias formed in the same countries.
Dozens of Iraqi paramilitary militias, the Hezbollah of Lebanon, forces from Afghanistan, Pakistan, Yemen, etc. fuel a war which the Iranian regime has imposed on Arab and Islamic countries by violating their national sovereignty.
The mullahs brazenly say that they have dominated four capitals in the Arab world. They say that Syria is their 35th province of Iran. This means that they consider Iraq, Yemen and Lebanon as their 32nd, 33rd, and 34th provinces. At the same time, they are threatening other neighboring countries such as Bahrain.
Even in countries that do not have a considerable population of Shiites, the Iranian regime has been fomenting sectarian differences and dispatching units of the Quds Force to recruit more Shiites. This policy has even extended to Nigeria where the regime has formed another group akin to Hezbollah. More recently, they have attempted to implement the same sinister plan in Algeria by their Iraqi proxies.
In the meantime, these aggressions and invasions violate the United Nations Charter and the treaty of the Organization of Islamic Cooperation (OIC).
Another calamity the clerical regime has inflicted on the region is the phenomenon called Daesh (ISIS/ISIL) which is the product of the suppression of the peoples of Iraq and Syria by Maliki and Bashar Assad, respectively, under Khamenei’s direct supervision. Despite some tactical and provisional differences with the Iranian regime, Daesh (ISIS/ISIL) promotes the same political and theoretical foundations that Tehran’s religious dictatorship has offered since 1979. In practice, too, it has been proven that the Iranian regime and its mercenaries coordinate and cooperate with Daesh (ISIS/ISIL).

There are those who propose that the people of the Middle East have to choose between Daesh (ISIS/ISIL) and the Iranian regime. They are actually the mullahs’ spin doctors. They seek to preserve the mullahs’ status quo in Iraq and Syria despite its vulnerability. The opposite is also true. The moment this regime crumbles, there is not going to be any place left for Daesh (ISIS/ISIL) and other terrorists operating under the name of Islam because the peoples of the Middle East, the Arab and Muslim people, recognize no enemy worse than Iran’s clerical regime.

Dear friends,
Let me highlight a very important reality. The Iranian regime’s meddling in the region is not from a position of strength but derives from the crises it faces and its fundamental weaknesses.
As Massoud Rajavi, the Leader of the Iranian Resistance said: From the beginning, interference of this regime in the countries of the region “was to cover up suppression and crimes committed by an inept regime belonging to the middle ages, which cannot direct the liberated forces after the antimonarchic revolution towards justice, freedom and economic and social progress”.
Export of crisis and war guarantee the regime’s survival. If the regime is limited to Iran’s boundaries it would rapidly face fatal internal disputes and subsequently be overthrown by tides of the Iranian people yearning for freedom.

The other significant reality is that the regime’s ostensible show of force is not from a position of strength, but the result of inaction and lack of firmness by the international community and regional powers. By the same token, wherever the regime meets firmness and serious resistance, it quickly is shaken up. The first decisive blow it received was in Yemen during the operation Decisive Storm when all its plans were foiled.
The Islamic Revolutionary Guard Corps (IRGC) also suffered consecutive setbacks in Syria, losing a large number of its members and mercenaries as well as dozens of high-ranking IRGC generals which demonstrated that defeating the regime is within reach.
Another important reality is that among all the various countries where the regime is engaged in war and terrorism, Syria is where it is most vulnerable. Therefore, it is necessary to emphasize the need to overthrow Bashar Assad which is considered to be the mullahs’ pivotal interest. There is no doubt that Syria’s people and combatants do have sufficient power to put an end to the life of this decadent dictatorship. And of course, this would be the beginning of the end for the Velayat-e Faqih regime in Iran, too.

Dear guests,
An overwhelming majority of the people of Iran are strongly opposed to the Iranian regime’s policy of occupation and warmongering. Eviction of the regime from the region is not feasible without active engagement of the Iranian people and Resistance. No coalition or alliance could ultimately succeed without the Iranian people and Resistance being at its center.
This has been the experience of the past 38 years. During the Iran-Iraq war, the Iranian Resistance was the most significant domestic element which shattered the regime’s war mobilization. Khomeini used to say that he would continue the war to the last house and the last person. But the Iranian Resistance compelled him to accept the ceasefire.
It was also the Iranian Resistance that stirred the world community through its international campaign, exposing the regime’s nuclear program. Otherwise the region and the world would have faced the nightmare of the mullahs armed with nuclear weapons. In exposing the fundamentalist nature of the Iranian regime and religious extremism under the name of Islam, it was the People’s Mojahedin Organization of Iran (PMOI/MEK) who paid the greatest cost of thousands of martyrs and political prisoners, showing that Khomeini and his regime’s claims and conducts have nothing to do with Islam. The MEK spread the message of genuine Islam which is freedom, compassion, tolerance, as well as peace, fraternity and coexistence with neighbors and the world.
For these reasons, the Iranian regime is well aware of the existential threat of the MEK. That is why in the past nine months, it has launched two missile attacks on Camp Liberty where some of the MEK members reside.

In the recent attack, parts of Camp Liberty burned and 50 residents were injured.
And it is also for these reasons that the Iranian regime has drawn an inviolable red line for other countries not to approach the Iranian Resistance in order to prevent formation of any front that would sound the death toll for the regime. It is only by crossing this red line that it is possible to overthrow the regime or at least neutralize its threats and dangers.

Dear friends,
Fortunately, in the past year, Arab and Muslim countries have taken invaluable steps in confronting the danger of the Iranian regime, including the OIC Summit Conference in Istanbul censuring the religious dictatorship’s meddling in the region, while some countries severed ties with the Iranian regime, and some imposed sanctions against Hezbollah.
The time has come, however, to step up practical efforts to evict Tehran’s religious dictatorship from the entire region. To this end, on behalf of the Iranian people who have so far sacrificed 120,000 lives in the struggle against Tehran’s rulers, I would like to emphasize the need for the adoption of a decisive policy by the US, Europe and countries in the region, to take the following practical steps to put an end to the destructive war in Syria which has led to the displacement of half of that country’s populace. These are the desires of the people of Syria, the people of Iran and all the peoples of the region and the need for peace and tranquility in this part of the world:

1. Condemning the Iranian regime’s atrocities and meddling in Syria by the UN Security Council, UN member states and all other international bodies;
2. Expelling the Iranian regime from the Organization of Islamic Cooperation and cutting ties with the Iranian regime by Arab and Muslim countries following the decisions made by the OIC Islamic Summit Conference in Istanbul, until such time that the regime completely terminates its meddling in the region;
3. Providing broad-based political and financial backing to the democratic Syrian opposition, as well as fulfilling and supplying their essential military needs and weapons;
4. Adopting the necessary international measures to remove the Iranian regime’s forces and affiliated militias from Syria, and undertaking punitive measures including sanctions against the regime. If it refrains from removing its forces, all economic and political relations with the Iranian regime must be made contingent on ending its meddling in the region;
5. Excluding the Iranian regime from any negotiations over the Syrian crisis;
6. Fully implementing UN Security Council resolution 2231 through the adoption of effective practical measures to prevent the Iranian regime’s sending of arms to Syria, Iraq and terrorist groups;
7. Banning all deals and trade with IRGC-affiliated companies;
8. Banning all forms of cooperation and joint action with the IRGC and the militia under its command in Syria and Iraq under the pretext of fighting Daesh;
9. Establishing a no-fly zone in northern Syria to protect the civilian population and to provide help to asylum seekers and displaced refugees.

I have no doubt that regardless of their differences, countries in the region are able to join hand in hand with the Iranian people and Resistance, in order to put an end once and for all to the rule of the Velayat-e Faqih regime and turn the page in the history of this part of the world.