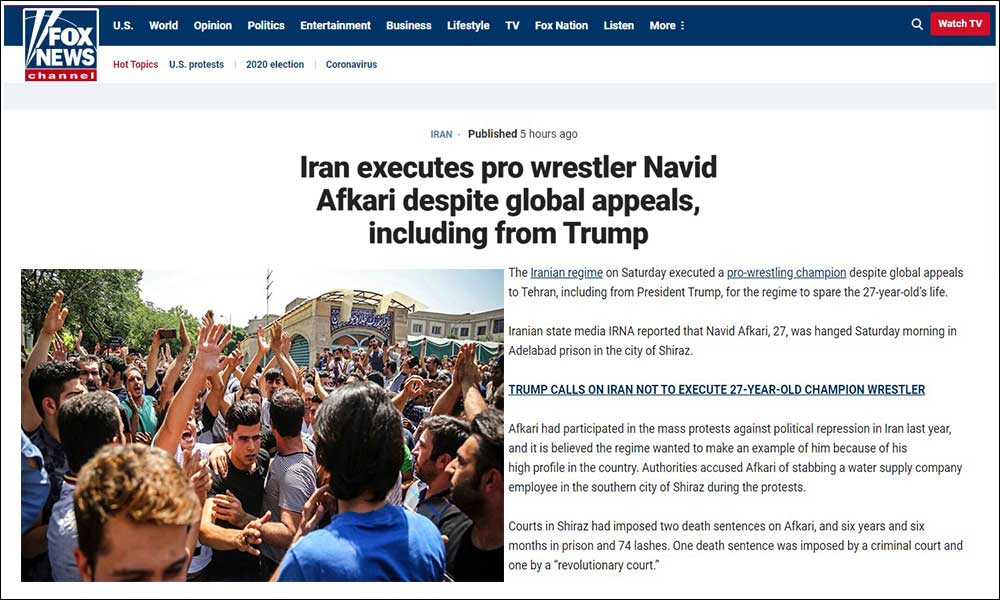 Maryam Rajavi called on the United Nations, the European Union and other international organizations to take action against Iran in response to the killing.

Iranian state media IRNA reported that Navid Afkari, 27, was hanged Saturday morning in Adelabad prison in the city of Shiraz.
Afkari had participated in the mass protests against political repression in Iran last year, and it is believed the regime wanted to make an example of him because of his high profile in the country. Authorities accused Afkari of stabbing a water supply company employee in the southern city of Shiraz during the protests.

Courts in Shiraz had imposed two death sentences on Afkari, and six years and six months in prison and 74 lashes. One death sentence was imposed by a criminal court and one by a “revolutionary court.”

There had been appeals across the globe, including from FIFA, the World Players Association, dozens of human rights organizations. President Trump joined these calls.

“Hearing that Iran is looking to execute a great and popular wrestling star, 27-year-old Navid Afkarai, whose sole act was an anti-government demonstration on the streets,” Trump tweeted. “To the leaders of Iran, I would greatly appreciate if you would spare this young man’s life, and not execute him.”

Iran had broadcast Afkari’s confession last week, resembling a number of coerced confessions extracted from regime opponents over the last decade. Supporters of Afkari said he had been tortured.

In response to Trump’s tweet, Iran had responded with a state TV package of footage that included the employee Hassan Torkaman’s parents and footage of Afkari saying he had stabbed the man in the back.

Iranian opposition groups said the execution would only strengthen the resolve of the Iranian people to overthrow the theocratic regime.

“The people of Iran, especially the courageous youth, will not remain silent vis-à-vis the savage execution of this brave son of Shiraz and will rise up in solidarity with the heroic people of Fars Province over his unjust execution,” Maryam Rajavi, the President-elect of the National Council of Resistance of Iran (NCRI), said in a statement, adding that the execution “will only add fuel to the flames of the Iranian people’s uprising and will strengthen their determination to overthrow the clerical regime and to establish freedom and democracy.”

Rajavi also called on the United Nations, the European Union and other international organizations to take action against Iran in response to the killing.

“Silence and inaction are tantamount to a green light to, and complicity with, the regime to continue its atrocities,” she said.