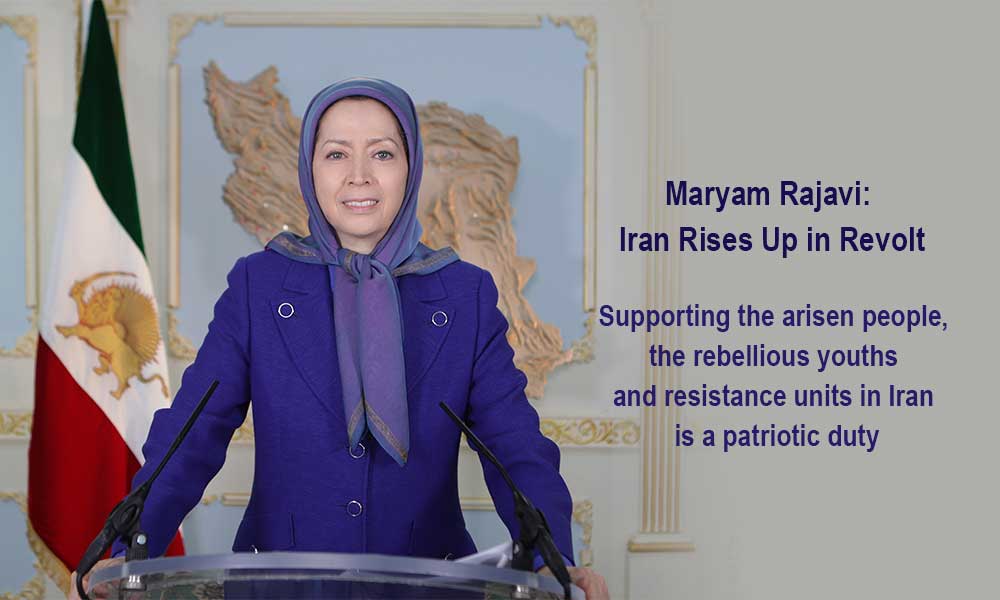 Greetings and salutations to the rebellious people and youths in 144 rebellious cities,
Dear compatriots,

With more than 200 martyrs, the Iran uprising manifests the strong, invincible and victorious resolve of the people of Iran to overthrow the Velayat-e Faqih religious tyranny.
Hail to the martyrs of Iran’s rebellious cities, who gave their lives to welcome the angel of freedom.
We praise their passionate and loving hearts that stopped beating to enable the heart of Iran uprising to continue beating for the advent of freedom.
The people of Iran are breaking the chains of tyranny and reaction.
The countdown has begun for the Velayat-e Faqih’s unjust and oppressive rule.
Today, not only Iran’s history and nation but the entire world is admiring our arisen compatriots in Iran.
But Khamenei, the mullahs’ bloodthirsty leader, used the words “hooligans” and “thugs” 15 times in his delirious speech on November 17, that lasted only a few minutes, in order to vilify them.
If defying the rule of religious dictatorship and rising up to establish freedom, democracy and equality are considered mischief and insecurity for the mullahs’ regime, then Iran’s rebellious youths, resistance units, and all the Mojahedin and freedom fighters are proud of having done so.
Our cities have risen up in revolt, encircling the moribund Velayat-e Faqih regime. This concerted siege has been bolstered repeatedly since December 2017 to set the stage for the fall of the regime’s disgraceful rule.

On November 4, Massoud Rajavi, the Iranian Resistance’s Leader, said: “The mullahs’ rule is going to see numerous tremors on its way out.” He stressed: “We must prepare ourselves to launch a maximum offensive and ramp up our fight a hundred times more.” Ten days later, everyone saw the tremors with their own eyes.
Over the past year, the resistance units kept the flames of protests alight all over Iran despite horrendous pressure and persecution by the mullahs’ Revolutionary Guards (IRGC) and Intelligence Ministry (MOIS). They endured great pain, suffering, torture and imprisonment to move towards organizing the great Army of Freedom.

As Ashraf Rajavi once said, the world never learned the extent of this agony.
But the throngs of valiant youths rising up in cities all across Iran have advanced out of such great pains and suffering, the sacrifices made by the victims of the massacre in Ashraf, the 1988 massacre of political prisoners, and the 120,000 martyrs who have given their lives for freedom.
Look at the rebellious cities and this defiant generation and their battle.
This is the true image of our people and our country. Iran has revolted against the absolute tyranny of the vali-e faqih whose rule and authority had been stressed so much by the inhumane Khomeini.

The trend of events from December 2017 up to this date clearly shows that this uprising is durable. As the Iranian Resistance reiterated from the outset, the clerical regime does not have the power to contain the uprisings and quell the revolts of rebellious cities, resistance units and the great Army of Freedom.
The army of the unemployed and hungry, the army of suppressed women, and the army of those who have nothing to lose but their chains, are not going to give in and surrender. They are not thinking of reforming the regime. They are not seeking to charm the State Security Force or the Revolutionary Guards. They want to uproot the entire regime.
Currently, the people of Shiraz, Shahriar, Fardis, Kermanshah, Ahvaz, and other cities are taking control of whole districts in their cities. The time has come to liberate Iran entirely from the mullahs’ captivity and occupation.
The high spirits and fearless approach of protesters in confronting the regime’s forces, and the precipitous expansion of the uprising to various provinces, have a terrifying message for Khamenei and his establishment.
What is clear is that no assistance or appeasement by Western governments, and no games of reformists versus hardliners will alleviate the regime’s pains or save it from certain and fast-approaching downfall. Nor will the wars and crimes in Iraq, Lebanon and Syria, the regime’s nuclear programs, their plunder of oil revenues, or even their plainclothes agents and the plethora of various hirelings of the Intelligence Ministry.

The Velayat-e Faqih religious dictatorship has reached the end of the line. Today, the cries of the people of Iran can be heard from the streets of Tehran, Isfahan, Kamyaran, Sirjan, Behbahan, Shiraz, Marivan, Bukan, Karaj, Khorramshahr and Mahshahr. They are crying out, “Dictator, shame on you, let go of our country.” They are chanting, “the mullahs must get lost.” Therefore,
1. I urge my fellow compatriots to actively participate in the memorial services of martyrs, everywhere, in any manner and to any possible extent.
2. Supporting the arisen people, the rebellious youths and resistance units is a patriotic duty.
3. Do not forget to attend to the wounded, cure their wounds, and help the families who have lost their guardians.
4. Protests and strikes at every possible time and place are essential for the continuation and expansion of the uprising.
5. The enemy is mobilizing all its forces, heads of branches and clerics to launch a counter attack, to terrorize the public and to hold counter demonstrations. But these methods are no longer effective. Do not fear their tricks and bellows. National solidarity and cooperation are the best response.
6. World governments and the international community must set aside all considerations and reservations about the regime. They should demand an immediate halt to the killings and arrests. If the regime does not comply, they must readily pull the trigger of UN Security Council sanctions. The UNSC must declare the regime’s leaders as criminals committing crimes against humanity. They must face justice for this massive suppression and bloodshed. The international community must strongly condemn the mullahs’ terrorism on the internet and assist the people of Iran in circumventing this inhuman blockade.
7. The clerical regime is making all effort and using all means to conceal the true death toll. The United Nations must immediately dispatch investigative missions to Iran to evaluate the number of those killed, injured and imprisoned.
Yes, this is a revolution until victory
Hail to the martyrs
Hail to the rebels rising up for freedom
Hail to the Iran uprising to overthrow the regime