Maryam Rajavi: Iran’s ruling theocracy must be isolated by the world community, its dossiers referred to the UN Security Council, and its leaders face justice for crimes against humanity 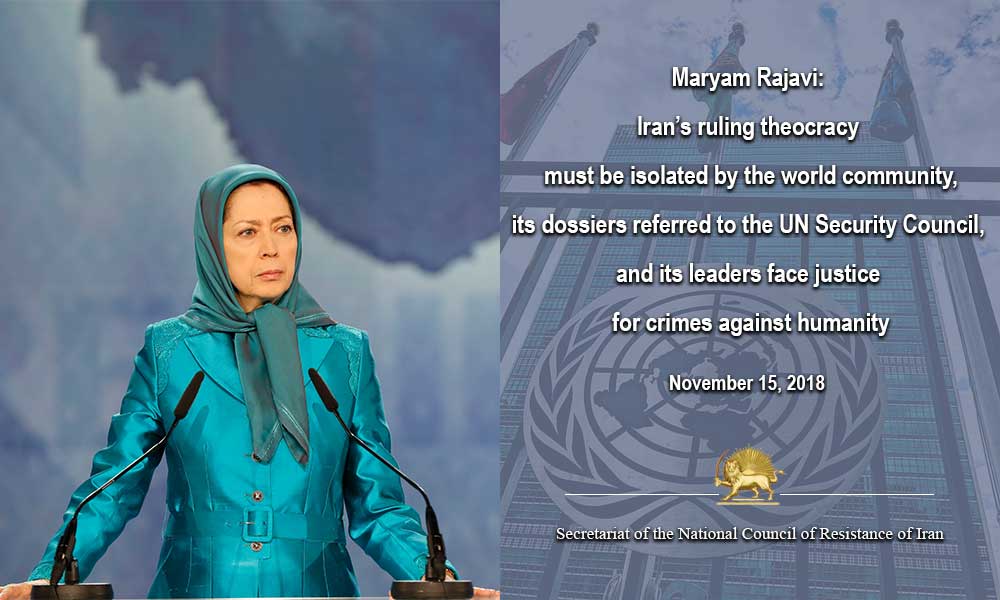 “Condemning the systematic and gross violations of human rights by the theocratic regime ruling Iran, the UN resolution once again confirmed that the regime blatantly tramples upon the Iranian people’s most fundamental rights in all political, social and economic spheres,” said Mrs. Maryam Rajavi, the President-elect of the National Council of Resistance of Iran, in welcoming the 65th UN resolution condemning human rights abuses in Iran.
“The Iranian regime is in no way congruous with the 21st century and must be isolated by the world community,” Maryam Rajavi added.

The UN resolution stresses the “alarmingly high frequency” of the use of the death penalty including against minors, “the widespread and systematic use of arbitrary detention,” poor prison conditions “deliberately denying prisoners access to adequate medical treatment,” and “cases of suspicious deaths in custody.”

Considering the regime’s other crimes and repressive policies which the resolution fails to enumerate, including systematically assassinating opponents abroad, and depriving the people of Iran of their rights to decide their country’s fate, to enjoy the rule of law, to have access to fair trials, to have free access to information, and to form independent syndicates and unions for workers, students and government employees, it is safe to say that the Iranian regime is the most ruthless, aggressive violator of human rights in the world today.

The world community must therefore refer the dossiers of the regime’s crimes to the UN Security Council and recognize the right of the people of Iran to resist against so inhuman a regime.

Maryam Rajavi reiterated, “The most vivid example of grave violations of human rights in Iran is the 1988 massacre of political prisoners perpetrated by the regime’s key institutions and leaders, who are still in power, still defend this crime, and remain immune from punishment. The world community faces a monumental test in investigating and prosecuting those responsible for this great crime against humanity.”

Secretariat of the National Council of Resistance of Iran
November 15, 2018