Maryam Rajavi: Coronavirus catastrophe in Iran – Let us rise up to protect our country and society and safeguard Iran’s health, security and future 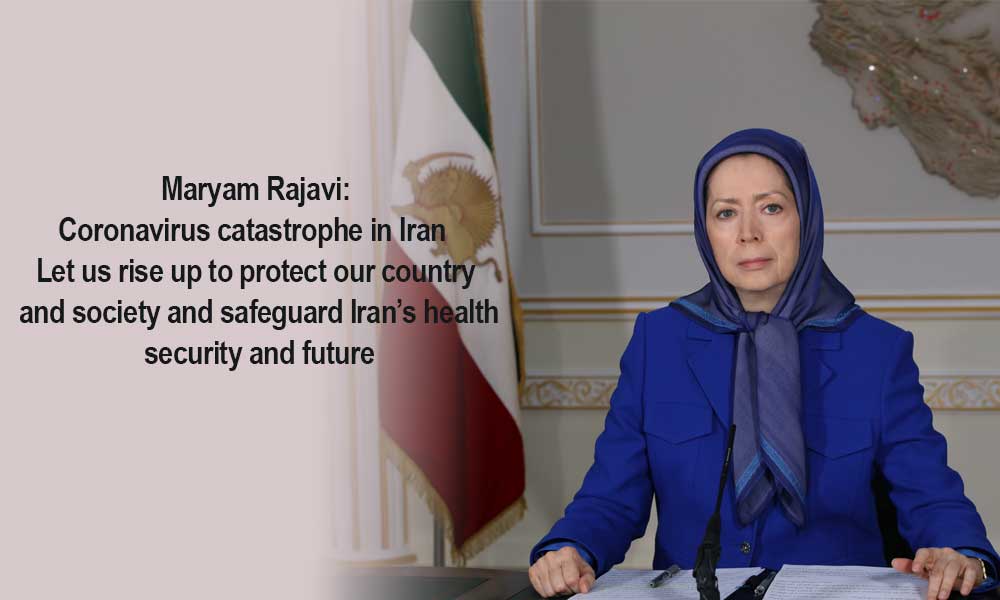 Dear compatriots,
Selfless physicians and nurses,
In these difficult and troubling days, when because of the mullahs’ criminal cover-up and inaction, the outbreak of Coronavirus (COVID-19) has endangered the lives of our people, I urge you to strengthen our national solidarity to prevent further spread of the infection, to protect the lives of our compatriots, and to protest and confront the detested ruling regime.

I send my condolences to the grieving families who have lost loved ones, and I pray for the quick recovery of those compatriots who have contracted this virus.
We pay homage to the selfless physicians and nurses who lost their lives in the process of providing care to Coronavirus patients. These nurses risk their own lives while for years, their most basic rights have been trampled upon during the mullahs’ suppression and plunder. All of us feel a sense of debt and gratitude to these selfless women and men.

We also salute the supporters of the People’s Mojahedin Organization of Iran (PMOI/MEK) and members of Resistance Units who contracted the disease and lost their lives while working to provide assistance to the victims of Coronavirus.
On the orders of the regime’s supreme leader Ali Khamenei, the regime kept the public in the dark about the outbreak of the Coronavirus and refrained from taking timely preventive measures, because Khamenei did not want to impact the turnout of the 1979 revolution anniversary on February 11, and the parliamentary election masquerade.
This murderous mullah, who since day one has ruled through torture, executions, warmongering and thievery, is now unabashedly putting the lives of 83 million Iranians at risk. In his brazen and cruel remarks about the virus, he said others have used this disease as an excuse to disrupt the elections. He further claimed that the virus is “not that big of a deal” and that his regime had been transparent with the public since day one.

Today, after losing at least 1,800 of our compatriots, the mullahs are still not talking about the origination of the virus and how it was transmitted in Qom. They are not talking about the reason for refusing to stop flights to China by Mahan Airline, which is controlled by the Islamic Revolutionary Guard Corps (IRGC). These flights are still continuing as we speak. Khamenei has tasked the IRGC, the Ministry of Intelligence and Security (MOIS) and other suppressive agencies to do their utmost to prevent disclosure of statistics about the actual death toll and the number of people who have contracted the virus.

More than anyone else, this disease kills the impoverished, workers, and laborers; people who live in villages and suffer from poverty and hunger; and at least 20 million people who live in contaminated slums and shanty towns. The true dimensions of the clerical regime’s ruthlessness and crimes can best be seen in abandoning hundreds of thousands of prisoners who are defenseless against this virus.

At the same time, the mullahs have not only jeopardized the lives of the people of Iran in all its 31 provinces, but they have turned the country into an epicenter for transmission of the virus to vast parts of the rest of the world. This is the flip side of the mullahs’ belligerence and export of terrorism that is meant to preserve their disgraceful rule.

My fellow compatriots,
What has made our country seriously vulnerable in the face of diseases and natural disasters, is a brutal and pilfering dictatorship that does not hesitate to commit any imaginable crime to preserve its disgraceful rule. This is a regime that has destroyed all economic, social, medical, and health care infrastructures and the environment.
Indeed, how can a country resist against the spread of the Coronavirus when at least 12 million people are starving in it and nearly 60 million people are living under the absolute poverty line? This is particularly ominous in circumstances where the lion’s share of our country’s wealth is spent on Khamenei’s ruthless IRGC or on wars and bloodshed in Syria, Iraq and Yemen.

The mullahs’ criminal conduct in the Coronavirus incident is the flip side of its great massacre of protesters during the uprising in November 2019. When their rule is in danger, they have no mercy on anyone. The images of children who were killed by the IRGC have enraged the conscience of contemporary humanity.

A recent report by Amnesty International on the Iran uprising in November 2019 states: At least 23 minors were killed by security forces using live ammunition during November protests. Officials wrapped the bodies of victims in shrouds and handed them to their families just minutes before the scheduled burial, on the condition that they remain silent.

The religious fascism ruling Iran is using all its power to prevent the disclosure of the number of those killed during the uprising in November. In the weeks and months following the uprising, the PMOI/MEK announced the names of 755 of the martyrs, including the names of martyred children, in order to thwart the mullahs’ conspiracy of concealment and deception.
I would like to urge my compatriots, all the grieving mothers, all relatives, friends and comrades of the martyrs of the uprising in November, to divulge the names of these martyrs through any means possible and to inform international human rights organizations.

Dear compatriots, gallant youth, enlightened and combatant students,
As the Leader of the Iranian Resistance, Massoud Rajavi, said: The Iranian people’s fight against the Coronavirus is part of their broader and fateful war against Khamenei and the inhuman clerical regime.
The ruling mullahs have nothing to do with humanity, Iran or Islam. They do not have the ability or the will to protect Iran’s national interests.
Today, not only the freedom of the people of Iran, but their very lives and health, and the country’s economy and existence depends on the overthrow of the clerical regime. Likewise, global and regional peace and security and confronting natural disasters depend on regime change in Iran.

Therefore, in this sensitive juncture of our country’s history, I would like to point out the following:
1. Direct and vent your pent-up anger at the regime. Young people and especially university students must use their creativity and innovative ideas to break through the obstacles and open the path forward. We ourselves have to rise up to protect our country and society, and ensure its health, security and future. We must encourage everyone to show their outrage, and to stage protests and strikes to any extent possible.
2. Medical and health care resources must be removed from the monopoly of the IRGC and the agencies affiliated with Khamenei, and placed at the disposal of the public to be used under the supervision of honorable and freedom-loving physicians and nurses.
3. Supporters of the PMOI and the Iranian Resistance, Resistance Units, resistance councils, and popular councils, must aid and assist those who have contracted the virus and help save the lives of our compatriots, while taking all the necessary safety measures for themselves and while using the full range of available medical resources. This national solidarity and bond is a part of the struggle against the detested clerical regime.
4. I urge all my compatriots to use every possible means to inform the rest of the public about the news of the Coronavirus, and particularly report on the names of the deceased and the death toll, as a way of foiling the regime’s conspiracy of silence in this regard.
5. The UN Security Council, the UN Secretary General, the UN Human Rights Council, the High Commissioner for Human Rights, and other relevant international organizations must condemn the clerical regime for its continued criminal cover-up of the spread of Coronavirus in Iran, which has endangered the lives of people in Iran and other countries. I also urge them to prevent a major humanitarian catastrophe by taking immediate action to save the lives and health of prisoners, particularly the political prisoners who are under torture and face added pressure and limitations.

Dear Lord, keep the people of Iran safe and healthy from illnesses and cure them of the Velayat Virus (clerical regime).

Hail to the people of Iran