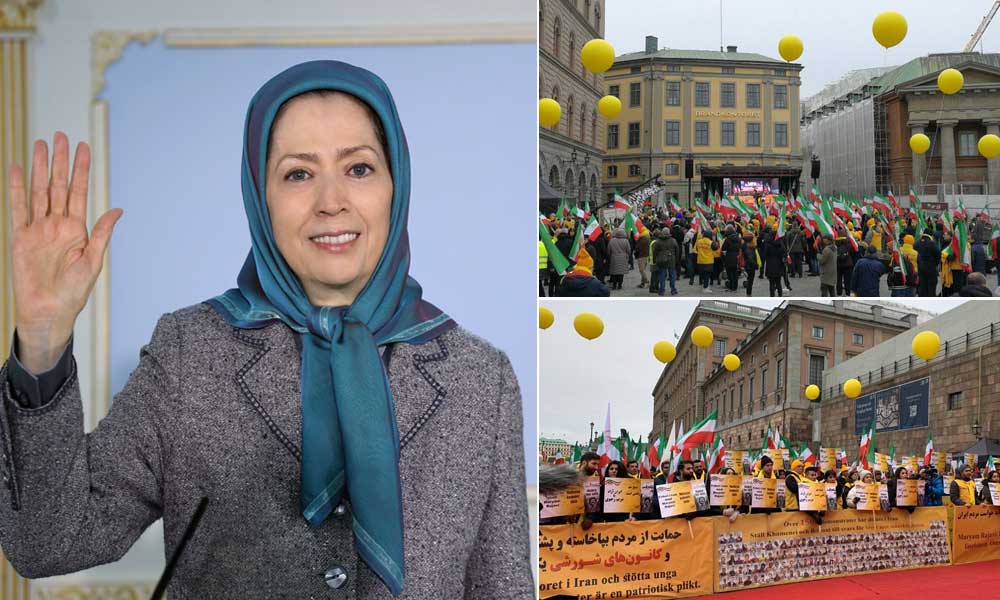 Your gathering and rally today in Stockholm is a clear testament to the Iranian people’s relentless resolve to achieve freedom and to overthrow the inhuman clerical regime.

Dictators, both the Shah and the Sheikh, believe that they are entitled to a life-time of dictatorship. That is why they recognize no bounds when it comes to shedding the blood of innocents and committing other crimes. But history teaches us that victory and staying power belongs to the unyielding right of the Iranian people to freedom and democracy.

The anti-monarchic revolution of 1979 is unforgettable, owing to the remarkable solidarity, sacrifices and unity that it inspired for the cause of freedom. Khomeini usurped that revolution and was able to establish the mullahs’ dictatorship in place of people’s sovereignty .

As a result of the mullahs’ usurpation of power, for over 40 years now, our nation has been under the occupation of criminals that have generated a disgraceful record replete with corruption, lies, theft, destruction, death, and spread of fundamentalism, terrorism and misogyny.

This is an outlaw dictatorship that boasts the highest per capita number of executions in the world and has executed the largest number of women.

It has presided over a crumbling the economy, with one of the highest inflation rates in the world, closure of industrial factories, bankruptcies of financial institutions, and more than 10 million unemployed people, over half of whom are university graduates.

Their policies have led to the increasing rise in the 20 million strong population living on the fringes of the cities.

They have created a situation in which Iran is now fourth on the international ranking of the most miserable countries in the world.

Indeed, after 40 years of the mullahs’ rule, we are confronted with a country whose soil is destroyed, its air is polluted, its forests have been devastated, its lakes, ponds and rivers have been dried and its environment destroyed.

We see a people who are vulnerable in the face of natural disasters, such as floods and earthquakes; they are victims of road crashes and deaths; they are weakened and distressed by poverty, and are forced to sell their body parts; they are humiliated by the regime-triggered suppression, unemployment, and social ills like drug addiction.

On the other hand, we also witness a people and a nation that is restless against injustice. They harbor immense hope for change, rebel against suppression, and refuse to surrender to the velayat-e faqih (absolute clerical rule).

I am proud to say that over the past 40 years, the struggle for freedom has not ceased for a second. Today, this struggle manifests itself in the Iranian people’s uprisings, including the magnificent uprisings that have continued since December 2017 to November and December 2019, and January 2020, and show no signs of abating.

As the Iranian Resistance’s Leader, Massoud Rajavi, has said: “The flames of resistance for freedom can never be extinguished. However much they (the regime) refract the light, the refraction of rays will shine ever brighter.”

Compatriots,
On the anniversary of the February 8 (1982) epic, we honor the memory of Ashraf Rajavi, the champion of PMOI women, commander Moussa Khiabani, and their comrades who made the ultimate sacrifice.

They painted an epic struggle and kept this unforgettable flame burning, shining on the path of the Iranian people’s struggle and perseverance against the clerical regime.
Freedom-loving Iranians and supporters of Ashraf,
In Sweden, United States, Germany, the Netherlands, Britain, France, Italy and Canada,
Supporters of the uprising, and the resistance units,
Your efforts to echo the voice of your people’s Resistance and uprising to the rest of the world is admirable.

Intensify these efforts and ensure that the clerical regime faces an international blockade.
Inspire international governments and institutions to support the Iranian people’s rights and to condemn the regime’s crimes.

The international community has a duty to call for the release of uprising detainees, to refer the dossier of the regime’s crimes to the United Nations Security Council, and to adopt a firm policy in the face of the regime’s human rights violations, terrorism and warmongering in the region.

A free Iran endowed with people’s sovereignty is on the horizon.

Filled with this hope, we will, with conviction and passion, march ahead shoulder-to-shoulder with and for the uprising, and at every moment.