Khamenei defies inspection of military sites to acquire the bomb 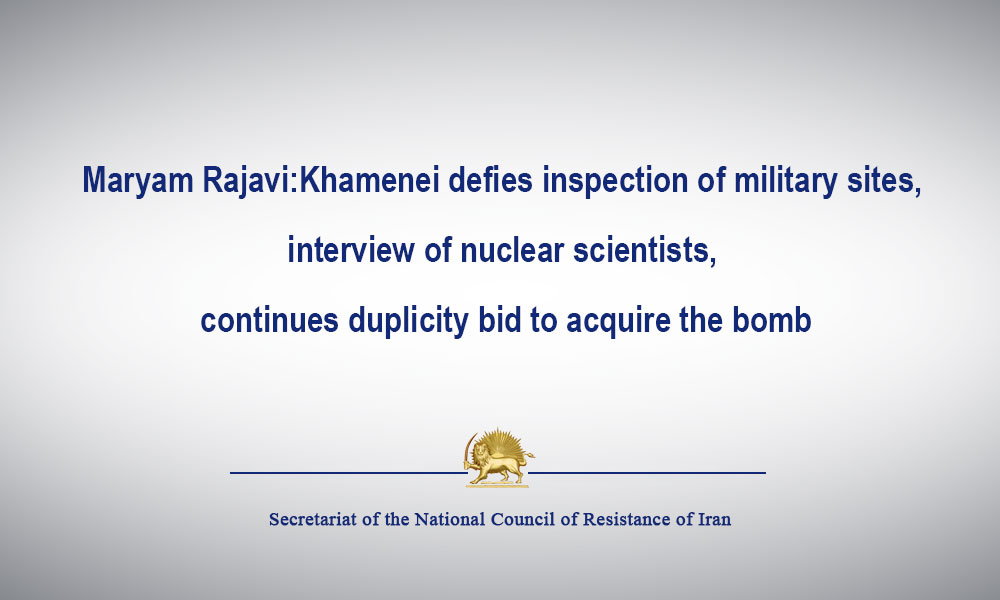 Maryam Rajavi, the Iranian Resistance’s President-elect, made the following comment in this regard: Khamenei’s remarks and his regime’s conducts which coincide with the nuclear talks, reaffirm the fact that force and firmness are the only language the mullahs’ regime understands. After three decades of concealment and deception, adding six or nine months to the breakout time does not comprise a solution. Only the stringent implementation of UN Security Council resolutions can definitely prevent the regime from gaining access to the nuclear bomb. Placating negotiations with this religious fascism will not secure the world from the threat of nuclear-armed mullahs but will further incite their danger to the peoples of Iran, region and the world by giving time to the terrorist mullahs.

At a US House Foreign Affairs Committee hearing on April 29 and in a meeting at the French Senate on May 5, Maryam Rajavi spelled out positions of the Iranian Resistance on the mullahs’ nuclear projects. While emphasizing the importance of implementation of the six UN Security Council resolutions, she stressed on the need for intrusive inspections at any time and any place of all military and non-military sites as well as on the regime’s accountability for the military dimensions of its nuclear projects, nuclear specialists and nuclear equipment smuggling networks.

Maryam Rajavi added: The nuclear bomb guarantees the Iranian regime’s survival and is requisite to its hegemony over the region. This is why the people of Iran earnestly oppose this program and the Iranian Resistance calls for a democratic and non-nuclear Iran

On May 20, Khamenei said, “We will not allow any alien inspection of our military sites. They say we must come and interview your scientists… I will not permit foreigners to come and sit down and talk to our scientists… Giving this permission is out of question. The only way to confront the brazen enemy is with firm determination and lack of submission.”

In the meantime, UN reported that in the midst of nuclear talks, the clerical regime had intended to buy banned compressors which could be used in nuclear projects. The report also said Tehran had attempted throughout the year to obtain uranium enrichment technology in the black market. Also on April 20, 2015, Britain introduced to the UN an active network belonging to the Iranian regime tasked with procurement of nuclear material.