Chain of lies and cover-up by Khamenei, Rouhani, and the IRGC about shooting down Ukrainian airliner 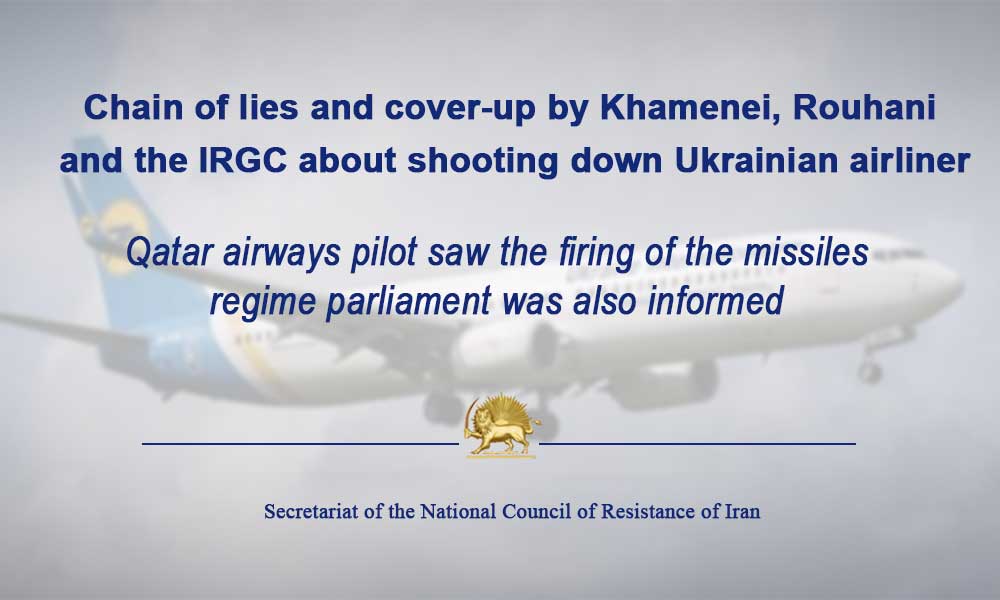 Subsequent to a Ukrainian television station’s airing of the exchange between the Aseman Airlines co-pilot and Tehran airport control tower about the firing of missiles at the Ukrainian airliner on January 8, 2020, today, the Iranian regime’s state media disclosed that the pilots of a Qatar Airways plane nearby had also made the same observations and that the regime’s parliament deputies had been aware of that incident.

The state-run newspaper, Jahan San’at wrote today, “Simultaneous with the warnings given the Aseman Airlines pilot, a Qatar Airways plane flying near the site of the incident had a similar exchange with the control tower.” The daily added that Abolfazl Mousavi, a member of the Parliament’s Committee on Development had told the paper, “In reports given to the Committee on Development, an exchange similar to what was in the disclosed audio file had been reported by a Qatar Airways crew.”

As such, it once again becomes clear that all the technical and administrative agencies of the Tehran airport, the Civil Aviation Organization, and different government agencies as well as the IRGC’s chain of command had been informed about the firing of missiles at the Ukrainian airliner from the very beginning. From the early hours of the incident, Khamenei and Rouhani directed an extensive cover-up scheme to conceal, lie, and mislead the public and the international community about this horrific crime.

Following the worldwide disclosure of astounding scheme of lies by Khamenei and Rouhani, and as the 40th day memorial of the victims is approaching, Mrs. Maryam Rajavi, the President-elect of the National Council of Resistance of Iran (NCRI), called on everyone to express sympathy with the families of the victims and protest against the mullahs’ demagogic regime. She also underscored the need to prosecute Khamenei, Rouhani and IRGC commanders by an international court. She added that the United Nations Security Council must hold to account the regime’s leaders for the martyrs of the November uprising and for the victims of the downed Ukrainian airliner.

Secretariat of the National Council of Resistance of Iran
February 4, 2020