Maryam Rajavi: Mass execution of Sunni prisoners is a crime against humanity and its perpetrators must be brought to justice 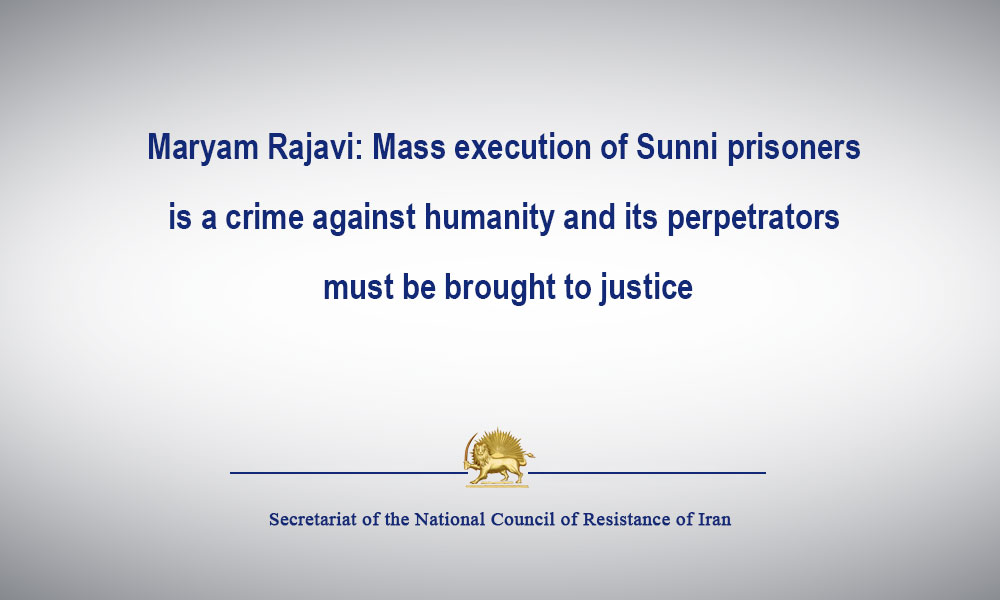 She also urged Shiite and Sunni clergies around the world to not remain silent vis-à-vis this major atrocity and denounce Ali Khamenei, the great enemy of the people of Iran and the region, for his anti-human and anti-Islamic crimes.

Maryam Rajavi added: The mullahs’ anti-human regime carried out the mass execution of our Sunni brothers on the anniversary of the 1988 massacre of 30,000 political prisoners in Iran. They are trying in vain to contain the volatile social atmosphere and popular protests by terrorizing the public.

The NCRI President-elect pointed out: The 1988 massacre of political prisoners in Iran is the biggest crime of its kind since World War II. The clerical regime’s crimes systematically committed over the past 37 years are all examples of crime against humanity, war crime or genocide. And how the international community reacts to these crimes is its great test.

The time has come for the UN Human Rights Council and the UN Security Council to end their silence and bring the record of the Iranian regime’s crimes before the International Criminal Tribunal. Ali Khamenei and other leaders of the regime as well as direct perpetrators of these crimes must be brought to justice, Maryam Rajavi reiterated.

A large number of Sunni prisoners were hanged this morning, Tuesday, August 2, 2016, at Gohardasht Prison, in Karaj. According to the victims’ families, at least 20 have been executed. Prison authorities declared a state of emergency, disconnected all telephone booths and prevented prisoners from referring to the prison’s dispensary.

The regime’s Judiciary had told the families of prisoners that they had time until 3 p.m. Tuesday afternoon to go to prison for a final visit with their children. However, before they arrived, the Ministry of Intelligence contacted the families and said they should go to the Coroner’s of Kahrizak to receive the bodies of their children.

Shahram Ahmadi is among the Sunni prisoners executed. He was wounded in April 2009 at the time of arrest by Intelligence agents and lost one kidney and part of his intestine. He was badly tortured for 43 months in solitary confinement in the Intelligence Department’s detention center in Sanandaj, as a result of which he contracted various illnesses and lost his hearing to a large extent. In October 2012, the mullahs’ Judiciary sentenced him to death on the alleged charge of Moharebeh, or waging war on God. His younger brother, Bahram Ahmadi who was under 18 years old at the time of arrest, was executed in Ghezel Hessar Prison in January 2012 along with five other Sunni political prisoners.