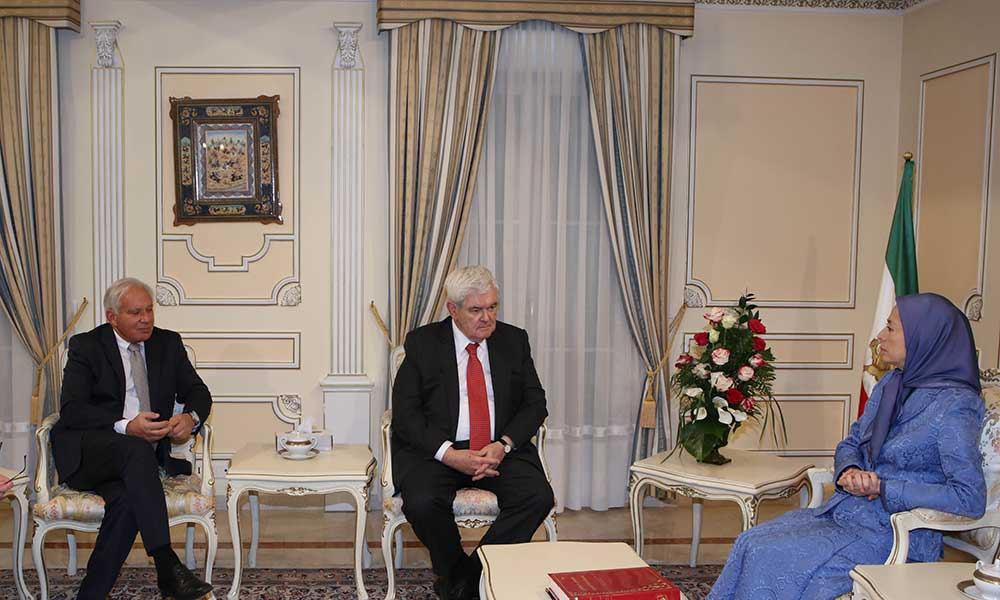 Maryam Rajavi elaborated in this meeting on the latest developments in Iran and the nationwide uprising, stressing on the Iranian people’s demand for the overthrow of the mullahs’ corrupt dictatorship in its entirety as reflected in their chants heard in cities across the country.

She said, “After these protests, the Iranian people, the ruling regime, and its relations with the region and the world are not going to return to the pre-uprising conditions. Today, the clerical regime is very fragile and weaker than ever before. What the Iranian Resistance has been saying about the solution, the regime’s overthrow being imperative and within reach, and the existence of an alternative and an organized resistance to realize it, has become most clearly evident.”

Maryam Rajavi also elaborated on the regime’s crimes in dealing with the uprising, particularly the extensive arrests of thousands of people, and the torture and murder of young protesters in detention.

She repeated her call on the UN and the International Community to take urgent action for the freedom of those arrested in the uprising. She reiterated, “Opening fire on protesters, making mass arrests, and torturing prisoners to death are examples of crimes against humanity. The International Community’s commitment to the Universal Declaration of Human Rights demands that it ends its silence and stop appeasement and engagement of the mullahs’ criminal and illegitimate regime. An international inquiry commission must be formed to investigate the arbitrary arrests and the practices of Khamenei’s henchmen in prisons, and take serious practical measures to stop these crimes.”

In his remarks, Newt Gingrich said there is a bipartisan support in the United States for the Iranian people’s struggle and uprising to achieve democracy and get rid of the religious dictatorship, as demonstrated by their joint presence in the meeting with Senator Torricelli. He said the Iranian regime’s moderation is an illusion. “The MEK (PMOI) is a real force. The level of fear of you and your resistance is growing among the regime.”

Mr. Gingrich reiterated that the younger generation’s participation and their ties with the MEK (POMI), the organized resistance, and the democratic alternative, ensures the progress of the uprising and the Iranian people’s victory in their struggle for freedom.

Senator Torricelli said the 38-year struggle of the MEK (PMOI) and the Iranian Resistance is bearing fruit. Today, people are chanting your slogans and repeating your goals throughout Iran. They made Khamenei (the regime’s leader) acknowledge in his recent speech that it was the MEK (PMOI) who advances the uprising inside Iran and had organized and called for it in advance. Like all dictators, he blamed foreign powers to overshadow the alternative to his regime. He said two angles of the triangle of these protests were the United States and Saudi Arabia and the third angle was the MEK (PMOI) inside Iran. But the truth is that the best and most the U.S. or any other power can do is to declare support for the Iranian people’s desire to overthrow this regime and support the uprising you are advancing. This is something that they had hesitated to do until just last year.