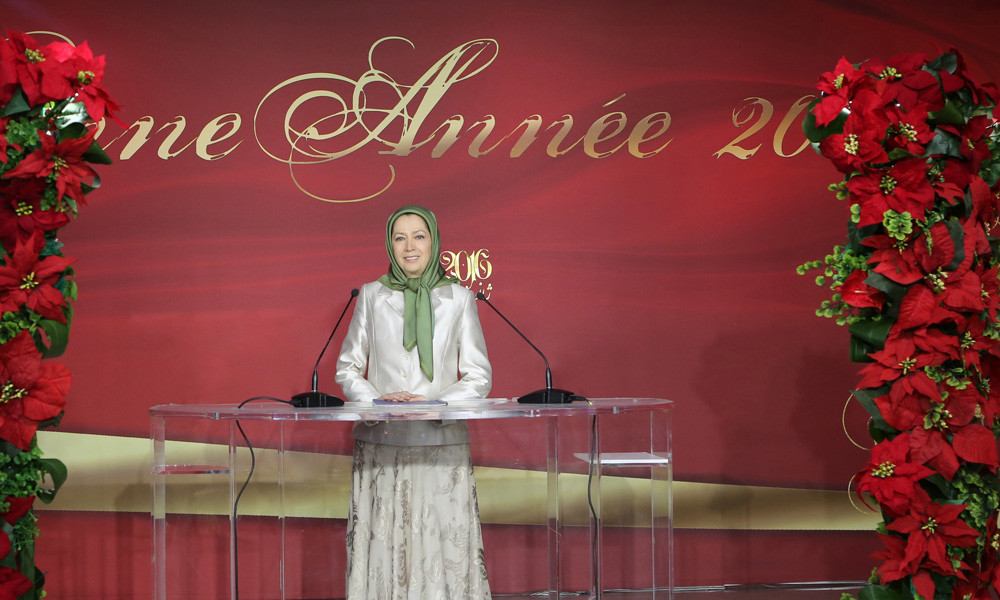 In a gathering of French supporters of the Iranian Resistance celebrating the New Year, Maryam Rajavi expressed her regrets

over bitter incidents of 2015 which made the world suffer especially in France and in the Middle East.

She pointed out:
Dear friends and neighbors,
My best wishes for the New Year 2016. On behalf of the Iranian people and Resistance, I wish a year filled with happiness and fraternity for the people of France.
I hope it will be a year of progress, prosperity and security for France, and the year of freedom for my people in Iran.
In the words of the great Persian poet Hafez, “We are going to paint a new design of the sky!”
Like most Iranian poets, Hafez was strongly opposed to religious fanaticism and extremism. So, in the dark era of the Mongol attack on Iran, he wrote poems that are eternally full of hope for freedom and humanity. It is the same spirit that is felt here in the beginning of the New Year.
Now that are world is targeted by extremism under the banner of Islam, like Hafez, we invite everyone to a new drive to build a world free of religious fascism of the Iranian mullahs and fundamentalists of the same nature, like DAESH. A world based on tolerance and freedom.
Last year was a harsh one for the Middle East because of the persistence of bloodbaths in Syria and Iraq, and continuation of the suffering, displacement and repression.
It was also a difficult year for Iran because of stepped up suppression of women and followers of other religions and because of nearly one thousand executions under the so-called moderate Rouhani government. He also had a rocket attack launched on Camp Liberty which left dozens killed.
In the depth of this darkness, however, the flame of hope is brighter than ever.

Contrary to the mullahs of Iran who could not hide their pleasure over the Paris massacres by DAESH extremists, we saw the beautiful flame of hope in the beautiful solidarity with the Iranian Resistance after the rocket attack on Camp Liberty.
We also saw that hope is ever livelier in Iran when Iranian teachers took to the streets and staged protests all across the country. We saw it in the demonstrations of the people of Azerbaijan and Kurdistan, and in the gatherings of angry families of political prisoners and victims of executions outside Tehran’s Evin Prison.
And finally, we can see this flame in the wave of protests by the people of France to human rights abuses in Iran on the eve of Rouhani’s visit to Paris at the end of this month.

Rouhani seeks to conceal the detestable image of the Iranian regime. This duplicity, on his part and part of other mullahs, is an affront to human conscience the world over.
On the one hand, the mullahs rejoice the November 13th massacre in Paris; on the other hand, Rouhani ostensibly condemns the attack.
This is a division of role that must not deceive anyone.
Rouhani defends the executions in Iran. Under his government, more than two thousand people have been executed. Rouhani explicitly supports Bashar Assad’s dictatorship. He has done his utmost to support the IRGC’s war machine. Two weeks ago, he issued an order for the expansion of the IRGC missile system.
Surely, everyone is appalled by all these things.

Dear friends,
Despite their atrocities, the mullahs and DAESH experienced some bitter setbacks in 2015.
The mullahs’ retreat from building the atomic bomb is a defeat for the regime. The Iranian Resistance is proud to have exposed this program and drove the mullahs into a deadlock. Fortunately, France’s decisiveness in the negotiations prevented giving more concessions to the mullahs.
The Iranian regime also experienced a strategic setback in Syria and the coalition of Arab and Muslim countries has in effect isolated it in the region.
It was a major achievement that the world got united against extremism under the banner of Islam, because the epicenter of this extremism is in Tehran.
So, we are beginning 2016 with these great achievements.
The more France and the world focus on the Tehran regime and its allies as the source of fundamentalism, the closer they get to peace and security.
DAESH can be conquered. However, the first step in doing so, is to defeat Assad’s dictatorship that fosters DAESH with the backing of the Iranian Revolutionary Guards Corps.
We call on the international community and especially France to adopt a firm policy to expel the Iranian regime from Syria, Iraq, Lebanon and Yemen.
World can free itself from fundamentalism only when the clerical regime in Iran, that is the epicenter of fundamentalism, is overthrown. We call on the world community to respect the Iranian people’s struggle for the overthrow of the mullahs.
The Iranian Resistance advocates a tolerant republic based on the separation of religion and state, abolition of the death penalty, and women’s equality in tomorrow’s Iran.

We have come a long and difficult way together. We passed the test of June 17, 2003. We defeated the mullahs and their lobbies’ demonization of the Resistance. We put an end in a 15-year quest to the legal case they had made up against the Resistance.
Thanks to our solidarity, we have had the very positive experience of coexistence between two cultures and two religions.
The mullahs and fundamentalists advance their objectives by provoking enmity towards followers of other religions.
But you and we have demonstrated an exemplary coexistence and friendship.
You have found that the presence of Iranian Resistance members here has brought about friendship and fraternity. And we found that the people of France are friends of Iranians and friends of democratic and tolerant Muslims.
We are capable of doing a lot together. We can do things that are essential to freedom and human rights in Iran, things that are vital to overcome extremism under the banner of Islam, and necessary to protect Camp Liberty residents.
So, we have to multiply our efforts this year.
Thank you and once again, Happy New Year!