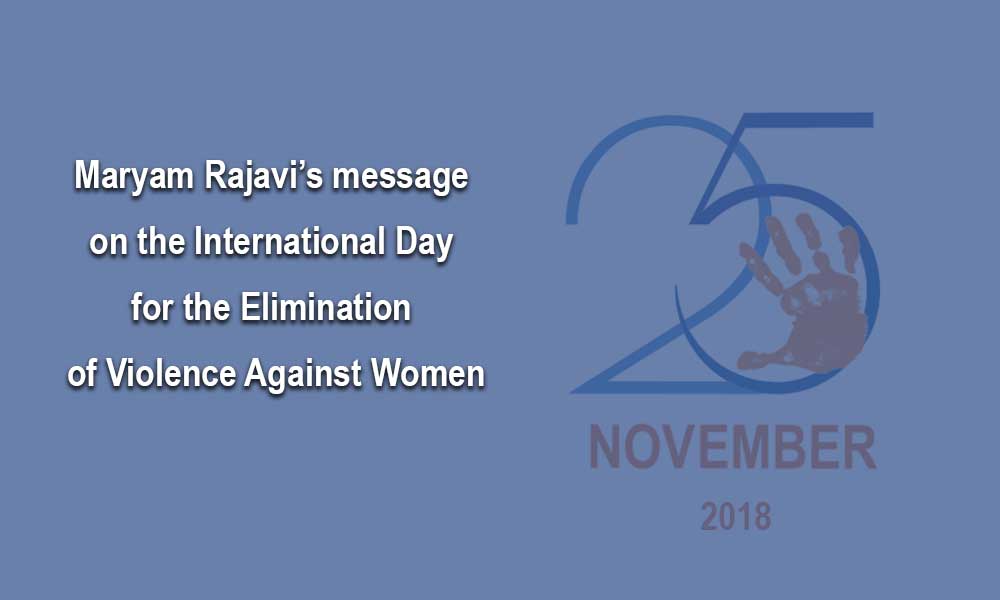 On the International Day for the Elimination of Violence Against Women, I salute all my sisters in Iran and around the globe who have risen for equality and freedom to end oppression and violence against women. I salute all women who have suffered in this struggle, or have been tortured or hanged. The glorious ideal of equality in a world devoid of all forms of gender exploitation, violence and discrimination will undoubtedly be realized through a relentless and unwavering struggle and by paying its heavy price.

Nearly six decades ago, the Mirabal sisters were assassinated in Latin America on November 25. As a tribute to the three slain sisters, November 25 has been designated as the International Day for the Elimination of Violence Against Women. The three sisters, nick-named “the butterflies,” will always be remembered by defenders and advocates of freedom and equality.
Many years later, in our homeland, thousands of butterflies lost their lives under torture or on the gallows, giving their lives to keep the desire for freedom and equality alight.

The torture and executions of tens of thousands of women by the mullahs’ misogynous regime has been unparalleled in the world, and is the most significant and the most heinous case of violence against women in Iran.
The executions of the early 1980s, the massacre of 30,000 political prisoners in 1988, and the murder and hostage taking of 23 PMOI women between 2011 and 2015 in camps Ashraf and Liberty, have revealed the clerical regime’s special enmity to women, and particularly to the PMOI and other women involved in struggle against the regime.

A large number of those arrested during the protests and uprisings which started in December 2017, were women who were tortured and mistreated.
IRGC commander Sanaii Rad, political director of Khamenei’s political ideological bureau, acknowledged that “28% of those arrested in the riots were women.”
The arrests and violent treatment of female protesters continued in the following months, including attacks on female teachers in the protest gatherings of teachers last May.

This ubiquitous violence is enforced against women in all aspects of our country’s social, economic, and political existence. For this reason, it is structured, pervasive, and all-inclusive. The regime promotes, strengthens and preserves it. Therefore, this violence against women has never subsided despite public resentment.

Enmity to women is the clerical regime’s ideology. If it abandons the violence and inequality institutionalized in the regime’s laws and Sharia, if it stops its everyday monitoring and suppression of women for improper veiling, if it halts the abuse and outrage of women prisoners, and if it prevents harassment of women at workplace and public places, then the mullahs would not be able to keep their grips on power.
In this way, millions of Iranian women are subjected to violence, humiliation and abuse on a daily basis.

The most extensive domain where Iranian women experience violence is the regular organized campaigns carried out to enforce the compulsory veil.
Hossein Ashtari, Commander of the State Security Force, has acknowledged that at least 2,000 women are arrested every day in such operations.
Two years ago, the Iranian regime expanded its apparatus in charge of suppression of women by deploying 7,000 “invisible” agents in Tehran, and by initiating a new coordinating institution called, “The National and Popular Veil and Virtue Front,” made of 301 associations and institutes whose duty is to monitor women walking and driving in the streets and whether they properly observe the veil. This is in addition to the 12 ministries and 14 agencies already in charge of systematic clampdown on women.

The regime’s unofficial and plainclothes agents commit horrible crimes and inflict blatant violence against women in these daily operations. One example of such savagery was the 2014 serial acid attacks on women in Isfahan which shocked the nation. Today, international authorities emphasize that the state-backed Ansar-e Hezbollah vigilantes were tied to the acid attacks on women in Isfahan.
Various forms of sexual violence against women, including verbal and physical abuses as well as routine raping of women prisoners as a well-established form of torture in prisons constitute another significant area where Iranian women experience violence.
Women are not free to speak out under the mullahs’ suffocating repression. They cannot speak about sexual abuses particularly when the abuser is one of the regime officials or an agent of security and intelligence services who enjoys immunity before the law and authority to repress and intimidate. As such, they have an open hand in sexually assaulting women. In this respect, Iran is one of the worst countries in the world, today.

Sexual violence against women is rampant at the workplace. The International Labor Organization (ILO) calls this “the poison of work environment.” Work places are openly dominated by this cruel violence against women workers. This is a product of circumstances where women are forced to work 12 hours every day for small wages which are often half and even one-third of the official minimum wage. Women are doomed to endure such circumstances which have been described by regime officials as “new slavery.”
In the absence of any form of legal support, women workers are forced to remain silent and live with the pain of sexual violence in fear of dismissals and scandals under the mullahs’ pervert culture.
The main victims of poverty, high prices and economic bankruptcy are women. Today, the number of women heads of household in Iran surpasses 3.5 million.

Poverty, homelessness, the heavy burden of earning their families’ living, and the gnawing pressure of illnesses, have made women the most vulnerable strata of Iranian society. The number of destitute women who become victims of various forms of corruption, violence and abuse is not small.
Today, all aspects of Iranian women’s lives are intertwined with violence and degradation.
At least 85 women have been executed so far since Hassan Rouhani took office as the regime’s president. Presently, dozens of women are lingering in different prisons on the death row, including in the Central Prison of Urmia and the Qarchak (Shahr-e Ray) Prison in Varamin.
Last spring, the catastrophic news of serial rapes of 41 women and girls in Iranshahr shocked the public. The assailants had public and secret ties to those in power. Consequently, the regime’s officials minimized the crime, the rapists escaped justice, and the country’s General Prosecutor, Mohammad Jafar Montazeri, declared that the Judiciary would prosecute those who disseminated such reports. Simultaneously, a number of youths were arrested for having protested the crime.

The ugly visage of misogynous violence is also seen in early marriages of girl children which have become common place under the mullahs’ reactionary laws and Sharia.
Official figures indicate that 180,000 Iranian girl children are forced into early marriages every year. This is 24 per cent of the total number of marriages per year.

Sexual violence against Iranian women is deeply politicized just as the regime’s dominant policies are profoundly gender-biased. The long list of various forms of violence have stabbed the heart of Iranian society and cannot be remedied unless through struggle for the overthrow of the mullahs’ religious tyranny.

Irrespective of their ethnicity, religion, social class or demographics, women must have the same rights as men in all economic, social and political spheres. Discrimination against women must be abolished in all its forms.

Women must enjoy access to guaranteed judicial recourse in the face of violence, rape, discrimination and deprivation of liberty.
The legal age for girls shall be 18. Prior to this age, girls shall not be subject to criminal punishment.
The law of forced veiling shall be repealed.

Women shall have equal opportunities as men in the labour market. Women must have job security and complete benefits.
Women must have free and equal right to choose, marry or divorce a spouse.
Polygamy is prohibited.

Various forms of violence against women, acts of intimidation or forcible deprivation of their freedoms shall be considered crimes.
Sex trade is prohibited. Trafficking of women and forcing them into prostitution is a crime and those responsible shall be criminally prosecuted.
Any form of sexual exploitation of women under any pretext shall be prohibited and all customs, laws and regulations which allow the parents, guardian or a third party related to a girl or woman to give away the latter to another party for sexual pleasure or exploitation under the pretext of marriage or anything else shall be annulled.

The mullahs’ Sharia laws shall not have a place in the laws of the future Iran.
Emphasis shall be “to repeal all national penal provisions which constitute discrimination against women.”
Appalling and brutal laws such as stoning shall be repealed.

All laws authorizing crimes against women under familial pretexts shall be repealed.
The Iranian people and their Resistance, and particularly their vanguard women, are firmly determined to have this prospect realized.