Maryam Rajavi’s message to the March 8 Demonstration in Washington D.C. 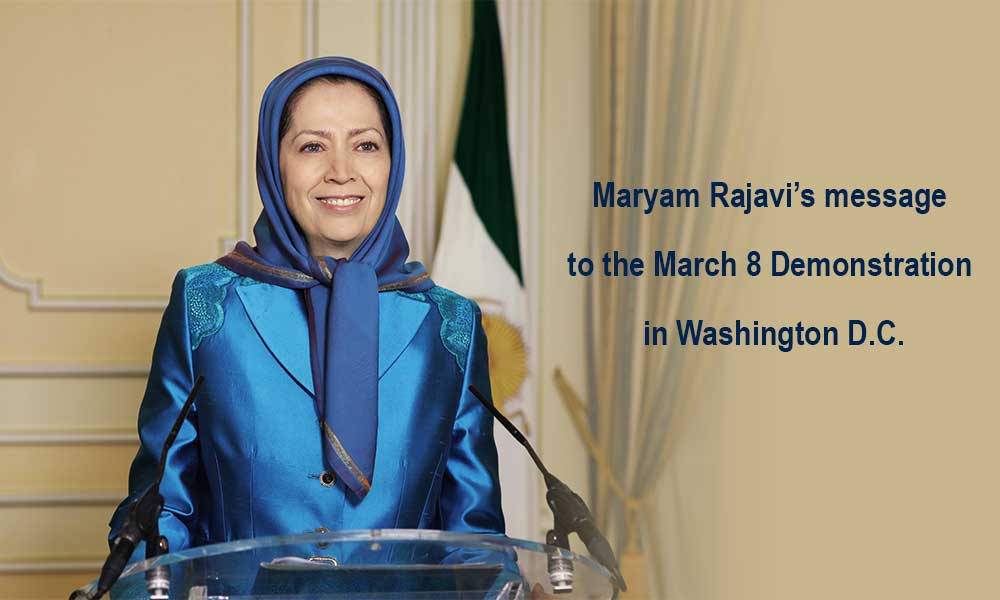 I salute you all. I salute you for your determination to make Iran free, for your love of Iran’s captive people, and for your faith in the glorious future of Iran.

Today is March 8, International Women’s Day. I congratulate all the women the world over who fight for equality.

Especially my sisters and daughters in Iran, who have combined their struggle to overthrow the misogynist regime with their efforts to achieve equality.

On this day, Iran and Iranians take pride in the women of Iran who have risen up and waged one of the greatest resistances of the modern era.

They have given tens of thousands of martyrs, prisoners and torture victims, and for four decades have been active on all the fields of battle.

Women in Iran are on a mission to establish freedom and equality; they are fighting full force to bring down this regime.

The religious fascism that today inflicts such suffering on the world with its terrorism, crimes and warmongering, will ultimately be defeated by these women.

I salute you, my compatriots who are striving to make the voices of Iranian women seeking freedom and equality heard.

On March 8, I call on all women in the United States and around the world to support the fight of their sisters in Iran to overthrow the ruling regime.

Dear friends, fellow compatriots,
Over the past year, our people have staged thousands of strikes and demonstrations.

The younger generation’s enthusiastic response to resistance units demonstrates Iranians’ will to overthrow the regime.

Resistance units are young people and activists who have been organized. Their activities are expanding rapidly throughout Iran.

They are the source of the endurance and prosperity of the organized resistance of the Iranian people inside Iran. And they are the reason those pretenders who neither want nor can afford to pay the price of freedom lack all credibility and fail.

Dear compatriots,
Under the rule of the criminal mullahs, economic and social problems have grown to catastrophic proportions.

So long as the clerical regime is in power, none of these ills will be resolved. The ruling mullahs will become ever more dependent on their devastating policies, namely the suppression of Iranian society, warmongering and destructive meddling in the region, money laundering, terrorism in Europe and the United States, and plundering the assets of the people of Iran.

The velayat-e faqih regime will continue all these policies until the day of its overthrow.

Today, that regime has appointed Ebrahim Raisi, a hated mass murderer and one of the most brutal agents of the massacre of 30,000 political prisoners in 1988 as the head of its Judiciary!

In looking to install a bloodthirsty goon, Khamenei seeks to hide the regime’s weakness in the face of the arisen people of Iran. But he will fail.

Today, the mullahs face a deadly paradox. They need to continue their warmongering and terrorism, but these policies have undermined their regime.

The regime now faces one of the most difficult periods of its rule. The continued uprisings have destabilized the ruling structure. And there is no going back. Change in Iran is within reach more than any other time.

Pay no heed to the absurd assertions of the mullahs and their international supporters, who say that with the overthrow of the Iran regime, there would be no force capable of controlling the situation.

That is a bald-faced lie to preserve the religious tyranny; and it is an insult to the people and resistance of Iran.

There is a democratic and competent alternative, the National Council of Resistance of Iran. A Resistance deeply rooted in Iran which is capable of overthrowing the regime and managing affairs during the transition so that the Iranian people can choose their true representatives through free and fair elections.

The Iranian nation, with 120,000 martyrs, has proven it is worthy of freedom.

The international community is duty-bound to respect the struggle of the Iranian people to overthrow the clerical regime. This is essential for global peace and security.

It is time for the State Department to designate the Revolutionary Guards (IRGC) and the infamous Ministry of Intelligence as Foreign Terrorist Organizations (FTO). Doing so would be a positive message to the Iranian people, and a decisive message against the clerical regime.

It is time for the United States to recognize the trampled rights of the Iranian people to overthrow religious fascism.

The Iranian nation will not rest until it achieves freedom. And surely, it will.