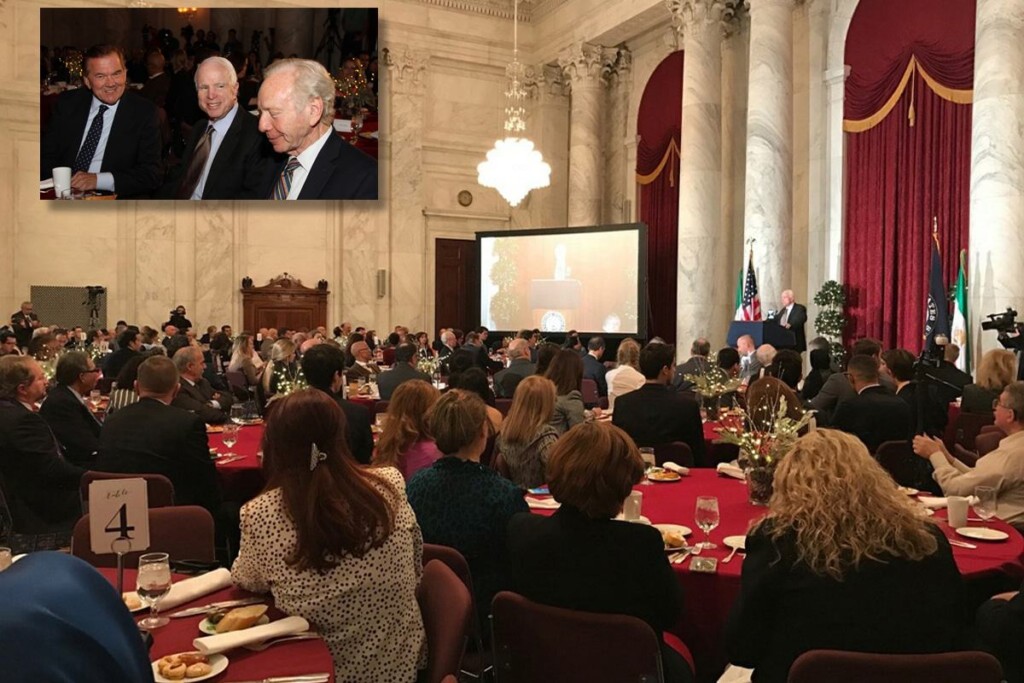 Washington, D.C. – In a briefing held at the Senate Kennedy Caucus Room, senior senators and former national security officials condemned the flagrant violations of human rights in Iran and the clerical regime’s meddling in the region.

They stressed on the need to adopt a firm policy on the religious dictatorship ruling Iran.
The briefing entitled, “New Administration and Iran Policy Options”, was sponsored by the Organization of Iranian-American Communities, OIAC. Senator John McCain (R-AZ) and chairman of the Senate Armed Services Committee; Senator Robert Menendez (D-NJ), ranking member of the Senate Foreign Relations Committee; former Senator Joseph Lieberman, the first U.S. Secretary of Homeland Security and Governor of Pennsylvania Tom Ridge, and Ambassador Mitchell Reiss, former director of policy planning at the State Department, addressed the meeting.
Members of Washington-based diplomatic missions as well as representatives of the American and international mass media attended the briefing.
In a video message to the briefing, Maryam Rajavi said:

Dear friends,
This Christmas, in celebration of the birth of Jesus Christ, the messenger of peace and solidarity, I wish all of you, who have gathered for today’s meeting, health and prosperity.
First, let me offer my warmest appreciation to U.S. senators and distinguished personalities for supporting the cause and struggle of the Iranian people for freedom, democracy and the rule of law.
I would also like to sincerely thank the elected representatives of the American people for their support for the freedom fighters of Ashraf and Liberty and for shielding them from danger and relocating them to Europe.
The 37-year-old experience of the destructive and murderous mullahs’ regime in my country has shown that no degree of political and economic concessions, which have been carried out at the expense of the Iranian people, have led to a change of behavior or policies of the Iranian regime either inside or outside of Iran.
Quite the contrary, the situation has been worsening in every aspect.
During Rouhani’s so-called “moderate” presidency, more than 2,600 people have been executed.
According to the United Nations, this marks the largest number of executions in the past 25 years.
In order to create an atmosphere of repression and fear in society, the clerical regime has been executing a large number of victims, in public places.
At least 70 women have been hanged during Rouhani’s term.
Despite a decline in sanctions and transferring a considerable amount of cash to the mullahs’ pocket, the Iranian economy is suffering from recession.
Bureaucratic and government corruption, and astronomical stealing by regime officials, appear to be endless.
The Iranian economy is under the control of the regime’s supreme leader Ali Khamenei and the Islamic Revolutionary Guard Corps.
They are the only one who will benefit from trade with Iran and not the Iranian people.
The clerical regime has been continuing its ballistic missile tests in violation of UN Security Council resolution 2231.
In the region, the regime has used all its might to save the criminal dictator of Syria. Currently, more than 70,000 regime forces, including the IRGC and its agents are involved in the massacre of innocent people in Syria, especially in Aleppo.
These days, the regime is talking about establishing naval bases in Yemen while continuing its sectarian policies in Iraq.
Under such circumstances, there is no doubt that fighting fundamentalism and extremism under the banner of Islam either Shiite or Sunni, can only be made possible through confronting the Iranian regime which is the godfather of fundamentalism and terrorism.
In other words, fighting against ISIS cannot be separated from confronting this regime.
When the clerical regime is pushed back in the region the world will get that much closer to destroying ISIS.
The only path to democratic change in Iran is to rely on the Iranian people and their organized resistance.
The Iranian resistance is fighting with all its power to establish this goal and we hope that the United States congress will continue its support for the Iranian people in their quest for a free Iran.
The dossier of the flagrant human rights abuses in Iran, especially the case for the massacre of 30,000 political prisoners in 1988, must be referred to the UN Security Council for the adoption of binding punishments.
Nuclear and missile program is against Iranian people’s interest and must be stopped.
The clerical regime must be evicted from Syria, Iraq, and, the IRGC must be placed on the list of terrorist organizations.
The Iranian people, with more than a century-long struggle for democracy and liberty, deserve a government that respects their fundamental rights.
These rights include the freedom of expression, free elections, gender equality and equal rights for religious and ethnic minorities.
Such a country would be the herald of peace and tranquility in the Middle East.
This is our vision for Iran’s tomorrow.
Thank you.