Maryam Rajavi: Women are the force for change, and they are going to defeat the mullahs’ reactionary religious dictatorship 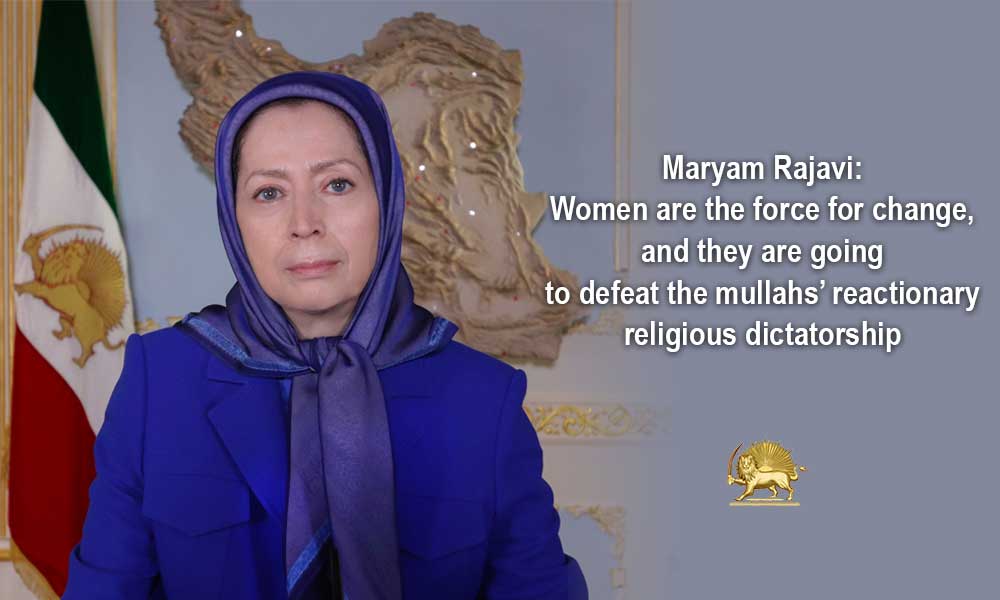 Heroes who have shaken the regime to its foundations,
My dear daughters who have infuriated the enemy with your heroism,
The blood of more than 600 martyred protesters shot to death by Khamenei’s revolutionary guards and the rebellion that expanded to 187 cities across the country inspire all of us to continue the uprising to topple the ruling religious fascism.
The courage exhibited by women and men and young people, and your sacrifices, have affected the grieving cities. Rebellious cities have risen up in our fettered nation and shanty towns have become hotbeds of revolution and rebellion.
Hail to our rebellious cities who compete in breaking out of the mullahs’ occupation. From Shiraz and Sadra to Shahriar and Islamshahr, to Sirjan, to Isfahan, to Karaj and Fardis, to Marivan and Sanandaj, to Javanroud and Kermanshah, and to Behbahan, Mahshahr and Bushehr, and other rebellious cities.
Iran’s cities are rising up one after the other and everywhere; women actively participate, leading and supporting the protesters. We had already said that women are the force for change and will defeat the mullahs’ reactionary and religious tyranny.

Now, look at the scenes of the uprisings. See, how our courageous sisters encourage people to protest and rebel, and lead the protesting units.
The clerical regime’s Interior Minister said, “In the streets, two to three hours after the sunset, we encountered some forces in these places who operated as units comprised of five or four or six persons. Usually, they were accompanied by a woman who encouraged others and invited them to join the protest.” The regime’s experts said, “In various parts, especially in Tehran suburbs, women, between 30 and 35 years of age, had a special role in leading the riots… Women’s special role in leading the recent riots seemed remarkable.”
Yes, it is remarkable, indeed. The arisen women of Iran have come to the battle field to bring down the regime.
The mullahs have seen themselves on the brink of collapse. They want to evade this fate by committing crimes. They shoot young people in the head and chest. They strike the wounded in the streets with the axe. They shoot people from rooftops and they slaughter teenagers, just 13 or 14 years of age, making massive arrests which still continue.
The number of those arrested is so high that the mullahs’ parliament deputies have admitted the arrest of some seven to eight thousand people. The actual number, however, exceeds 12,000. The arrests have been so numerous that in the early days they used grade schools to house those detained.

In the meantime, the names of more martyrs are being verified. The Revolutionary Guards snatch the wounded from hospital beds and prevent the treatment of the severely wounded. Security forces haul away the bodies of martyrs from the morgues to conceal the scale of their massive bloodshed.
Despite such brutality and ruthlessness, Khamenei is having nightmares over the regime’s downfall. He knows well that the volcano of rage and fury which flared in this uprising all across Iran is moving towards his headquarters. So, he has set aside any restraint and weighed in personally to command the killing operation.
Hassan Rouhani, Khamenei’s president, has been also backing and praising the revolutionary guards, the paramilitary Bassij, and the murderers of Iran’s youths and teenagers. As admitted by the regime’s officials, his cabinet includes the largest number of Intelligence Ministry officials in the past 40 years. Now, he says, “I bow to them for their efforts (i.e. slaughter of protesters).”
The IRGC has admitted that this uprising has spread to hundreds of cities. The uprising cannot be contained no matter how brutally they suppress it, or how many brave and rebellious protesters they butcher. The uprisings of December 2017-January 2018, and the uprising of August 2018 were also suppressed by Khamenei, but they gave impetus to November 2019 uprising.
The difference is that the leading role of rebellious women and youths, who no longer tolerate the 40-year oppression of the criminal mullahs, and the sacrifices made by hundreds of martyrs, have enhanced the Iranian people’s resolve to revolt and rebel a hundred times more. As the Iranian Resistance’s Leader Massoud Rajavi said: “The Iranian people and Resistance paid a heavy, bloody price to achieve this enormous and irreversible leap forward.”
This is why Khamenei issued his six-point directive to the Bassij, urging it to be on alert in all neighborhoods and stay ahead of the enemy.
Yes, this is meant to confront the campaign to overthrow the regime, which Khamenei clearly sees on the horizon.
The Iran uprising cannot be extinguished. The battle of Iranian people, resistance units, and the great Liberation Army will march forward and end the ruling religious tyranny.

The people of Iran have risen up to bring down this barbaric regime. Now is the time for the international community to stand up to the regime. The United Nations must immediately dispatch fact-finding missions to Iran to investigate the scale of crimes against humanity and visit those arrested. And the world must recognize the Iranian people’s Resistance and uprising to overthrow the mullahs.

I urge my sisters and daughters across the country to:
1. Strengthen your resolve and become a hundred times more determined in leading and commanding the rebellious units. The more you improve your role in commanding the protests, the more durable and powerful the uprisings will become.
2. Encourage the fighting spirit and valor that characterize the young people participating in these admirable uprisings. The bravery, fearlessness, and roaring rage displayed by Iran’s younger generation have forced the mercenaries of Bassij and IRGC to flee the scene everywhere.
3. Aid and facilitate the treatment of those wounded in the uprising, particularly the youths who cannot go to hospitals due to security reasons.
4. Assist and support the parents of martyrs and the families of those arrested.
5. Inspire our fellow compatriots to actively participate in funeral services to commemorate the martyrs and protest the detention and torture of protesters.