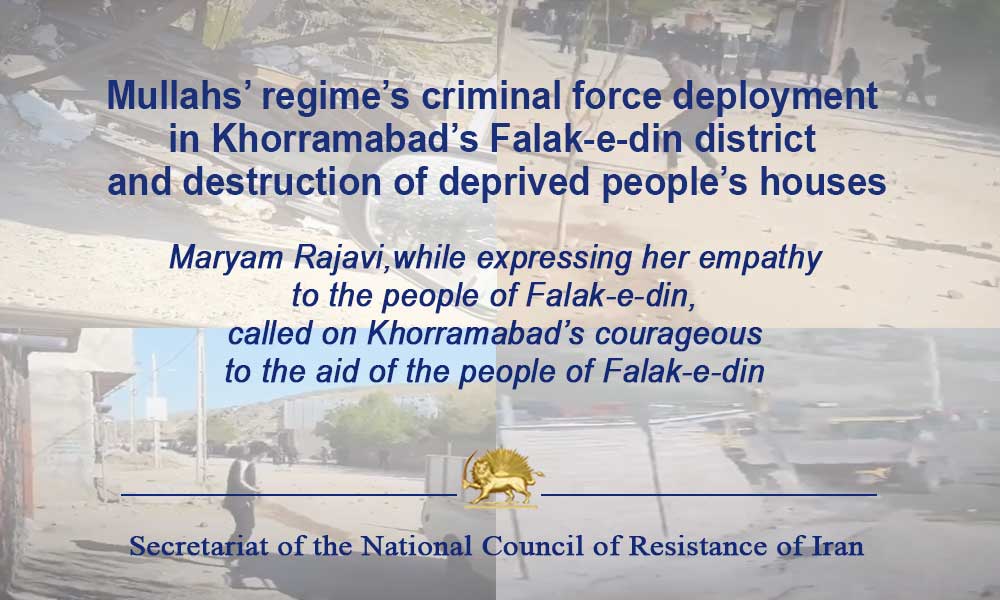 Accompanied by vast numbers of repressive forces, Khorramabad’s prosecutor invaded a poor district of the city called Falak-e-din on Tuesday April 14 and began destructing houses built by the deprived people with their own means. They began beating residents not willing to leave their houses and injured several elderlies under the houses’ rubble.

Destructed houses belonged mostly to people who had lost their houses during last year’s floods. They had built these makeshift houses with their own means despite their living under poverty line and their deprivation of the least income or living material.

The youths of the neighborhood resisted the destruction of the houses by the repressive forces, the Special Units and Basij forces, by beating and using air shots dispersed them. The youths threw stones at the police and Basij forces and broke the vehicles windshields of the attacking forces.

Today, Mohammad Sharifi Moghaddam, regime’s mayor of Khorramabad, in fear of the public’s outrage over the criminal attack by regime forces, told the state official news agency, IRNA, “Given the Coronavirus outbreak, and the focus of the offices and public services in trying to solve this crisis, some fixers tried to abuse the circumstances and had built (houses) without obtaining necessary permits…The municipality has only tried to impose the regulations and has not taken any action beyond the legal requirements.”

Mrs. Maryam Rajavi, the President-elect of the National Council of Resistance of Iran (NCRI), while expressing her empathy to the people of Falak-e-din, called on Khorramabad’s courageous to the aid of the people of Falak-e-din and said that the destruction of the home of the deprived people in the midst of the Coronavirus crisis is another sign of the cruelty of the criminal mullahs, who only think about preserving their theocracy. This regime, instead of providing for the livelihoods of the impoverished and quarantining them, it is waging a campaign against them, and destroying their homes that have been built with basic equipment and much hardship.

Secretariat of the National Council of Resistance of Iran
April 15, 2020