Maryam Rajavi on #Nowruz celebration: The New Year can and must be turned into a year full of uprisings 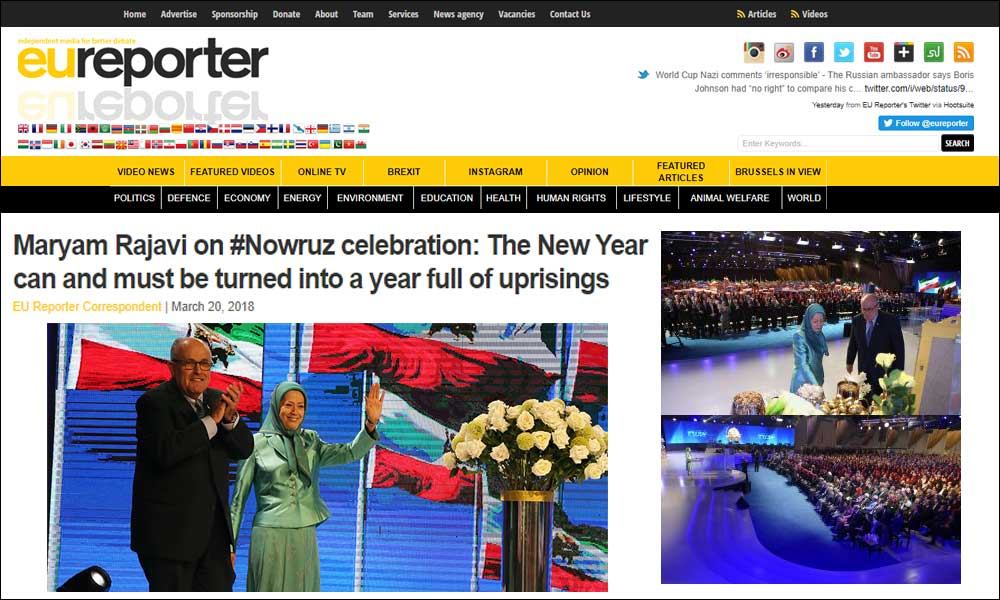 The major gathering of thousands of members of the People’s Mojahedin Organization of Iran (PMOI/MEK) was held in Tirana, the capital of Albania.

In addition to Rajavi, it featured Rudy Giuliani, former Mayor of New York and advisor to the US President on cyber security, as well as Pandeli Majko, senior Minister of State and former Prime Minister of Albania.

According to Rajavi “The critical situation of the mullahs’ regime is a product of the Iranian people’s historic resistance.

The Iranian people have never accepted this regime. The time is up for protecting this decadent regime and the uprising will continue until final victory.”

The President of the National Council of Resistanceof Iran, the coalition of Iranian oppositionmovements, called attention to Iranian Supreme Leader Ali Khamenei’s admission that “the force inciting protests in Iran is the People’s MojahedinOrganization of Iran.” Approximately two weeks after the outbreak of nationwide protests in late December, Khamenei issued a public statement placing much of the blame for those demonstrations on the MEK, which he described as having planned and promoted the gatherings over a period of months.

Rajavi also commented on the policy of the West on Iran and said “Europe’s long-overdue focus on the threats posed by the Iranian regime’s regional warmongering and its ballistic missile program is of course a positive step.

Further steps are needed, including the expulsion of the regime from the region, shutting down its missile and uranium enrichment programs, and blocking its access to the international banking system.

All these steps are necessary.

However, a comprehensive, decisive, and strategic response to the regime entails standing with the Iranian people and Resistance, and recognition of their struggle for regime change, and the democratic alternative to the regime, i.e. the National Council of Resistance of Iran.”

“The people of Iran demand immediate action, change, overthrow, and freedom,” she continued.

“They demand bread, jobs, and housing.

They demand the immediate abolition of all government coercions, including the compulsory hijab.”

Mayor Giuliani described the MEK members who have been struggling against the clerical regime for decades, in particular those who withstood all the sufferings and plots in Camps Ashraf and Liberty inIraq for 14 years, as true heroes.

He underscored his support for the resistance of the Iranian people to establish democracy and human rights and praised the role of Mrs. Rajavi in leading the Iranian resistance movement.

“Next year we will witness major changes regarding Iran,” Giuliani said. “The corrupt regime of the ayatollahs is on the verge of collapse.

The US policy, unlike the policy of the previous administration that was trying to appease the mullahs, is to hold them accountable for its crimes inside and outside of Iran and also to support the legitimate demand of the Iranian people for regime change and establishing democracy and human rights.”

Mr. Giuliani added: “One of the biggest lies that the clerical regime disseminated over the years is that the MEKlacks popular support inside Iran. We had many reasons to repudiate this claim.

The massive support of Iranianexiles from this organization and its annual gathering with more 100,000 people taking part, left no room for these lies.

These and similar cases indicate the massive and growing social base of the MEK inside the country.”

Prior to the New Year celebration, Mrs. Rajavi and Mr. Giuliani met on Sunday, March 18.

During the meeting they discussed the crisis-prone status of the clerical regime, particularly subsequent to the nationwide uprising of the Iranian people, characterizing that regime as having entered the final phase of its hold on power.

They also underscored the need for a firm policy toward the regime.

According to Mrs. Rajavi, the Iranian people’s nationwide uprising clearly and vividly expressed their desire for regime change and their refusal to be satisfied with anything short of the overthrow of the clerical regime.

Thus, the time has come for the world to respect this and to recognize the democratic alternative to this medieval regime.

Giuliani noted that unlike other countries in the region, there is an alternative to the ruling regime in Iran.

Thus, Giuliani added, its overthrow will lead to peace and tranquility in a region that has been severely threatened by the clerical regime.

He reiterated his support for the Iranian Resistance under the leadership of Mrs. Rajavi and for regime change leading to freedom and democracy.